Recovering Women's Reproductive Lives, One Mutilated Record at a Time

Catherine Prendergast is a Professor of English at the University of Illinois at Urbana-Champaign, a Guggenheim Fellow, and a Fulbright Scholar. Her latest book and first work of narrative nonfiction is The Gilded Edge: Two Audacious Women and the Cyanide Love Triangle that Shook America. 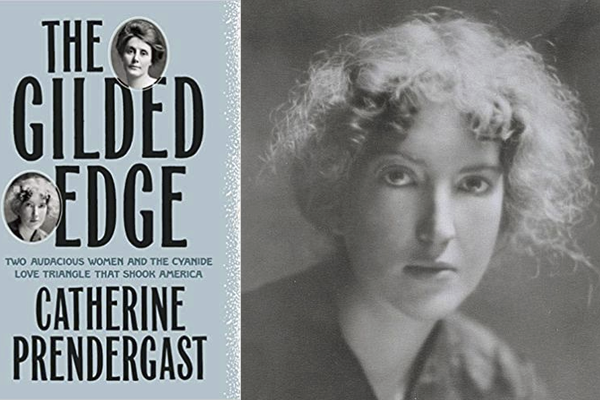 In 2017, I stumbled upon a searing letter by poet Nora May French to her boyfriend, in which she confesses she is aborting her pregnancy by him. The letter, written in 1907, was located in the papers of that boyfriend, literary journal editor Henry Anderson Lafler, in the Bancroft Library of UC Berkeley. Remarkably, French wrote it while she was self-administering her abortion. She explained to Lafler that she had bought the pills the previous Friday, taken them on Saturday, and was on Sunday finally feeling the cramps that suggested the end of her pregnancy was near. The pain she was in as she wrote was evident not only in her description of having to suppress screams, but also in her handwriting; her pencil nearly etched the paper.

I found the letter immediately compelling and wanted to learn more about Nora May French, as her 1907 death by cyanide was such a central event in the book I was writing about the renowned literary colony at Carmel-by-the-Sea. Yet I worried that there were too few other documents available about her life to do it justice. With no collection under her own name, French’s letters and manuscripts are scattered amidst the papers of her male associates and relatives. Unlike the well-known (and even not so well-known) men of this early twentieth literary super-group which included Jack London and Upton Sinclair, there seemed to be few finding aids listing her correspondence or manuscripts. This despite French’s fame in her day. She had published in all the major journals in California and several national ones; a poem of hers was once featured on a full page of the newspaper, the San Francisco Call. Because of her prominence, her death at the Carmel home of poet George Sterling was reported nationally. Subsequently, imitators as far away as New York City killed themselves with scraps of her poetry on their person.

As I spent the next few years traveling to archives looking for more documents related to French, I discovered that letters by or about her had often been altered in some way. In a letter from Ambrose Bierce to George Sterling I found in the Berg Collection at the New York Public Library, four words that were clearly about French had been crossed out and rendered indecipherable. Other letters had been ripped in half. Sensing a pattern, I returned to her letter about her abortion and noticed for the first time that it appeared to end in mid-sentence. Someone either lost or removed a page or pages from it. As Lafler’s papers were acquired by the Bancroft Library from collectors who had every interest in preserving the original material whole, the letter was likely altered by Lafler himself.

Letters written by the Carmel group that do survive suggest that protecting reputation was a primary concern of its members. They wrote to each other about bad press often and advised each other how to avoid it. Frequently, they asked each other to burn letters after reading them. In working hard to avoid scandal, they were not only protecting themselves. Carmel-by-the-Sea was not, as has been popularly remembered, a spontaneous gathering of writers who just happened to settle together on the same one mile square on the Monterey Peninsula. The town was in fact the product of a for-profit land development scheme. The Carmel Development Company had recruited Bohemian writers to live in Carmel to create “buzz” about what was then a nearly barren stretch of land. Scandals like adultery created bad publicity not only for the writers, but for the development as well, hurting the company’s ability to market to the wealthy and status-conscious of San Francisco.

The pressure to protect individual and corporate reputation meant that the truth of women’s reproductive lives was suppressed. The theme of pregnancy as a danger to social standing emerged again and again in my research. Nora May French had two abortions; the self-administered abortion was her second. She alluded to her first--a “therapeutic” abortion performed by a doctor--in a poem never published during her lifetime. An oral history about the Carmel group divulged the story of another woman who travelled to San Francisco and “miscarried” there. Likely, she also had an abortion. Another letter I found by a married woman begging her (also married) lover to accept the child she is carrying and love it "boy or girl” was unsigned. The outcome of that pregnancy was unclear as there was no additional correspondence pertaining to it I could find.

By the time I finished research for The Gilded Edge, I found that the Carmel literary group had lied to the newspapers, each other, and even their own diaries in the service of building their legends. So conscious were they of posterity, they acted to prevent their secrets from emerging even after they died. When George Sterling was found dead of cyanide in 1926, a pile of ashes was discovered on his desk. Who knows what evidence of women’s lives were in that pile? I had gone to the archives to discover truth, but I had to first wade through the various screens that had been set up to hide it.

The stakes for building on the existing histories of women’s reproductive lives could not be higher. We know a great deal about the limitations placed on women by studying the history of the legislation of abortion, much of it from Leslie J. Reagan’s groundbreaking 1997 book, When Abortion was a Crime. We know abortifacient pills were widely available in drug stores at the time Nora May French lived, although they contained noxious chemicals such as turpentine that could end a woman’s life as well as her pregnancy. We know that because of Comstock laws outlawing the circulation of “lewd” material through the post, abortifacients were typically advertised under euphemisms  such as “bringing on regularity.” And we know that mid-wives, frequent providers of abortion services, were often arrested or driven out of business.

What we don’t know, however, is much about the women who sought abortions. We lack stories of what it was like for women to buy and use abortifacients. We have few descriptions of surgical procedures from the point of view of the women undergoing them. Without first-person accounts of such events—events so determining of the course of women’s lives—we cannot fairly give an account of women’s history, nor derive from it the lessons that are desperately needed at the present when restrictions on reproductive freedom are returning in full force.

In the end I had to travel thousands of miles to archives in five different cities to find documents by or about Nora May French—all of which were located in collections of men. These men had mutilated several of these documents not because French’s life was of no consequence, but because it too readily exposed their own flaws. Considering this, I wonder if scholars and archivists cannot put in more effort to identify items pertaining to women in finding aids, rather than relying on stale notions of notoriety to signal holdings of interest. Far too often, archives resemble graveyards with marked tombs for men in which a few bones of women are scattered. It’s time to dig up all of the bones and ask them what story they tell.