For Constitution Day, Let's Toast the Losers of the Convention

Richard Hall is the Director and Co-Producer of the four-part series, Confounding Father: A Contrarian View of the U.S. Constitution (2020). Recently retired after a thirty year career with C-SPAN, he spent the final eleven years working as a video journalist with American History TV where he conceived and produced the weekly archival film series Reel America, and created over 200 episodes of the documentary series American Artifacts. He is now an independent filmmaker living in Silver Spring, Maryland, and is also the director and co-producer of American Feud: A History of Conservatives & Liberals (2017). 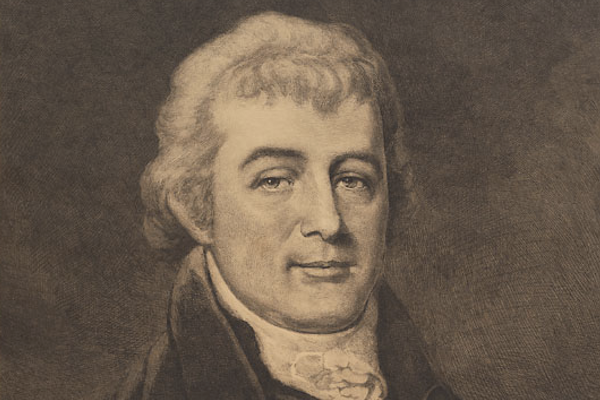 The earliest critics of the U.S. Constitution struggled against aspects of a document with many avoidable flaws, mistakes that haunt us to the present day. Go back to that hot room in the summer of 1787. How many of us would endorse the Electoral College? The three-fifths clause? The fugitive slave clause? The continuation of the African slave trade for 20 years? An Executive elected with no term limits? A ban on paper money? Vast Presidential pardon powers? An ineffective and nearly impossible to complete impeachment process?

In this era of highly charged debates over how we study American history, I suggest we mark Constitution Day not by bowing at the feet of Madison, Hamilton, and Washington, but by remembering those who lost. Several skeptical delegates left Philadelphia earlier than the September 17, 1787 signing day. One was Luther Martin of Maryland.

Martin was a difficult man. Imagine a cross between Ralph Nader, George Wallace, and Hunter Thompson. Catherine Drinker Bowen labeled him the “wild man of the convention.” We created the four-part documentary series, Confounding Father: A Contrarian View of the U.S. Constitution because this fascinating man was, in the words of eminent revolutionary era historian Gordon Wood, “full of predictions and most of them came true...” We would all have been better served if Martin and other gadflies like Yates and Lansing of New York had stayed until the end of the convention, as much was decided without them.

“Happiness is preferable to the splendors of a national government...”

According to Bill Kauffman, author of Founding Father, Drunken Prophet: the Life of Luther Martin, this statement was a plea to the framers of the U.S. Constitution for a modest American confederation. Luther Martin thought the leading framers lusted to create an empire that would compete with European powers. Strange as it may seem from the 21st century, he and many opponents of the Philadelphia convention did not want that. For Luther Martin, empires inevitably led to unhappiness and ruin. Might we have been more like Canada or Switzerland?

One of Martin's prescient predictions was that Washington DC would become isolated and removed from the people because the House was too small and members would soon neglect their constituents. Many have indeed come to feel that what happens “inside the beltway” is removed from their lives and concerns. In our documentary, historian Woody Holton calls this an “invisible wall.”

In one of his many appearances in the series, biographer Bill Kauffman recites Martin's anti-slavery words from an August 1787 convention speech:

“The continuance of slavery ought to be considered as justly exposing us to the displeasure and vengeance of Him (God) who is equally lord of us all and who views with equal eye the poor African slave and his American master.”

Kauffman is quick to remind us that Martin owned six slaves at the time. However, given an opportunity to go back in time to speak in that room, wouldn't we similarly challenge the slavery protections?

In her ground-breaking book Madison's Hand: Revising the Constitutional Convention, Mary Sarah Bilder suggests that James Madison, the sainted “Father of the Constitution” may have actually put some of Martin's anti-slavery words into his own mouth.

Madison records himself arguing against the slave trade continuing for 20 years on August 25, 1787:

“...so long a term will be more dishonorable to the National character...”

Bilder notes the suspicious use of the words “dishonorable” and “character,” and suggests these uncharacteristic anti-slavery statements by Madison were not really uttered in Philadelphia but were inserted later as he revised his notes of the convention to make himself look better. If Madison wanted to sound like Martin, perhaps the legacy of this forgotten, drunken founder warrants a more in-depth look?

Martin's bold criticisms of the Constitution's framers were printed in the rambling pamphlet, The Genuine Information. This was an important source for many of the so-called Anti-federalists (who called themselves the true Federalists) during the ratification debates – but is admittedly not especially quotable or well written.

“He (Martin) thought the federal convention should have done what it was authorized to do: and that is to propose amendments to the Articles of Confederation. He thought it was much smarter to fix what was broken, and to give new powers sparingly...because it was always easier to give power, than to take it back.”

As it happened, it took a Civil War and 700,000 dead to create a more perfect union with the 13th, 14th, and 15th amendments – yet those gains are not necessarily guaranteed and many are under threat in the 21st century. Our work is not done.

Luther Martin was attorney general of Maryland for most of his adult life, argued important cases before the Supreme Court, and was an alcoholic who spent his final years as a pauper in the home of Aaron Burr – another unpopular figure in American History. Remarkably, Martin died on July 10, 1826 – just six days after the passing of Jefferson and Adams on July 4, 1826. He's buried in an unmarked grave under a playground in Lower Manhattan.

We are currently mired in absurd debates over criticisms of the more revered Founding Fathers. Our mantra during production of the film was: The more we elevate the founders, the more we diminish ourselves.

We don't deserve it.

On Constitution Day, I say drink a toast to the losers. After all, some of them agitated for a Bill of Rights, a proposal that was rejected by the framers in September of 1787. Let us study their criticisms of our imperfect system. Imagine what might have been and what might be as the republic suffers in a realm of political dysfunction caused in no small part by our odd framework of government.