Memo From Irish History: Welcome to Your Future, American Women

Laura Weinstein holds a master's degree in Irish Politics and a PhD in Irish History. She is a writer and a historian, and she currently works at Macaulay Honors College at Queens College-CUNY. 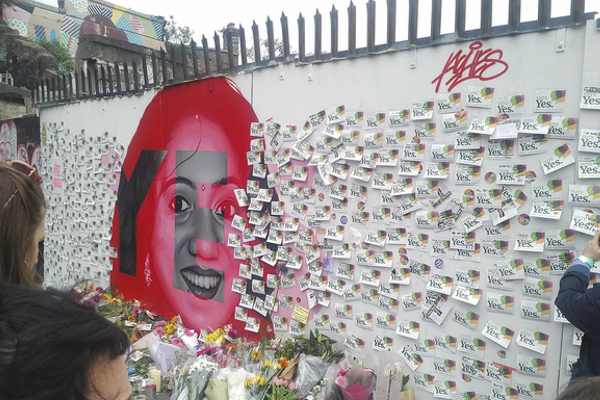 A memorial to Savita Halappanavar, Dublin, 2018. Halappanavar died in 2012 of sepsis related to a miscarriage because her doctors, fearing prosecution under Irish abortion law, delayed performing life-saving surgery. The mural calls for a "yes" vote on a referendum to overturn Ireland's Eight Amendment, which established a fetal right to life and committed the state to its defense. Photo Zcbeaton, CC BY-SA 4.0

A misogynistic new anti-abortion law took effect in Texas on September 1st that imposes the strictest limitations on access to abortion in the entire United States. According to the law, pregnant people–who, despite the text of this legislation, may or may not be “women” in the sense that they are adult human females who self-identify as such–must recognize that they are pregnant and procure an abortion by the gestational age of six weeks.

The now-infamous law deputizes private citizens to snitch on their friends and neighbors in a manner akin to witch hunts. It incentivizes such snitching (in the form of “civil suits”) with the promise of a $10,000 reward if the accused is found guilty of providing or aiding and abetting an abortion after six weeks’ gestation.

It may be difficult for many Americans to envision a world in which pregnant women and girls are seen as the tools of men and/or of the state, because Roe v. Wade has been the law of our land since January 1973. But as a historian of modern Ireland who wrote her dissertation on sexual assault, I understand this world all too well. Americans can and should learn what the Texas law means in practice. It means that in the state of Texas people with male bodies can exercise full autonomy over themselves, including their sexual choices and the consequences thereof; people with female bodies cannot.

In the Republic of Ireland, however, all living adults remember the time prior to 2018 when abortions, which had already been illegal in Ireland for over a century, were banned more forcefully under the Eighth Amendment of Bunreacht na hÉireann, the Constitution of Ireland. Indeed, that document read, “The State acknowledges the right to life of the unborn and, with due regard to the equal right to life of the mother, guarantees in its laws to respect, and, as far as practicable, by its laws to defend and vindicate that right.”

Under this amendment, Irish women’s bodies were not their own; the state claimed the right to force a pregnant person to give birth. This policy instrumentalized women as not fully human individuals; rather, in the words of philosopher Martha Nussbaum in her book Sex and Social Justice, pregnant people were “means to the ends of others.”

For much of the history of independent Ireland, the state concerned itself with showing Irish Catholic morality in contrast with the alleged immorality of Britain, its former colonial master. As a consequence, the sexual ethics of Irish people, especially Irish women, became the focus of the Catholic church in alliance with the government. In fact, as historian James M. Smith has written, this alliance worked to “contain” sexuality in such a way that Irish women could be seen as “pure” and Ireland could be portrayed as a place where immoral sexual acts such as fornication, rape, and abortion did not occur.

Of course, these acts occurred regularly, but the goal was to keep such immorality out of sight by pretending it did not exist. The most odious methods by which “immorality” was hidden involved either (1) confining such “immoral” girls and women to the now-notorious Magdalene asylums where “fallen” girls and women lived out miserable lives, or forcing them to reside and give birth in “mother and baby homes,” where they were similarly removed from the eyes of society.

The consequences of “containing” sexuality in Ireland are myriad and have been detailed by many historians, including myself, in other places. Here we are concerned only with the consequences these policies had on the lives of pregnant girls and women, as this is the horror show that is about to ensue in Texas and other states that will inevitably pass similar statutes now that the Supreme Court of the United States has allowed the Texas law to take effect. In order to make the comparison clear and relevant, I will focus on cases that occurred in Ireland in the past thirty years.

In 1992, a fourteen-year-old girl publicly referred to as X was raped by a neighbor and became pregnant. The young girl was suicidal as a result of the rape and pregnancy.  So, the girl’s parents decided to take their daughter to Britain to have an abortion. Before they did so, though, her parents contacted the gardaí (the Irish police) to inquire if fetal tissue obtained after an abortion would be admissible as evidence of paternity at the rape trial. Guided by the Eighth Amendment’s declaration that the state had to “vindicate” the “life of the unborn,” the state issued an injunction that compelled X to return to Ireland before the abortion was performed. The Irish High Court interpreted the Eighth Amendment to mean that the government was obligated to seek her return to Ireland and keep her in the country until she gave birth. In the end, President Mary Robinson invoked her power to refer the X Case to the Supreme Court, which reversed the High Court’s decision and lifted the injunction (by which point this was irrelevant because X had already had a miscarriage).

In 2010, cancer patient Michelle Harte discovered that she had accidentally become pregnant. While her oncologists advised her to have an abortion, the ethics committee of Cork University Hospital said that she was not eligible for an abortion in Ireland because they did not believe that Michelle’s life was in “immediate threat.” In the meantime, cancer treatment was stopped because of the pregnancy, and Michelle frantically gathered together the resources to travel to Britain to obtain an abortion. She was reportedly so weak by the time she was ready to travel that she could not board the plane without assistance. A writer for the Irish Times noted, “...the fact that [Michelle’s] life was at risk as a result of pregnancy wasn’t just a matter of probability: it was a medical certainty.” In Harte’s case, the “rights” of a fetus were given equal consideration to the dire need of the woman for cancer treatment.

Although these cases certainly aroused the fury of Irish women and their allies, the death of Savita Halappanavar in 2012 was the moment everything changed in Ireland. Savita was a 31-year-old woman who was seventeen weeks pregnant when, in October 2012, she presented at a Galway hospital in the middle of a miscarriage in which the gestational sac was already protruding through her cervix. Fetal death was imminent, but the doctors, fearing the wrath of the Eighth Amendment, did not perform a surgical abortion because there was still a fetal heartbeat. By the time they did perform the procedure, Savita was suffering from septicemia and she died a painful death that was entirely preventable if the doctors had not feared the legal consequences of providing appropriate treatment for their patient.

Americans, welcome to your future.

The outcry following Savita’s death galvanized the movement that eventually culminated in the repeal of the Eighth Amendment to the Irish constitution in May of 2018. The role of the Catholic church in Ireland had been declining for many years at this point, as the role of women in the public sphere had been expanding. Still, it took the tragic death of a young woman to finally force the policy to change in Ireland. Unfortunately, ultra-conservative members of the U.S. Republican Party are heading in the opposite direction, and American girls and women will suffer the same fates that these Irish women suffered.

Elizabeth Nash, state policy analyst for the Guttmacher Institute, told the New York Times that “Health providers will be very conservative about interpreting the law, because they don’t want to cross a line.” This fear will lead to the premature or preventable deaths of pregnant cancer patients like Michelle Harte, as doctors struggle to understand when an abortion beyond six weeks gestation is considered medically necessary under the law.

The Texas law will likely lead to cases that resemble the tragedy of Savita Halappanavar, the woman who died of a septic miscarriage because her doctors were afraid of being prosecuted for performing an illegal abortion, even though Savita’s pregnancy was clearly no longer viable when she presented at the hospital in Galway. How many girls and women like Savita will present at Texas hospitals with similar cases? How many of them will die?

The Texas law will force questions about the right of girls and women to move freely around the state, as people who drive girls and women to abortion clinics are considered to be “aiding and abetting” the illegal procedure. Uber and Lyft have promised to pay the legal fees of drivers who are accused of aiding and abetting in this fashion, which is commendable, but their pledge is really beside the point. Will pregnant people be enjoined from leaving the state to procure an abortion, as was the girl-child X in Ireland in 1992? If not, is the law really intended to punish indigent girls and women?

Protests over the X Case occurred on both sides of the Atlantic Ocean, with protesters holding posters that read “Ireland Defends Men’s Right to Procreate By Rape.” The Texas law may similarly be interpreted to allow sexually violent men to force girls and women to carry pregnancies to term. Although the text of the law reads that “a civil action under this section may not be brought by a person who impregnated the abortion patient through an act of rape, sexual assault, incest, or any other” criminal conduct, the law does not specify whether the criminal act must be proven or merely asserted in order for this provision to obtain. Therefore, men could easily avail of this law to impregnate a girl or woman via rape, and then report a violation of the law in order to obtain $10,000. At least in Ireland, the law did not incentivize the sexual abuse of women.

There is further evidence that the Texas law is intended to punish people with female bodies and commit violence against them. Were the law truly intended to protect women and fetuses, the law would compel the impregnating party–that is, the provider of the sperm that fertilized the egg–to start providing monetary support for the pregnancy at the same point at which abortions become illegal. The law does not do that. The law, therefore, creates a society that seeks (1) to shame women either for acting on their own sexual agency, and (2) to shield men for the consequences of their sexual choices.

Ireland was able to look at its recent history of the horrific treatment and preventable deaths of pregnant women and girls and say “Enough.” I hope that the government of the United States can say “Enough” and act to make girls and women fully autonomous human beings under the law before we have our own X, Michelle Harte, and Savita Halappanavar.