A Brief History of the "Isolationist" Strawman

Brandan P. Buck is a PhD student in history and a Digital History Fellow at the Roy Rosenzweig Center for History and New Media at George Mason University. He is currently researching the domestic politics of U.S. foreign policy in the 20th Century. Brandan is also a veteran of the war in Afghanistan and former intelligence professional. 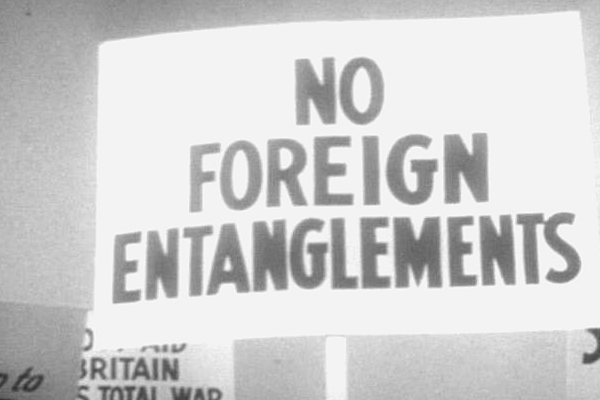 A pre-Pearl Harbor protest against U.S. involvement in the second world war. Still from the 1942 film "Prelude to War" in the Department of War's "Why We Fight" series

“Anyone who has opposed the policy of the moment has been labeled as an obstructionist and an isolationist.” This wry observation was made by “Mr. Republican,” Ohio Senator Robert A. Taft. Taft’s comments were delivered in reference to his opposition to the Marshall Plan, the post-

World War II recovery proposal which aimed to restore European economies, promote liberal commercial integration, and thwart communism’s spread in Europe. Taft led a body of conservative Republicans, who coupled with progressives to oppose this and other components of the Cold War. They believed that the suite of diplomatic policy changes would eliminate America’s economic advantage, benefit certain exporters, violate U.S. sovereignty, guarantee confrontation with the Soviet Union, and transform the United States from a republic into an empire. For their trouble, this transpartisan band of troublemakers were accused of advocating for appeasement and isolationism.

For over 80 years, the word “isolationist” has been used by the U.S. foreign policy establishment to narrow the range of acceptable public opinion on America’s role in the world. Popularized during America’s rise as an international superpower, the label has been used since 1945 to control dissent and limit the window of public discourse on foreign policy matters. As the United States enters another round of agonizing soul searching after another lost war, Americans should learn this word’s fraught political history.

“Isolationist” began its career as a strawman prior to American entry into World War II. The myth of an isolated America was created by foreign policy elites as a rhetorical foil for its own desire for U.S. dominance in the postwar world. “Isolationist” became a pejorative shorthand for narrowminded Americans who desired economic autarky and political neutrality from the outside world. The label was liberally applied to opponents of U.S. entry into World War II (left and right), none of whom would have used it themselves, and many of whom would have been considered internationalists a few years prior. Additionally, the burgeoning U.S. foreign policy establishment used the myth of isolationism to blame the rise fascism upon a benighted America which sought to politically disentangle itself from Europe after the Great War. “Isolationism” became the twin of another rhetorical hammer: appeasement. Together they would be used to shape a triumphant, “good war” narrative of World War II, one which would be mobilized to serve an American-dominated postwar order.

During the nascent Cold War, “isolationist” was again mobilized to burn off the vestiges of political opposition which stood athwart a bipartisan Cold War consensus. Despite America’s newfound status as an international superpower, trepidation remained, particularly on the fringes of the political spectrum. While leftwing opponents of the Cold War were primarily silenced via McCarthyism, rightwing dissidents were assailed with the “isolationist” label. In a mirror image of McCarthyite tactics, supporters of the Cold War paradigm accused dissenting Republicans of “playing into the hands of the communists” by opposing to the Marshall Plan, NATO, the draft, and a permanent national security state. Their reasoned (and prescient) opposition was labeled by Cold War hawks from both parties as a naïve and imprudent attempt to return America to an idyllic and isolated past...a past which never in fact existed. The isolationist label, coupled with the civil liberties abuses of McCarthyism helped to freeze relations with the Soviet Union and thereby deepen the Cold War.

In the aftermath of the Vietnam War, the label was again used to constrict the postmortem of that disastrous conflict and maintain the narratives which animated American foreign policy. During the malaise of the 1970s, foreign policy experts fretted that a wave of “neoisolationism” was going to undermine “the cherished lessons of the thirties, [and] the war years.” The specter of isolationism was used to bolster the position of hawks who still felt that the Vietnam War was justified. The result was a foreign policy establishment which was able to castigate the war on tactical or leadership grounds, while keeping the larger international project intact. This narrowing of disagreement took the wind out of the sails of a vibrant antiwar movement and paved the way for President Ronald Reagan’s reescalation of the Cold War.

The “I” word was again marshaled against opponents of the first Gulf War and those who decried President George H.W. Bush’s dreams of a “New World Order.” One of its primary targets was controversial paleoconservative Pat Buchanan. Buchanan and his cadre of antiwar right-wingers represented the largest conservative revolt against U.S. foreign policy in 40 years. As with their forebears, they were met with the dismissive label which stifled debate as America entered an era of global hegemony. Into the 1990s, the organs of the Cold War state would remain intact and repurposed towards buttressing an unrivaled American empire. This transition was made possible because to merely discuss a return to a status quo ante bellum, was to be an “isolationist.”

And again, 20 years after 9/11, “isolationism” has been used to obfuscate any substantive discussion of America’s role in the world. As with Vietnam and the early Cold War, debate around the calamitous bipartisan interventions into Afghanistan, Pakistan, Iraq, Somalia, Libya, and Syria are limited by the “isolationist” label. These interventions are often framed as well-meaning if misguided mistakes because their undergirding motivations are rarely challenged in public discourse. Opponents of these conflicts who make deeper critiques are labeled as retrograde “isolationists” who want to America to selfishly take its ball and go home. The label has become one of the few bipartisan institutions in Washington. Some of those tarred with the misnomer include progressive politicians, such as former House Representative Tulsi Gabbard and Senator Bernie Sanders. The label has also been applied to a growing body of libertarian leaning and populist Republicans who question Washington’s foreign policy orthodoxy and threaten decades of Republican uniformity on the issue. As in years prior, this country’s foreign policy establishment, and those who benefit from the status quo are attempting to the limit range of public debate in the wake of a series of extremely unpopular and costly wars. If Americans truly desire a new foreign policy, then it is time that they roundly reject the labels which seek to control their associations, silence their voices, and narrow their minds.