Amateurism, Sneaker Money, and the Forgotten Protest of the 1968 Games

Dr Harry Blutstein is a Fellow at the University of Melbourne in the School of Historical and Philosophical Studies. He is also a freelance journalist and writer. His last book on the 1968 Olympics is Games of Discontent (McGill-Queen’s University Press, 2021).  His next book, Cold War Olympics, describing the impact of the Cold War on the first three postwar Olympiads, will be published by McFarland next year. 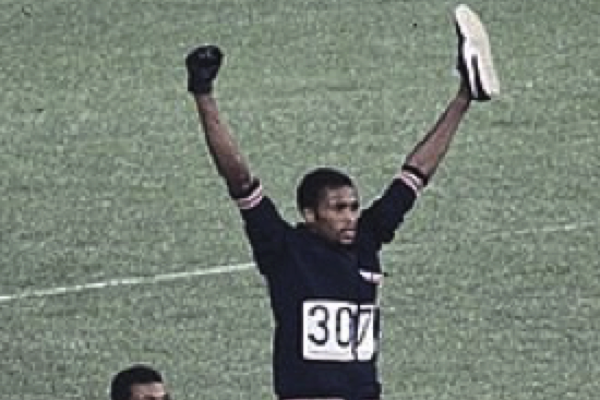 At the 1968 Olympics in Mexico City photographers captured the moment when Tommie Smith and John Carlos staged their protests. What most people don’t know was that there were not one but two protests: one at the start of the medal presentation ceremony, and the other at the end. The one that has become iconic is of the two athletes, barefoot, heads bowed, each man raising a single gloved fist in the air while the national anthem was played.  The second photograph was taken at the start of the ceremony. Standing on the podium, before bending down to receive their medals, each man raised a gloved fist, this time heads held high, and in their other hand was a single Puma shoe. This was the most audacious example of product placement at an Olympic Games up to then.

“They [the Puma shoes] were as important as the black glove and the black sock,” explained Smith afterwards. “I have them [sic] on the stand, because they helped me get there during the race and long before.” After the men had held up their shoes, they placed them next to where they stood, and then accepted their medals. The placement of the shoes was quite deliberate, according to Carlos. “If you look at the way the shoes were placed on the victory stand, Mr. Smith took his shoes and placed them behind him. I took my shoes [sic] and put it where everybody could clearly see the Puma logo.” They had purposely placed the shoes at right angles to each other so that the logo would be picked up regardless of where cameras were positioned.

During those Olympics, Puma and Adidas representatives plied athletes with thousands of dollars to wear their shoes, making medal winners into running and jumping billboards. Best of all for the shoe companies, they did not have to pay the television networks a cent of prime time exposure of their products.

In the past the IOC and athletic associations had enforced its amateur rules with Robespierrian rigor. Yet in Mexico City they did nothing.  Why?

There is no question that they knew about the inducements. Robert Lipsyte revealed in the New York Times that “American athletes had accepted money for exploiting athletic equipment they used in Olympic competition.”  Syndicated columnist Red Smith was horrified that the purity of amateur sport was ruined by Puma and Adidas whom he accused of having “poisoned the well,” with athletes receiving up to $7,000. How many athletes were involved? According to the Tribune de Lausanne, more than two hundred athletes had received money from either Puma or Adidas. The Los Angeles Times’s estimate was higher, reporting that “virtually every country in the Olympics are [sic] guilty of violations in the equipment scandal.”

After the Games, once newspapers exposed the extent of the payments, Horst Dassler, who represented Adidas, went to see Avery Brundage, IOC president and confessed that Adidas had paid athletes to wear its shoes. “Things happened that should not have happened, but we would have lost nearly the whole American team, and instead of 85% of the medal winners we would have had 30%.” explained Dassler. His point was that if he had not paid athletes who normally wore Adidas shoes they would have defected to Puma. With remarkable incuriousity, Brundage did not demand the names of athletes who accepted payments.

Then, on his way home after the Olympics, Dassler stopped off in New York where he caught up with Ollan Cassell, track and field administrator of the Amateur Athletic Union (AAU). Again, Horst blamed Puma for starting the bidding war and he wanted the AAU and other sports organizations to write new rules to put an end to it. “We’ll both go bankrupt if this continues,” he explained.  As a sign of his good faith, without being asked, he offered to give Cassell the names of all the American athletes that Adidas had paid: names, amounts, dates and even signed receipts. Cassell responded: “Horst, you can’t ask me to do this when there are other athletes in the world who also took your money, perhaps more than the American athletes.” He told Horst that he did not want to see his list.

Had Cassell accepted the list of names, then the AAU would have been forced to investigate and possibly suspend quite a few US medal winners. Not only would this be a disaster for American prestige, but the Olympic Games might not have survived a scandal of that magnitude, as bribes were also paid to athletes in other countries.

Having come clean with the IOC and AAU, Dassler had cleverly made them complicit, which provided him with confidence that no action would be taken against the shoe company.

During the 1980s, the IOC ran up the white flag, and athletes were able to endorse products provided that they did not cut across IOC sponsorship deals, which were helping the Olympic movement avoid bankruptcy.

Tommie Smith and John Carlos are remembered for their salute protest against racism, and their shoe protest was indelibly linked to racism. Amateur rules meant that athletes had to survive on a $2 per diem, and while they attended the Olympics they lost income from jobs at home. Both Smith and Carlos had young families, who would have teetered on the brink of penury if not for money slipped to them by Puma; most African American athletes were in the same position.