Walter D. Kamphoefner is Professor of History at Texas A&M University. He teaches in the field of immigration history and the U.S. Civil War. His forthcoming book, Germans in America: A Concise History (Rowman & Littlefield, 2021), surveys the sweep of the German American experience over more than 300 years. 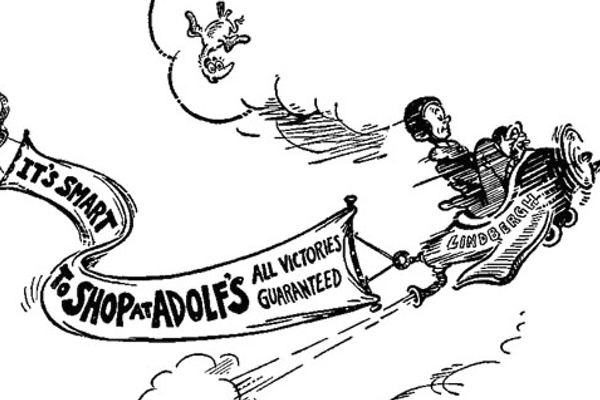 Ted Geisel, better known as Dr. Seuss, has been subject to distortions from both right and left.  Republicans who normally support the right of private businesses to do what they damn well please, even to the detriment of fellow citizens, as freezing Texans saw recently, are suddenly appalled at the decision of the Seuss publisher and heirs to withdraw six of his titles. These are not among Seuss’s greatest hits. I only recall one, just barely, from grade school sixty years ago.

For an accurate view of Seuss/Geisel's positions on race and ethnicity, see the anthology of his cartoons, Dr. Seuss Goes to War, with an introduction by Art Spiegelman. Incidentally, I bought the book at a special exhibit by the Houston Holocaust Museum. Seuss relentlessly combats isolationists (pp. 52-55), shows the "Father of Hate Radio" Coughlin on the line with Hitler (p. 51), depicts Lindbergh "Spreading the Lovely Goebbels Stuff" from a garbage truck (p. 41), and in one of the best, portrays auntie America First reading the story of Adolf the Wolf to a couple of freaked out kids: "and the Wolf chewed up the children and spit out their bones . . . But those were Foreign Children and it really didn't matter" (p. 45). Brings to mind the jacket slogan of a certain First Lady visiting the Mexican border.

Seuss combats racism and anti-Semitism stateside, especially in war industries (pp. 56-63), turning an old racist epithet on its head "There seems to be a white man in the woodpile" at a plant that posts "No Colored Labor Needed." His caricatures of the Japanese enemy are vicious, but hardly more so than his portrayals of Hitler, and Nazis in general.

But like everyone else, the liberal cartoonist errs occasionally. He depicts Japanese Americans as the "Honorable 5th Column" stocking up on TNT and "Waiting for the Signal From Home" (p. 65), but he's in "good" company there with Earl Warren (R-CA), who later as Chief Justice overturned legal segregation.

Despite cheap shots from the right and the left, I will continue to use Seuss/Geisel's cartoons in my teaching—and not only the anti-isolationist ones showing America sitting idly by when Britain and Russia were standing up to Hitler alone. Nobody gets through my junior immigration history course or even my freshman U.S. history survey without being posed the question of what Anne Frank would have become if her father had applied for admission to the U.S. (short answer: a concentration camp victim; he did apply in vain). I use Seuss cartoons to show that ignorance of European conditions was no excuse. I follow this up with the unjust internment of Japanese Americans, two-thirds of them U.S. citizens, cheered on by most Americans including Dr. Seuss.

Then I ask my students why it's necessary to include these "un-American" aspects. Rather than answering myself, I leave the final word to Betty Kanameishi. Her "love letter" to America, written behind barbed wire in her 1944 internment camp high school yearbook, closes with an admonition that could also be applied to Dr. Seuss: "I worship you in spite of the errors you have made. Yes, you have made errors and you have roamed on many wrong roads; but everyone makes mistakes. ... All I ask is that you do not make the same mistake twice." Then I tell students, that's my job--and yours as well. And it’s a lesson that Dr. Seuss himself learned in the course of his life.