Rally 'Round the Rune: Fascist Echoes of the CPAC Stage

by Mark Auslander and Jay Ball

Jay Ball, a playwright and theater historican, received his Ph.D. in Theater and Performance Studies at the University of Pittsburgh where his research focused on political drama in the former Czechoslovakia, Northern Ireland, and South Africa. He has taught at Carnegie Mellon University, the College of Charleston, and Central Washington University. He is currently pursuing a second doctorate in the Department of History at the University of Kentucky, on the public diplomacy of the Clinton Administration.

Mark Auslander  a Research Scholar in Anthropology at Brandeis, is a historical anthropologist specializing in political ritual, who works extensively on memory work and memorialization, as well as race and legacies of slavery in the United States. He is the author of The Accidental Slaveowner: Revisiting of Myth of Race and Finding an American Family (University of Georgia Press, 2011). 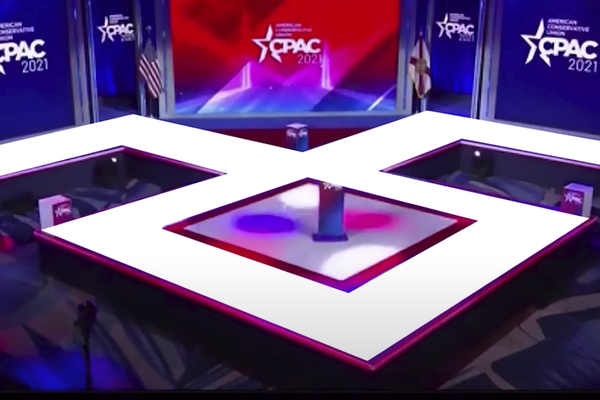 And the leaders in charge cry out, "Come, boys, come!"

—Confederate version of “The Battle Cry of Freedom”

Much has been made recently of the incorporation of the pre-Roman Odal or Othal rune motif, derived from the Elder Futhark writing system, infamously featured in the insignia of at least two Nazi SS units, into the stage design at the recent Conservative Action Political Conference (CPAC 2021) in Orlando, Florida. As numerous commentators have noted, this design, with the telltale serifs added by the SS, has widely circulated within neo-Nazi and white supremacist circles in recent decades, as a supposedly more palatable alternative to the better-known Nazi swastika itself.

Our particular interest is not solely the fact that the CPAC stage design draws upon Nazi and neo-Nazi imagery as such, but that this imagery was incorporated into a stage in particular. What is it about theatrical platforms that offers such powerful affordances for these kinds of highly charged symbolic acts, including those that draw on ancient occult imagery?

Although the designers may not have been consciously aware of the fact, their incorporation of mystical symbolism into the stage resonated with millennia-old themes in the history of theatrical platforms. From at least the time of ancient Athens, performance spaces have been intertwined with ritual action and political oratory. Within the Theatre of Dionysus, in the precincts dedicated to the god, masked dances and recitations were understood as sacred offerings that bound mortals and the visible world to the invisible world of divine beings. The adjacent Odeum of Pericles alternated between political speech-making, religious festival activity, and choreographed performances. These and related classical theatrical spaces were understood as dynamic thresholds between this world and the other world of the sacred, bearing profound affinities to altars and other spaces of spiritual veneration.

The sacrality of the stage is echoed in other performance traditions around the world, including in Japan, where kagura dances and sumo matches have been understood for centuries as purifying offerings to the divinities. The ancient Roman innovation of a fixed raised stage incorporated secular and sacred elements, including an altar and a tripod to Apollo, from which oracular pronouncements might be delivered.

The sacred and the theatrical continued to be conflated in medieval dramatic presentations. Our modern term “stage” is in fact derived from mobile platforms or pageant wagons in medieval mystery plays, which dramatized Christ’s stages on the cross, and other moments in the great sweep of scriptural history from Genesis to Doomsday. The portable “stage,” although not in itself a formally consecrated space of worship, was held to transport the lay audience into intimate encounters with the cosmic mysteries of the universe.’

Nazi propagandists were well aware of the intermingled history of theatrical and religious performance. The Nuremberg rallies, celebrating the union of the National Socialist party, the German state, and its resurgent military apparatus, consciously sought to evoke the grandeur of Gothic cathedrals, transporting participants into a near-mystical sense of oneness with the mythic German Volk. The famous opening shots of Leni Riefenstahl’s The Triumph of the Will provide aerial shots of the assembled on the ground, as the cruciform shadow of Adolf Hitler’s airplane passes over them, effectively blessing them with an apparition descending from the heavens. The great podium presented Hitler as a latter-day Messiah, through whose body and voice hundreds of thousands of followers, chorusing back in unison, were assembled into a vast organic instrument of the leader’s will.

The Odal/Othal rune’s ancient meanings emphasized property, lineage, and nobility. Those associations presumably informed the choice of the rune by the Nazi-era Race and Settlement Main Office, charged with upholding racial purity of the Nazi Schutzstaffel (SS), as well as the rune’s continuing popularity in postwar white supremacist tattoos and insignia, as a manifestation to the supposed pure lineage of whites.

We may never know the precise thinking behind the designers choices during the lead up to the American Conservative Union’s 2021 gathering to precisely replicate the rune in the stage. Yet it a reasonable inference that the Odal/Othal rune design, so well known in global white supremacist networks, was a non-oblique message to white nationalist supporters, near and far.

Having said that, one of the most intriguing aspects of the whole episode is the overt denial by the American Conservative Union leadership that the Opal/Othal rune was being referenced, in the face of overwhelming circumstantial evidence that the underlying symbolism informed the event space layout. Even the serif wings added by SS units to the rune were precisely reproduced in the stage design, after all. The current strategy on the right seems to be signal to the most committed far right racist base that the leadership is really with them, while maintaining plausible deniability with the broader electorate. The decision to incorporate the rune into the horizontal stage design, as opposed to, say, prominent vertical banners, would seem to be consistent with this overall strategy, of sending out coded messages to the base that may later be disavowed.

The Othal rune motif, after all, was not all that visible to those within the hall itself; it was more likely to circulate through television and as a social media image meme, signaling to the alt-right their inclusion within the broader conservative movement. It was in this sense analogous to Donald Trump’s now infamous message to the Proud Boys and their ilk, to “stand back and stand by,” indicating that white supremacists and militia members should be prepared to return to the combat arena when needed.

Beyond that, the particular design, of an encircling parallelogram with the two symmetrical extensions upon which orators enter the stage, can be read as concentrating the energy of the speakers (most notably former President Trump himself) and then projecting that energy out into the assembled crowd with the hotel ballroom and through the extended television audience. There may even have been a sense that the rune-modeled base on which the presenters spoke quite literally grounded them to the earth, to the very soil which they claim to be defending, a meaning that may have been linked to the ancient association of the rune with themes of ownership and noble lineage.

Theater in the Pandemic Era

We speculate that the incorporation of the rune was motivated, whether consciously or otherwise, in part by the current context of the pandemic, in which so much social interaction is mediated and remote. Millions long for a sense of liveness and intimate emotional connectedness. The emotionally potent symbol of the rune, upon which the speakers stood, may have helped activate the hoped-for sense of immediate and visceral engagement with the life of the extended national community, re-animating all that which seemed suspended during the lockdown.

During the COVID-19 era, the Republican Party and activists on the right have emphasized what they conceive as the fundamental right to gather, maskless, in crowds, deriving energy and strength from face-to-face encounters with one another. In this, they markedly contrast themselves with the Democratic Party’s emphasis on masks, social distancing, lockdown restrictions, and virtual, digitally-mediated encounters. The jagged angles of the CPAC stage, visibly projecting out into the hall, would seem to emphasize the aggressive celebration of co-mingling, a proud overcoming of risk in this “year of living dangerously.”

It hardly seems coincidental, in this light, that among the highest energy moments of this year’s CPAC convention was the pointed attack by Governor Kristi Noem (R-SD) on Dr. Anthony Fauci, as she stood upon this very stage. She denounced mask mandates and claimed, in staggering denial of the established facts, that South Dakota on her watch had successfully weathered the COVID-19 pandemic, ignoring thousands of documented deaths. Her punch line, “Dr. Fauci is wrong a lot,” elicited a standing ovation. It was as if she conjured up on this stage the ghosts of Shakespeare’s demonized villains, from the Jewish Shylock to the Puritan kllljoy Malvolio—who skulks off stage at the end of Twelfth Night, muttering “I'll be revenged on the whole pack of you.”

Blood and Soil, and the Heartland, and the right to gather unabashedly in person, were all juxtoposed against an ethnically-coded representative of the East Coast’s scientific elite (not Jewish per se, but close enough), who counsels caution and prudence. The moment might even have hearkened back to the ritual dramas of ancient Athens, in which the pharmakós or ceremonial scapegoat was assaulted, sacrificed, or exiled. From within the interior of the rune-shaped circle, the domain of sanctified purity and the righteous anger of the crowd, the alien other was expelled in the interest of collective expiation.

In ancient Norse lore, knowledge of esoteric runes was first granted to the god Odin as he hung upside down for nine days from the tree of life, Yggdrasil, moving through the domain of death into rebirth and eternal life. To be sure, the vast majority of the intended audience for CPAC are not neo-Pagan adherents conversant with deciphering ancient runes. Yet, many are presumably familiar through the Thor movies and other entries in the Marvel Cinematic Universe with elements of ancient Norse mythology. They are likely to derive a frisson, if only unconsciously, from the imagery of ancient power-concentrating symbols that open doorways to a mysterious alternate world. (We find ourselves thinking of the well-known imagery from the Stargate film and television series, in which esoteric inscriptions are lined up to open a doorway to a distant dimension.)  For a movement that is increasingly predicated on the millenarian faith that “the storm is coming,” the peculiar stage at CPAC 2021, freighted with a long history of ritual theater in general and the particular drama of a rune of power, may well have been apprehended as a portal to a violently transformative future, energized by the promise of collective purification.  For those inclined to read portents in their social media feed, the mysterious rune’s presence at the center of the conference hall may well have signaled a longed-for oracular prophecy: the storm is here.