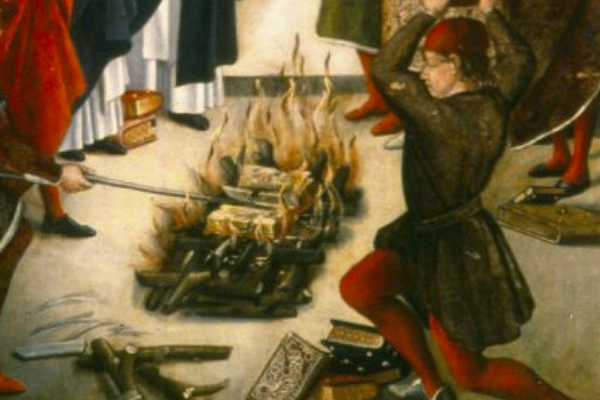 Louis IX ordered the burning of copies of the Talmud in Paris in 1242.

One of the older (and odder) books in my personal library is a volume titled Narrative of a Mission of Inquiry to the Jews from the Church of Scotland in 1839. As the title gives away, this book recounts a mission trip to Palestine “to see the real condition and character of God’s ancient people, and to observe whatever might contribute others in their cause”—namely, the cause of converting the Jews in Palestine and beyond to the one true faith, Scottish Presbyterianism. Contained therein is a day-by-day account of their travels from Scotland through Europe (France, Italy, Malta, Greece) and on to Egypt and then Palestine, before returning home on a route through modern-day Turkey and Eastern Europe.

Given that it was authored by a group of missionaries, this Narrative of a Mission of Inquiry offers an amusingly honest account of the travels of these missionaries. For example, they write, of a Jew with whom they spend the evening in Boulogne, “He had been long seeking the truth, and thought he was still doing so, but was not convinced that it lay with us.” However, being Scottish Presbyterians, they cannot fully commit to the humanity of the objects of their mission. Indeed, included in the book is an appendix titled, “Striking Similarity in the Main Features of Judaism and Popery, Proving That They Have One Author” (that author being, of course, Satan).

The very first similarity drawn between Catholicism and Judaism runs thus: “Popery Says: The Bible is not the only rule of faith. The Church is to determine what is believed. Judaism says: The Talmud and Cabbala are as good authorities as the Bible. Nay, the Talmud is wine, but the Scriptures, taken by themselves, are only water.” This strange prejudice against the Talmud finds expression when the missionaries are returning home and, in the city of Hamburg, encounter one Mr. Moritz, himself a Jew turned Christian missionary, who informs the Scotsmen that Russia is “by far the most important field for a Jewish mission. There are at least two millions of Jews in European Russia, not including Poland, and all are Talmudists except in Courland, where a little more light has broken in.”

Railing against the Talmud has a long history within Christian anti-Semitism. For much of its early history, the Church paid little attention to the development of Rabbinic Judaism, regarding Jews primarily as adherents to the Old Testament alone, as essentially unfinished Christians. When, in the late Medieval period, the tradition of Talmudic study became known to the Church, “prelates and polemicists reacted as if this unknown text were a kind of intellectual well poisoning,” writes James Carroll in Constantine’s Sword: The Church and the Jews: A History. “They seized on news of the Talmud as an explanation for Jewish recalcitrance, as if the work’s secrets equipped Jews with the power to withhold the assent that the friars’ preaching demanded.” Pope Gregory IX even described the Talmud as “the chief cause that holds the Jews obstinate in their perfidy.” These “Jewish secrets” provided not only the explanation for the “ongoing Jewish rejection of Christian claims but also of heresy among Christians themselves,” the Talmud and related texts somehow providing the source of division within the Church.

This notion has recurred throughout the course of history, the notion on the part of the powerful that some idea, Idea X, is the reason behind the current state of social disunity, and if we could simply rid our society of Idea X, then we could finally achieve peace everlasting, with all people happy and content in their respective social stations.

In the present-day United States, conservatives have labeled Critical Race Theory and the 1619 Project as the chief cause that holds certain populations in their perfidy—as our Idea X (Conservative concern over the power of Critical Race Theory has even extended to the United Kingdom and France). The legislature in my own home state of Arkansas has recently considered two bills on this very subject. The first, HB 1218, prohibits public schools from offering any activity that “Promotes division between, resentment of, or social justice for a: (A) Race; (B) Gender; (C) Political affiliation; (D) Social class; or (E) Particular class of people.” The second bill, HB 1231, aims to ban any usage of the 1619 Project in state classrooms and describes the project as “a racially divisive and revisionist account of history that threatens the integrity of the Union by denying the true principles on which it was founded.” Notice how these bills use the terms “division” and “resentment,” as if classroom instruction lies at the source of social division, and not the nature of society itself. Pope Gregory IX would certainly recognize the spirit underlying such legislation.

In 1242, King Louis IX (later St. Louis) of France ordered his soldiers to sack Jewish homes and synagogues and confiscate all known copies of the Talmud. The faculty at the University of Paris had declared the Talmud a work of heresy, dubbing it the chief reason that the Jews had refused to convert and arguing that destroying it would allow the Jews to recognize the fulfillment of the Old Testament in the person of Jesus Christ. And so the king’s men set fire to some 12,000 books dumped onto the pavement there in Paris. The fire lasted one and a half days. As James Carroll writes, “In the age to come, Jewish ignorance would be defined, ipso facto, as willful.”

Mass destruction of the Talmud did not, as had been hoped, facilitate mass conversion to Christianity. In fact, Christians continued to blame the Talmud for this state of affairs through several centuries and several waves of the Reformation, so that the words of Gregory IX found themselves reflected (ironically enough, given their attitudes toward “Popery”) in an 1839 mission to the Holy Land by a group of Scottish Presbyterians. And neither will the prohibition of Critical Race Theory or the 1619 Project in public schools facilitate mass acceptance of the traditional metanarrative of American history on the part of marginalized peoples. After all, Critical Race Theory and the 1619 Project are simply models designed to help all understand the difficulties large swaths of the American population continue to face in our allegedly post-racial era. These models are not the source of that marginalization, the source of those difficulties, no more than was the Talmud the source of any Jewish intransigence to the alleged truth of Christianity.

Conservatives can lay the blame now upon these models for all the divisions that face American society at present, but if history is any guide, they will not succeed in uniting the United States but, instead, will continue their campaigns of blame down through the centuries, making very little progress for their cause in the meantime. Eventually, Christian Europe decided the best way to kill Judaism was to kill Jews. So where do American conservatives see their own campaign of conversion ending up?