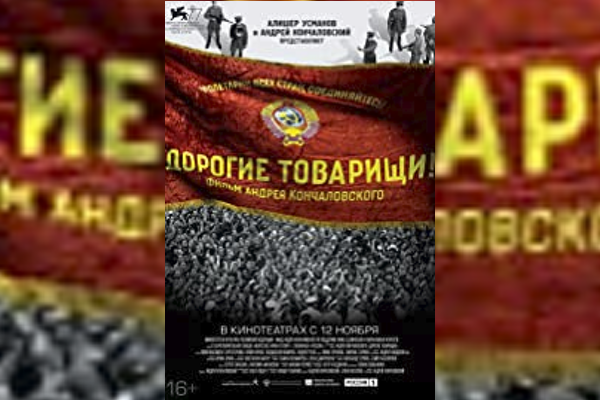 I once quoted Hilary Mantel, author of historical fiction about England’s Henry VIII and Thomas Cromwell, as follows: “To try to engage with the present without engaging with the past is to live like a dog or cat rather than a human being; it is to bob along on the waters of egotism, solipsism and ignorance. . . . Without a knowledge of history to give him [any person] a context for present events, he is at the mercy of every social misdiagnosis handed to him.”

These words occurred to me recently as I reflected on demonstrations and protests in Myanmar (against a military coup), Russia (against the arrest and incarceration of dissident Aleksei Navalny), and the United States (occupying the capitol building in protest against Trump’s election loss). Coincidentally, director Andrei Konchalovsky’s newest Russian film, “Dear Comrades!,” appeared on Hulu. It centers on an earlier (1962) Russian protest demonstration in the city of Novocherkassk, capital of the Don Cossacks.  In dispersing the demonstrators, 26 people were killed and 87 wounded (according to much later official figures).

In the 1970s in his Gulag Archipelago, famed Russian dissident Alexander Solzhenitsyn wrote, “We can say without exaggeration that this [the Novocherkassk protest and shootings] was a turning point in the modern history of Russia.”  It  “was the first time the people had spoken out in forty-one years . . .  unorganized, leaderless, unpremeditated, it was a cry from the soul of a people who could no longer live as they had lived.”

Mantel’s words, what past protests can tell us about present ones, and Russia also brought to mind some of my experiences in the Soviet Union between 1978 and 1991.  During those years I sometimes went there for a few summer weeks, usually taking students as part of academic trips. In 1978, I can remember a young Russian man several times walking with us from our hotel in Yalta to a downtown restaurant and asking us all sorts of questions, some historical. I was amazed at his thirst for knowledge, but realized how difficult it was for him to discover true facts in a society with censorship and the lack of a free press.

During the Gorbachev period (1985 to 1991), when I visited every year but one, it was wonderful to see how each year Soviet citizens gained more knowledge of their past--including about many of Stalin’s crimes. And what an insatiable thirst for history, without all of the previous Soviet falsehoods, there was!

About “Dear Comrades!” Konchalovsky stated, “I wanted to make a film about the generation of my parents, the one that fought in and survived World War II with a conviction that it was honorable to die ‘for Homeland, for Stalin” and an unconditional trust in the goals of communism: to create a new society through efforts of millions of people. I wanted to reconstruct with the utmost accuracy the events that really happened, and an era in which history revealed the unbridgeable gap between communist ideals and the tragic reality of facts. This film is a tribute to the purity of that generation, its sacrifices, and the tragedy it experienced seeing its myths collapse and its ideals betrayed.”

And indeed, unlike so many films set in past times, Konchalovsky’s accurately reflects what really happened--and why Solzhenitsyn thought the Novocherkassk demonstration was so important.

The main cause of the protest, which began on 1 June, 1962, was a nationwide price increase in meat and dairy products that went into effect that same day. The increase came soon after the local Budenny Electric Locomotive Factory had raised workers’ norms, thus decreasing their pay unless they began producing much more. Fueled by these changes, protests swelled. On 2 June almost ten thousand protesters, led by factory workers, marched to Lenin Square and local Communist Party headquarters, with some entering the building and tearing down red flags and even a portrait of Lenin. Meanwhile, Red Army and internal security troops, as well as KGB agents, had been summoned to deal with the unruly crowd. After warning shots fired in the air failed to disperse demonstrators, rifle shots began hitting individuals. Among the dead, were two women and one schoolboy, the rest being mostly young men.

The film accurately portrays the main occurrences of these early June days: the anger of the workers; the march, past tanks, to Lenin Square; a balcony speech by a regional Communist Party official that was greeted with jeers and stone throwing from the crowd;  meetings with high Party officials (but not Khrushchev) who were sent from Moscow; people struck by bullets and falling dead or wounded; and Communist officials taking various steps--like preventing people from leaving the city, ordering blood cleaned from pavement, and burying victims in unmarked graves outside city limits.

At the center of these events is the film’s central character Lyuda Syomina--the first-rate actress Julia Vysotskaya, who is also the wife of director  Konchalovsky.  She heads the Production center of the Novocherkassk City Committee. Early in the film, we see her getting out of a bed she has been sharing with her married boss and then going to purchase some food.  Later we see that that she lives in an apartment with her elderly father and eighteen-year-old daughter, Svetka. Later still we learn that she had been an army nurse in World War II, to Russians the “Great Patriotic War,” a war fought primarily against Nazi Germany and one in which more than fifty times as many Soviet citizens lost their lives as compared to U. S. citizens.  It was during this war that she had Svetka, the father being her “true love”--though he was someone else’s husband. Like roughly 800,000 Soviet citizens--he died in the largest tank battle in history, the Battle of Kursk.

Although a major theme of the film is ideological belief--right after relating the story of Svetka’s birth, Lyuda asks (see script), “What am I supposed to believe in, if not communism?”--Konchalovsky presents not only the prevalence of belief in the communist system, but also accurately reflects many of the realities of Soviet life.  And not only in 1962, two years before Khrushchev was ousted from power, but also in earlier years.

For example, Lyuda’s father discusses with her his past with the Don Cossacks--in the Russian Civil War, they fought against the communists until defeat in 1920.  When Lyuda tells him that to understand that conflict in the Don area, with its capital being Novocherkassk, he should read Soviet novelist Mikhail Sholokhov (author of The Quiet Don), he responds that if  Sholokhov “had written the truth, nobody would have known he ever existed. They'd send him away somewhere, or even execute along with the others.”

Shortly after the Civil War, famine occurred in the Don area and some other southern Soviet areas. Lyuda’s dad reads her a letter (written in 1922 or 1923) from his niece: “People [Soviet authorities] came in, took our last corn, fined us. Mom says we'll die of hunger, since this isn't the first time this has happened.” The eventual famine deaths in the Don area from 1921 to 1923 were accompanied by millions more throughout the country.

Of the many innocent Soviet people who lost their lives because of Stalin’s oppression from 1928 to 1953 (millions and millions of them, not even counting WWII deaths), not much is said in the film. But in an argument with her mother, daughter Svetka does say, “He [Stalin] executed so many innocent people!” Later, after Svetka continues to insist that Khrushchev in a famous 1956 speech told the truth about Stalin’s crimes, Lyuda becomes increasingly angry and slaps her daughter.

Not too much is said about World War II, but we should note that because of the high number of Soviet male deaths in WWII, Lyuda’s single status back in 1962 was more common for women in Russia than in the USA. Among those in the age group (40-49) that did most of the fighting in the war, 1959 census data indicates that there were only 62 men for every 100 women.

Other indications of Soviet life in 1962, and throughout much of the Soviet period, abound throughout the film: the high percentage of adult women who work outside the home, as well as do most of the shopping and house work, made more difficult by less household appliances than possessed by U.S. women; shortages of goods and waiting in lines to buy food and other goods (when available); crowded living arrangements; the prominence of blat [pull or influence] that enabled Party people and/or officials like Lyuda to avoid grocery lines and obtain better goods than the average Soviet citizen; and the high rate of smoking (Lyuda’s father “smokes like crazy”) and drinking (a KGB official who drives Lyuda out of town keeps a bottle of alcohol in his glove compartment, and they both take swigs).

They are going in search of hidden grave sites, where Lyuda fears her daughter may be buried.  Along the way, Lyuda blurts out that KGB snipers shot into the Novocherkassk protesters, which may have been true. But just before she shouts out “It was you, sons of bitches, you shot at the people from the roofs!” the two of them sing a patriotic song, and not long afterward Lyuda says, “Wish Stalin could come back. We can't do it without him.” As incredible as such a remark may seem to Western readers mindful of Stalin’s many crimes, we must remain mindful of how limited Soviet knowledge was in 1962 of their true history. (For more on Stalin’s popularity, even today in Russia, thanks in part to Putin, see here.)

The relevance of “Dear Comrades!” for today’s film audiences, both inside and outside Russia, turns out to be not so much any lessons it can teach us about the success or failure of protest demonstrations. They vary too much in time, place, and intention. Consider, for example just the three mentioned near the beginning of this essay in Myanmar, Russia, and the USA. If we add just those of Gandhi, Martin Luther King (MLK), the Arab Spring of a decade ago, and the Belarus protests of 2020-21, we get an even better idea of the complexity and variance of large protest movements. Effective large-scale Gandhian and MLK protests, for example, would have never been successful in Stalinist Russia or Nazi Germany, where they were never even attempted.

No, the chief relevance of the film today is what it tells us regarding truth and ideological thinking. Simply put, the latter, whether communism or some right-wing ideology, is an impediment to attaining truth (see here and here for more on truth and ideology). And as one of the greatest protest leaders in history, Gandhi, taught us truth-seeking should come before protest--“our business was the search for and insistence on truth.” “Dear Comrades!” great value is that it helps us experience, to  understand and to feel, how tragic life can be when truth-seeking is undervalued and falsehoods reign. Coming after four years of a U. S. presidency flooded with falsehoods, such a lesson seems important indeed.