Cara Finnegan is a professor of communication and photography historian at the University of Illinois at Urbana-Champaign. She is the author of Photographic Presidents: Making History from Daguerreotype to Digital, which will be published in April. 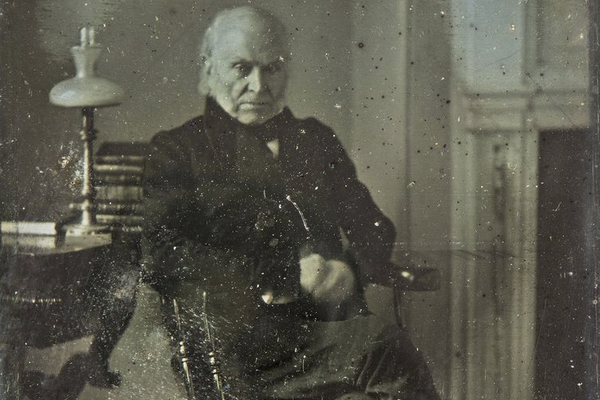 Inauguration day featured a number of dramatic moments: Kamala Harris’s swearing-in as the first woman and first Black and South Asian vice president, Amanda Gorman’s thrilling inaugural poem, and Joe Biden’s inaugural address, which both called for unity and called out white supremacy. Less dramatic but equally symbolic performances took place in the Capitol Rotunda, as members of Congress presented gifts to the new president and vice president in a ceremony that reclaimed that space just two weeks after the Capitol insurrection. Among those gifts were framed photographs of Biden and Harris being sworn in just one hour before. “Wow, that was quick!” Biden exclaimed as he bent over to study his picture. House Minority Leader Kevin McCarthy, who presented the photos, quipped, “Modern technology, right?”

The exchange went largely unnoticed during an admittedly symbol-heavy day, yet that brief moment hinted at the long history of the relationship between presidents and photography. Biden’s one-hour photo has echoes in a 19th century act that took place just down the road from the Capitol, at the other end of the national mall. In 1848, the cornerstone of the Washington Monument was laid in a public ceremony attended by luminaries such as President James Polk, Dolley Madison, Eliza Hamilton, and a young congressman from Illinois named Abraham Lincoln. Dozens of items were deposited into the cornerstone as a kind of time capsule, including two examples of the new medium of photography. As a Washington, DC newspaper reported, those items included “Daguerreotype likenesses” of portraits of Washington and his wife, “with a description of the Daguerreotype process by John S. Grubb, Alexandria, Va.” Apparently this “modern technology” was thought to be so important as to be literally entombed in a monument to the nation’s first president, even though he had died forty years before photography was even invented.

Why photograph a Washington portrait and enshrine it inside his monument? The intertwined history of presidents and photography suggests that the better question to ask is, why wouldn’t you?

The Washington Monument's daguerreotypes show that photography and the presidency were bound up with one another from the start. And Biden’s one-hour photo reminds us that they remain so today. But while most of us recognize that presidents need photography to bolster their political image, the opposite is also true: photography has always needed presidents.

The daguerreotype was the first practice of photography to become popular in the United States, largely because the French government offered it freely to Americans. Instructions for making daguerreotypes first appeared on this side of the Atlantic in September 1839, and with them came self-styled experts to explain the new process. One of those emissaries, François Gouraud, performed dramatic demonstrations that left observers struggling to find words to explain the wondrous results. A New York paper wrote of Gouraud’s daguerreotype collection, “it is utterly beyond the power of language to describe their perfections, and equally impossible for one who has not seen them to derive from language a just conception of the wonderful effects produced.” According to that same writer, Gouraud announced that he would present the daguerreotype he had made “to the President of the United States, as the first perfect specimen of the Daguerreotype produced in this country.” While Gouraud’s claim that his daguerreotype was the first was not true, his interest in sharing the image with the president highlighted the medium’s public value. To present a daguerreotype to the President of the United States would show that the new art was so valuable as to be worthy of attention from the country’s elites. Photography needed presidents to build its importance as a public art.

Soon it was not enough to offer gifts to presidents. One needed to photograph the presidents themselves. Throughout the 1840s, daguerreotypists sought out opportunities to photograph the nation’s leaders. Justus Moore and Captain Ward took up temporary residence in Washington, DC in early 1841, setting up a space in the U.S. Capitol where they photographed President William Henry Harrison, members of Congress, and other political figures. (The daguerreotype of Harrison is lost to history but likely outlived the president himself, who died just 31 days after his inauguration.) The oldest extant photograph of a president is a daguerreotype of John Quincy Adams made in 1843 by Philip Haas. (Discovered only a few years ago in the possession of the family of Adams’s friend Horace Everett, it is now owned by the Smithsonian.) Although Adams sat for daguerreotypes dozens of times before his death in 1848, he complained in his diary about falling asleep during long exposure times and felt that the resulting images made him look “hideous.” Despite his frustrations, Adams understood the value of portraits, particularly of those like himself so closely tied to the nation’s founding. Photography appeared precisely at the moment when the generation of the revolution and early republic was dying out, and photographers sought to capture their faces before they died. Daguerreotypists were so obsessed with photographing Andrew Jackson before his death in 1845 that they staged the equivalent of a months-long (and eventually successful) stakeout of his home in Tennessee. Photography needed presidents to demonstrate its value as a record of history.

Returning now to the Washington Monument’s daguerreotypes, it’s easier to see why they are there. Washington didn’t necessarily need photography, but photography needed Washington: to highlight its importance as a public art, its value as a record of history, and its capacity to make the past present. Washington’s daguerreotypes and Biden’s one-hour photo serve as compelling bookends to the intertwined history of an institution and medium that continue to shape one another.