The Free Press and Democracy in a "Murder the Media" Age

Wendy Melillo is an Associate Professor of Journalism in the School of Communication at American University. 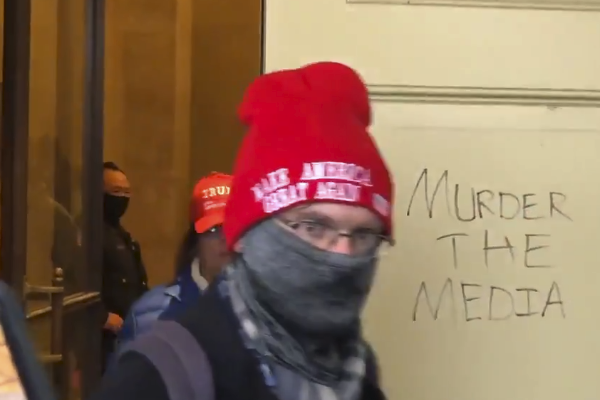 The ugly message “Murder the media,” etched into a door of the Capitol by an angry mob of violent Trump supporters January 6, reflects the deep lack of trust in American journalism stoked by a demagogic President and his enablers over the last five years.

Two new media efforts offer contrasting visions about how best to solve the problem. Should journalists place objectivity at the core of their work by only reciting facts about what happened and how things work? Or should journalism more purposely foster a healthy democracy?

In the other camp, veteran journalists Charlie Sennott and Steven Waldman have dedicated their new enterprise – Report for America – to “saving journalism” by emphasizing local news and issues. Their take is that the collapse in local journalism, underscored by the 2,100 newspapers that have closed since 2004 and the 200 counties in America with no newspaper at all, is a real threat to democracy.

History tells us that enticing young journalists to rebuild journalism at the grass-roots level with the goal of strengthening democracy is the key to combatting the conspiracy driven falsehoods that have permeated American media in the Trump era and deeply harmed the country’s democratic institutions. The kind of journalism that helped spark the birth of the nation, abolish slavery, create investigative journalism, eradicate McCarthyism, publish the Pentagon Papers, uncover Watergate and emphasize the need for civil rights was based on facts and driven by a moral purpose to create a stronger, fairer and freer society.

It’s hard to imagine an American Revolution taking place without Thomas Paine’s 1776 pamphlet Common Sense, which stood against monarchy in favor of creating a new social order based on the power of the people’s voice. “The sun never shined on a cause of greater worth,” Paine wrote. “Tis not the concern of a day, a year, or an age; posterity are virtually involved in the contest, and will be affected even to the end of time.”

The editors of Freedom’s Journal, the first black-owned newspaper in the U.S., knew that to counter racist and disparaging portrayals of black people in white owned and operated newspapers, they needed to fill their pages with stories about the intellectual and cultural achievements of their race. “We wish to plead our own cause,” wrote founding editors Samuel Cornish and John Russwurm in the first issue on March 16, 1827. “Too long have others spoken for us. Too long has the publick been deceived by misrepresentations in things which concern us deeply.”

Between the Civil War and the turn of the 20th Century, muckrakers – some of the brightest literary minds at the time – took to the pages of magazines like The Atlantic, North American Review, The Nation and Harper’s – to investigate corruption and greed. Charles Francis Adams, son of President John Quincy Adams, and grandson of John Adams, revealed corrupt corporate tactics in the North American Review, the oldest literary magazine in the U.S., founded in 1815. “The system of corporate life, and corporate power, as applied to industrial development, is yet in its infancy,” Adams wrote in his July 1869 article “A Chapter of Erie.” “It tends always to development – always to consolidation, – it is ever grasping new powers, or insidiously exercising covert influence.”

When U.S. Senator Joseph McCarthy of Wisconsin started investigations to uncover alleged Communist infiltration in America during the 1950s, it was broadcast journalist Edward R. Murrow’s March 1954 television editorial on the CBS program See It Now which helped stop the witch hunt. After accusing McCarthy of persecuting people without facts, Murrow said, “We must not confuse dissent with disloyalty. We must remember always that accusation is not proof and that conviction depends upon evidence and due process of law.”

Journalists who faced threats of violence as they covered the Civil Rights Movement helped expose the cruelties black people faced in the South. On assignment for a story about the attempted enrollment of a black student at the University of Mississippi in 1962, CBS correspondent Dan Rather reported seeing a motel sign that said, “No dogs, Niggers or reporters allowed.” When broadcast reporters turned on the camera lights to film the protests, bullets were fired to knock out the lights.

Publication of the Pentagon Papers revealed what really happened during the Vietnam War. Watergate demonstrated the abuse of power happening in the highest political office in the land. Would Watergate have ended with President Richard Nixon’s resignation if Republicans controlled the Senate at the time? It’s a good question, especially in light of  Republican Senate inaction during President Trump’s impeachment trial, and failure so far to hold Trump accountable for the attack on the Capitol. But that shouldn’t belittle the relentless pursuit of the truth by Washington Post journalists Bob Woodward and Carl Bernstein among others.

To be sure, journalists had their low moments. Working against a woman’s right to vote and failing to stand up to the vitriolic anti-Semitism of Father Charles Coughlin, the “Radio Priest,” come to mind. But we also know that journalism is at its best when it puts principle before profit. Acting like stenographers who only dictate the facts according to an objective standard will not be enough to help the country withstand the attacks on democratic institutions that Americans have witnessed over the last four years.

President Trump incited a mob of his supporters to violently storm the Capitol to stop Congressional certification of President-elect Joseph Biden’s victory. He used lies and propaganda to convince that mob not to trust what government officials, judges and respected journalists working for credible media outlets reported about the lack of evidence to support his claim of voter fraud. The disturbing images of the angry mob beating a Capitol Hill police officer to death, destroying government and media property alike, and threatening violence against legislators, their staff and journalists will not be easily forgotten.

Restoring trust in journalism is a necessary step to rebuilding our fractured democracy. It requires a deep understanding of the historical role the media has played in fostering life, liberty and the pursuit of happiness in America. Demagogues will always exist. When they gain power, a free press is one of the first institutions to come under attack, as happened with Trump.

To build a more perfect union, journalists can’t solely be objective. They must take a side by standing for democracy and against authoritarianism.