Where Does the Democratic Party Stand on War, Peace, and International Relations? 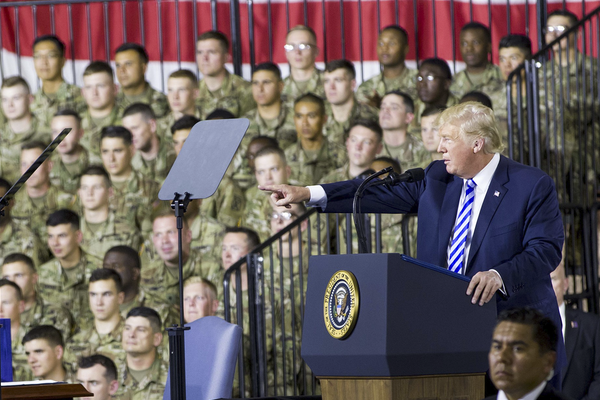 After nearly four years of the Trump administration, U.S. voters have a pretty good idea of the policies that the President and his Republican allies champion when it comes to America’s dealings with other nations.  These policies include massive increases in military spending, lengthy wars abroad, threats of nuclear war, withdrawal from climate and nuclear disarmament treaties, a crackdown on refugees, and abandonment of international institutions.

But what about the Democrats?  Do they, as some have charged, simply mirror the Republicans when it comes to America’s engagement with the world?  The official Democratic Party platform, adopted this August at the Democratic national convention, provides a useful answer to this question.

The foreign affairs section of the platform opens with a sharp rebuttal to Trump’s belligerent, nationalist approach.  Challenging militarism, it pledges to “use force only when necessary, always as a last resort, and with the informed consent of the American people.” It also promises to draw upon international partnerships and institutions to “meet common challenges that no country can face on its own.”

The platform’s discussion of U.S. military policy is particularly striking.  “We need to bring our forever wars to a responsible end,” the document states.  “Our military engagements, which have spanned from West Africa to Southeast Asia, have cost more than $5 trillion and claimed more than half a million lives. Our war in Afghanistan is the longest war in American history.”  Thus, “it’s time to bring nearly two decades of unceasing conflict to an end.”

Accordingly, the platform calls for a peace settlement in Afghanistan, termination of U.S. support for the Saudi-led war in Yemen (a war that “is responsible for the world’s worst humanitarian crisis”), and for applying the lessons learned from these disastrous conflicts.  This means, among other things, that “we will work with Congress to repeal decades-old authorizations for the use of military force and replace them with a narrow and specific framework that will ensure we can protect Americans from terrorist threats while ending the forever wars.”  The platform adds: “Rather than occupy countries and overthrow regimes to prevent terrorist attacks, Democrats will prioritize more effective and less costly diplomatic, intelligence, and law enforcement tools.”

In line with this new approach, the platform calls for cutting the Trump administration’s bloated military budget—what it calls, in typical Washington-speak, “restoring stability, predictability, and fiscal discipline in defense spending.”  In justification, the platform notes that “we spend 13 times more on the military than we do on diplomacy. We spend five times more in Afghanistan each year than we do on global public health and preventing the next pandemic. We can maintain a strong defense and protect our safety and security for less.”

The platform also pledges that Democrats will initiate other reforms in the U.S. military. These include efforts to halt “the Trump administration’s politicization of the armed forces,” root out sexual assault within their ranks, and safeguard “the independence of the military justice system—not pardon war criminals.”

Promising to “revitalize American diplomacy,” the platform argues that, “rather than militarize our foreign policy,” the Democrats would make diplomacy “our tool of first resort.”  Under a Democratic administration, the U.S. government would rejoin the World Health Organization, the UN Human Rights Council, and the UN Population Fund and seek to modernize international institutions.  Championing foreign assistance and development programs, the platform backs U.S. “investments in the prevention and alleviation of poverty, hunger, disease, and conflict,” and “the empowerment of vulnerable and marginalized populations.”  It also promises that “Democrats will lead international efforts to help developing countries withstand and recover from debt crises causes by the COVID-19 pandemic.”

Indeed, the Democratic platform sharply rejects the narrow nationalist approach of the Trump administration.  It contains strong commitments to acting cooperatively with other nations to ensure global health (for example, by restoring the U.S. role as the leading funder and technical partner of the WHO), battle climate change (by rejoining the Paris Climate Agreement and developing more ambitious global goals to reduce greenhouse gas pollution), utilize technology for the public good (by maintaining an open internet), and expand the admission of refugees.  In yet another attempt to respect the rights of other nations, the platform promises to move the U.S. government’s “relationships in the Middle East away from military intervention” and to end the cruel policies of the Trump administration toward Cuba and Venezuela.

In line with this decreased emphasis on military might and increased emphasis upon international cooperation, the platform states that Democrats support the “elimination” of chemical, biological, and nuclear weapons.  They favor “reducing our overreliance and excessive expenditure on nuclear weapons” and declare that “the Trump administration’s proposal to build new nuclear weapons is unnecessary, wasteful, and indefensible.”  Furthermore, “Democrats commit to strengthening” the nuclear Nonproliferation Treaty, “maintaining the moratorium on explosive nuclear weapons testing, pushing for the ratification of the UN Arms Trade Treaty and Comprehensive Test Ban Treaty, and extending New START.”  Moreover, they would “work with Russia” to “negotiate [nuclear] arms control agreements . . . and move the world back from the nuclear precipice.”

Admittedly, the 2020 Democratic platform also contains occasional flag-waving rhetoric and a number of positions that are bound to irk at least some critics of Trump’s policies.  Also, of course, a party platform is a statement of policy preferences—not a guarantee of their implementation.

Even so, when it comes to war, peace, and international relations, the Democratic Party has outlined a program significantly different from that of its Republican counterpart.  In this November’s elections, American voters will have a clear choice as to what kind of role they want their country to play in the world.