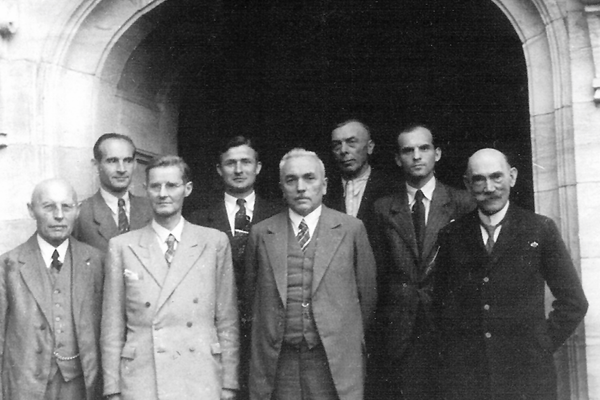 Friedrich Kellner, front center, at the Laubach courthouse where he served as an administrator while secretly keeping a diary observing the rise of support for genocide.

According to my German grandfather, hardly anyone in his small town in central Germany was surprised or disturbed when their Jewish neighbors were forcibly taken from their homes. Years of unrelenting anti-Semitism, fomented by the Nazi propaganda ministry, made the roundup and imprisonment of Jews seem a justified consequence of their alleged crimes.

"Five years ago, everybody would have thought it impossible," gushed the proud author of a 1942 article in the Berliner Boersen newspaper about how quickly Europe had been "cleansed" of the "parasitic presence" of Jews.

"The Jews Are Our Misfortune," claimed the boldfaced headlines at the newsstands. Evil-looking men with hooked noses and wearing skull caps stared ominously from kiosk and wall posters; Jews were villains in movies and in the weekly newsreels. A battalion of trained Reich speakers, well-versed in a litany of Jewish misdeeds, traveled the countryside to attest first-hand to the menace. Illustrated magazines and books added to the social indoctrination.

But mostly, there was Joseph Goebbels' and Adolf Hitler's favorite medium, the radio, which brought them into the nation's living rooms where a dramatic whisper could provide the illusion of intimacy, and an angry voice, raised above a background of martial music, could arouse millions to war -- and to genocide.

"The radio blares out its special reports with fanfares and sounds of marching! Theater, nothing but theater. The people must always be aroused," wrote my grandfather scornfully in his diary. "Now with winter upon us and people bound to their warm homes, the propaganda ministry renews its racist broadcasts against the Jews. 'The Jewish enemy has to be eradicated,' they tell us. The Nazis are responsible for all the atrocities and then conjure up a scapegoat to keep from being called to account for their deeds. A vast number of my fellow citizens willingly buy into the deception."

Kellner was at a loss to understand why the German people could turn so easily against the Jews. The smallest segment of their population had brought great honor to their country with accomplishments in every field, including Nobel prizes in physics, literature, chemistry, and medicine.

"If the Jews, who have contributed real achievements over the centuries to our nation's development, can be made a people without rights, that is an act unworthy of a cultured nation," he declared. "The curse of this evil deed will indelibly rest on the entire German people."

And in response to the news clipping from the Berliner Boersen, he wrote, "This so-called 'cleansing Europe of Jews' will remain a dark chapter in the history of mankind. If we are so far gone we simply eliminate people, then we are irretrievably lost. Today it is the Jews; tomorrow it will be another weak tribe that is exterminated."

As an organizer for the Social Democratic Party, Kellner had campaigned against Adolf Hitler's National Socialist Party throughout the entire time of the ill-fated Weimar Republic. When Hitler came to power, Kellner began a diary (that ultimately would reach 900 pages) to record Nazi crimes and the German people's overwhelming approval of the murderous agenda. His empathy for the Jewish people and his outspokenness against the regime and its control of the nation's media marked him as "a bad influence" and he was placed under surveillance by the Gestapo. His position as a justice inspector in the regional court gave him some protection from arbitrary arrest.

A major worry for Kellner was that Adolf Hitler's benighted racial theories would not die with the man but be used by totalitarian-minded fascists in the future. Greedy for power and intolerant of dissent, they would always plague civilization with their "abysmal meanness and pathetic cowardliness."

He was right to be concerned.

The unaccountable media in the Third Reich, with its ubiquitous and often malevolent fake news, was entirely one way and favored with coerced "Likes" from a compliant people. All voices were silenced except those in concert with an ideology that dared not allow competition. Death by the guillotine's heavy blade awaited anyone caught listening to a foreign broadcast or reading a leaflet dropped from an Allied airplane.

The virulent cacophony and clash of opinions that signify today's social media may indeed be a continuation of more than two centuries of robust democratic politics and vastly preferred.

But the obscene echoes of the poisonous anti-Semitism that spiked the dreams of Adolf Hitler, Joseph Goebbels and Heinrich Himmler is a cautionary tale for a twittering world rife with anonymous bullies and violent extremists on both sides of the political spectrum who, regardless their diametrically opposed views, too often rely on the same indiscriminate destruction to make their points. Violence and intolerance are ultimately self-defeating and must not be an expression of honorable principles.

"Why only hate?" asked Friedrich Kellner. "Where does love remain -- or at least a little decency toward other people? We think we can behave against everyone in the exact same rabid way we did against the Jews: to smash, crush--and even exterminate."

"Our era is just awful!" wrote the German justice inspector. What might he say of ours? 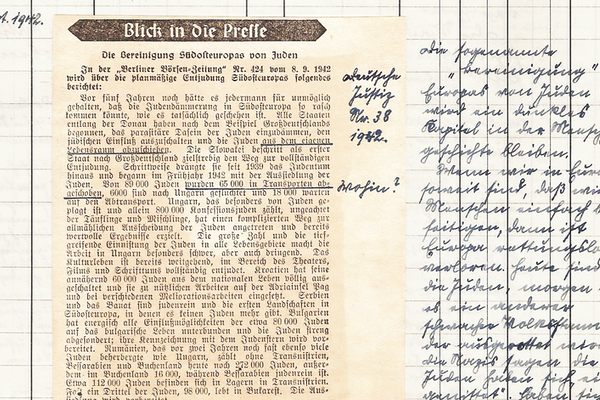 A Look at the Press

The following report comes from the Berliner Börsen-Zeitung, No. 424, September 8, 1942, about the scheduled purging of Jews in Southeast Europe:

Five years ago everybody would have thought it impossible the end of the Jews in Southeast Europe could come about as quickly as it in fact happened. All states along the Danube have, after the example of Greater Germany, begun to limit the parasitic presence of Jews, to eliminate Jewish influence and to push Jews out of their own sphere of living.

Slovakia followed the example of Greater Germany with the goal to completely free itself of Jews. Since 1939 it systematically encouraged Jews to leave, and in the spring of 1942 it started with the expulsion of Jews. Of 89,000 Jews, 65,000 were moved out in transports, 6,000 have fled to Hungary and 18,000 are awaiting transportation.

Hungary, which is especially plagued by Jews, and counts 800,000 Jews, not considering those who have converted and Jews of mixed parentage, has embarked on a complicated path for gradual expulsion of Jews and has already attained worthwhile results. The large number and the extensive settlement of Jews in all areas of life make this work especially difficult in Hungary but also urgent. The cultural life as far as theater, movies, and writing are concerned is already completely purged of Jews.

Croatia has completely eliminated its close to 60,000 Jews from the national life and has utilized them for necessary labor on the Adriatic island of Tag.

Serbia and the Banat are free of Jews and they are the first areas in Southeast Europe where there are no more Jews at all.

Bulgaria has energetically prevented all possibilities of influence on Bulgarian life by about 80,000 Jews and has separated them strictly; their marking with a Jewish star is in progress.

Two years ago Romania had almost as many Jews as Hungary and still counts, apart from Transnistria, Bessarabia and Buchenland, 272,000 Jews; in Buchenland 16,000, while Bessarabia is free of Jews. About 112,000 Jews are in camps in Transnistria. Almost a third of the Jews, 98,000, are living in Bucharest. Their expulsion is being prepared.

This concise overview shows the significant progress: in one year there will be no more Jews in Slovakia, Croatia, Serbia, and Romania. The dangerous internal enemy is being methodically eliminated.

To where [are they being transported]? This so-called "cleansing" Europe of Jews will remain a dark chapter in the history of mankind. If we in Europe are so far gone we simply eliminate people, then Europe is irretrievably lost. Today it is the Jews; tomorrow it will be another weak tribe that is exterminated. The Nazis say the Jews have "settled in." Have not Germans also "settled in" everywhere in the whole world? And even now, are not the Germans in the process of creating living space in the East in order "to settle in" there?