Can Biden Win the Presidency from His Basement?

Quentin Janel is an Associate Researcher at the Public Opinion and Political Communication Laboratory at the Université du Québec à Montréal. His recent doctoral thesis deals with the birth of a new campaign communication culture in American Presidential elections between 1824 and 1896. 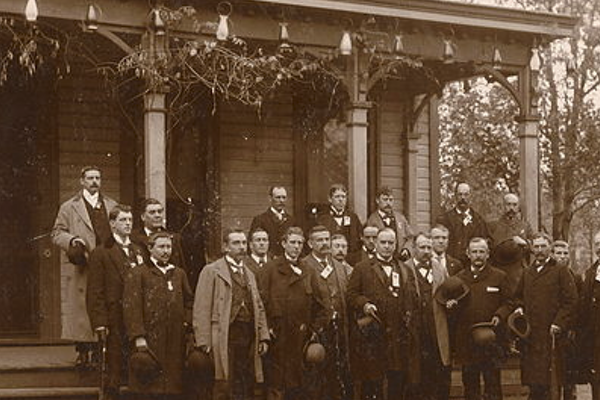 Since gaining a decisive lead in the Democratic primaries, Joe Biden has faced a situation unique in contemporary politics: while preparations for the upcoming general campaign are underway, the candidate himself is locked up at home. Respecting the COVID-19 guidelines, he held several online interventions, virtual roundtables and advertisements, conducting what some already call a "basement campaign". Likewise, when Biden picked Kamala Harris as his running mate, the usual raucous introduction rally was replaced by a few remarks in Biden’s hometown of Wilmington, Del., and a virtual fundraiser they both attended.

Even Donald Trump, whose 2016 victorious campaign was largely based on mass rallies and who started 2020 with the same strategy, has been forced to downgrade to smaller events. Even the Republican National Convention, usually one of the high points of the traditional campaign, will see a mix of in-person, livestreamed and pre-recorded speakers. It is tempting to see this juxtaposition in style as a foreshadowing of tomorrow's politics: virtual reality campaign rallies, where millions of people can attend, "as if they were there," a speech by their candidate.

However, without being able to predict the future, we can, and should, consider the past. Specifically, we can return to the last two decades of the 19th century, when the idea of a candidate openly campaigning for the Presidency was just becoming acceptable. Despite rare occurrences before, it was not until the 1880s that the need for a presidential candidate to appeal directly to his public became entrenched in popular campaign culture. One of the vectors of this transformation was a form of campaigning that is now forgotten, but which resonates strangely with Biden's current events: the front-porch campaign.

Getting the Candidate on the Stump

At the beginning of the 1880s, Democratic and Republicans candidates observed a tradition of reserve and silence during campaigns. Despite a few exceptions, such as William Henry Harrison in 1840 or Stephen Douglas in 1860, the weight of George Washington's legacy remained influential on the structure of American electoral contests: presidential candidates were to stay humble and discreet, away from the ruckus of electioneering. Going out to campaign and addressing the crowd made a candidate seem unworthy of the office he coveted.

However, during the 1880 campaign, a change in mentality emerged. Under fire from Democratic attacks, Republican candidate James A. Garfield lamented in a letter that he could not respond by hitting the road to carry his message: "If I could take the stump and bear a fighting share in the campaign, I should feel happier [...] you can hardly imagine how I ached to be free for one day to handle Hendricks as he deserves for his unmanly speech at Indianapolis.” While confined to his home, Garfield continued to receive delegations of dignitaries, elected officials and financial supporters, playing a relatively traditional, private role in the campaign.

But, as time passed, Garfield increased the number and variety of those delegations. As the November deadline approached, it was no longer just a few important people that he welcomed to his table, but dozens, even hundreds of people that he received on his front porch: women's groups campaigning for the right to vote, associations in favor of prohibition, residents of a specific county. The delegations followed one after the other to the home of the candidate, who listened to their demands and offered each group a response in the form of impromptu speeches.

Garfield's individual initiative laid the groundwork for a practice that would become institutionalized in 1888 and would feature prominently during William McKinley's 1896 run as the Republican candidate. Under the lead of Mark Hanna, the front-porch campaign was organized on an industrial scale. The Republican Party organized and financed the travel of the various delegations, which had to provide their remarks in advance to the candidate's teams, who were in turn responsible for drafting the responses. The city of Canton, Ohio, where McKinley resided, was transformed into a place of pilgrimage, decorated with the colors of the Union and the Grand Old Party. In all, it is estimated that nearly 750,000 people made the trip to Canton during the few months of the 1896 campaign.

This original form of campaigning was based on an intellectual compromise for the Republican Party, between the demand for dignity inherited from the early years of the Republic and the need to put the candidate forward and to reach out to the public in an increasingly democratic century. By staying at home, candidates such as Garfield or Harrison couldn’t be accused of going out to hunt for votes and begging for the support of their fellow citizens. Furthermore, by arranging for people to come to their homes, candidates created a highly personalized bond, offering a glimpse into the candidate's life and allowing them to put their oratory skills to good use.

The Republican Party's adoption of this campaign repertoire was also reinforced by the failure of James Blaine in 1884, four years after Garfield's innovation. Blaine, extremely popular and controversial, decided to take to the road to defend his message and his candidacy, which was contested within his own party. However, during these trips, he made two blunders while passing through New York and decisively alienated part of the Irish and Catholic electorate.

He was narrowly defeated after losing New York State, leaving the way clear for Grover Cleveland, the first Democratic president since the Civil War. Blaine’s loss and its direct link with his stumping strategy helped cement the idea of a campaign from home. As Benjamin Harrison, candidate in 1888, said, "There is a great risk of meeting a fool at home, but the candidate who travels cannot escape him." In other words, the front-porch campaign ensured the candidate and his team had  complete control of the narrative, by controlling closely whom the candidate was talking to and what he was talking about. In the same vein, Biden’s basement campaign creates a controlled environment for a candidate who has sometimes been described as gaffe-prone.

Moreover, like Biden, Garfield’s front-porch campaign resulted from an almost accidental consequence of historical context. Yet in 1880, he improvised a way to reach a wider audience when he was constrained by a centuries-old tradition of reserve and silence. Torn between tradition and modernity, he used technological advancements, such as the development of railways across the country and the increased press diffusion to create a porch campaign that would later become a trademark of late 19th and early 20th century presidential elections.

Similarly, Joe Biden, himself constrained by the most important pandemic in recent history, has to find ways to reach the widest audience possible while staying at home. Using contemporary communications media, he is able to adapt his campaign strategy to the current context and legitimize new repertoires that may become standard practices in future campaigns. The same way Garfield’s victory in 1880 and Blaine’s failure in 1884 cemented the front-porch campaign, the future relevance of Biden’s innovations will be closely tied to his success in November. Like the front-porch campaign, the basement campaign could reframe the relation between a candidate and his electorate, creating a new intimacy and legitimizing, once again, the candidate’s home as a central place in presidential campaigns.