Who Shaped the Story of Hiroshima and Nagasaki?

William Johnston is the John E. Andrus Professor of History at Wesleyan University in Connecticut. 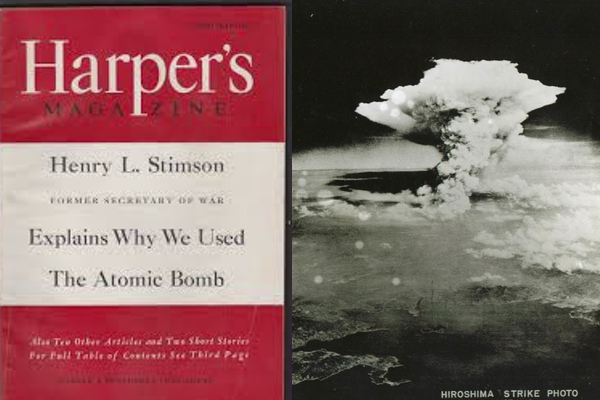 As we mark the seventy-fifth anniversary of the nuclear attacks on Hiroshima and Nagasaki, it is a good time to re-think the history of those events. It might come as a surprise that what most Americans associate with Hiroshima and Nagasaki says more about how contemporary American leaders wanted those bombings remembered than it does about their real history.

The standing narrative has three main points: President Harry Truman personally ordered the attacks; they decisively ended the war against Japan; and without them there would have been as many as a million American casualties. This narrative was created in response to questions in the popular press about the bombings that emerged soon after the war.

One short essay in particular, “The Literacy of Survival,” by the editor and writer Norman Cousins, published in the Saturday Review on September 14, 1946, helped trigger this narrative’s creation. Cousins was writing in response to the New Yorker’s publication of John Hersey’s “Hiroshima” that August. While the U.S. government and military were censoring information about radiation in the Hiroshima and Nagasaki bombings, Cousins pointed out that thousands of bombing victims would die in coming years from radiation sickness. He asked whether people had “any sense of responsibility for the crime of Hiroshima and Nagasaki.” He asked why the government ignored scientists who urged demonstrating the bomb to the Japanese before dropping it on a city. He asked how to deal with a statement by “a Navy spokesman” that the Japanese would have surrendered without using the bomb. This “spokesman” was probably Admiral William F. “Bull” Halsey, who, along with others such as General Dwight Eisenhower, opposed the nuclear attacks.

These questions distressed leaders of the Manhattan Project, which had developed the weapons. First to respond was Karl T. Compton, a physicist and president of the Massachusetts Institute of Technology. In an article entitled “If the Atomic Bomb Had Not Been Used,” published in The Atlantic Monthly in December, 1946, he planted seeds for what became the standing narrative of these attacks. Compton argued that the Japanese military’s refusal to surrender meant bombing Hiroshima and Nagasaki “saved hundreds of thousands—perhaps several millions—of lives, both American and Japanese.” He based this claim on the assumption that the attacks had ended the war.

Compton remained silent about the Soviet declaration of war on Japan on August 9, 1945, which gobsmacked Japanese leaders. The previous month they had asked the Soviet Union, at that point in an officially neutral relationship with Japan, to help negotiate an end to the war with the United States. They also knew that if used against them the Soviet juggernaut would crush the Japanese army. The American incendiary bombings that had started in March, 1945 had little effect on Japanese leaders, and most of those leaders saw the nuclear attacks simply as an extension of those earlier bombings. The Soviet declaration of war, however, spelled doom for Japanese forces in China and Korea.

Another Manhattan Project leader, James Conant, a chemist and president of Harvard University, found Cousins’s article disturbing. In response, he arranged for McGeorge Bundy to ghost write an article for Henry Stimson, the former Secretary of War (Defense) under Roosevelt and Truman. Conant instructed Bundy, an aide to Stimson who later worked in the Defense Department during the Vietnam war era, to compose a “statement of fact” that “would do a great deal to correct certain misunderstandings now current in the American public.” Bundy drafted the article, which Conant edited and Stimson approved. It emphasized a rational decision-making process leading to the attacks. “The Decision to Use the Atomic Bomb” was published under Stimson’s name in Harper’s Magazine in February, 1947. One statement in the article, however, undercut its main premise: “At no time, from 1941 to 1945, did I ever hear it suggested by the President, or by any other responsible member of the government, that atomic energy should not be used in the war.” In short, “to bomb or not to bomb” was never a question. The “decision,” rather, addressed how and where to use the bombs. This article also claimed that invading the Japanese mainland “might be expected to cost over a million casualties, to American forces alone.” This number was possibly discussed privately but there is no evidence it was discussed officially. Stimson’s essay also asserts that the bombings “served exactly the purpose we intended,” forcing the Japanese surrender. Stimson, like Compton, never mentions the Soviet declaration of war and its influence on Japanese decision making. Nor does he mention the effects of the bombs, radiological or otherwise, on their victims. Stimson, Conant, Bundy, and Compton all side-stepped Cousins’s questions. But they achieved their goal of pointing the narrative in a different direction.

Also in February, 1947, President Harry Truman published a brief letter in The Atlantic supporting Compton’s analysis. He addressed Compton directly: “Your statement in the Atlantic Monthly is a fair analysis of the situation except that the final decision had to be made by the President, and was made after a complete survey of the whole situation had been made.” Truman repeated this claim so frequently that it also became accepted as historical fact. Yet again, there is no record of Truman ever making a final decision whether to bomb Hiroshima or Nagasaki.

Two archival records do reveal a key decision by Truman, made on August 10, 1945, the day after the Nagasaki bombing. One is a hand-written addendum to a letter from General Leslie Groves, the military commander in charge of the Manhattan Project, to General George Marshall, the Chief of Staff, about the availability of subsequent bombs. It reads: “It is not to be released on Japan without express authority from the President.” The other is an entry with the same date in the diary of Henry A. Wallace, the Secretary of Commerce. Wallace wrote: “Truman said he had given orders to stop atomic bombing. He said the thought of wiping out another 100,000 people was too horrible. He didn’t like the idea of killing, as he said, ‘all those kids.’”

In short, the bombings of Hiroshima and Nagasaki were the more result of a process that Franklin Roosevelt had initiated in 1941 than a presidential decision about whether to drop the bombs. Leslie Groves and others made the same assertion. The military simply dropped two bombs when they became available.

Ultimately, the historical record is ambiguous regarding the role the bombings played in the Japanese surrender. They arguably played a contributing role, but it is not clear that Emperor Hirohito  considered them decisive when he ended the war. What might have occurred without bombing Hiroshima and Nagasaki is not a question for history. It is a speculative question, akin to asking what might have happened if Lincoln had avoided war against the Confederacy.

None of this in any way denigrates the American military or the heroism of American war veterans. It is, rather, to make clear that common understandings of the nuclear attacks on Hiroshima and Nagasaki are less about historical truth than about a narrative that particular power brokers wanted to tell. This is especially important now, when national leaders daily challenge our relationship with the truth in attempts to create politically convenient narratives. Our understanding of history informs our attitudes and actions alike. When, for whatever reasons, fact-based history makes us uncomfortable, we should look to the source of our discomfort rather than attempt to change the historical narrative simply to make us feel better.