Thomas E. Patterson is Bradlee Professor of Government & the Press at the Harvard Kennedy School. This article is excerpted from the first chapter of his recently published book Is the Republican Party Destroying Itself? 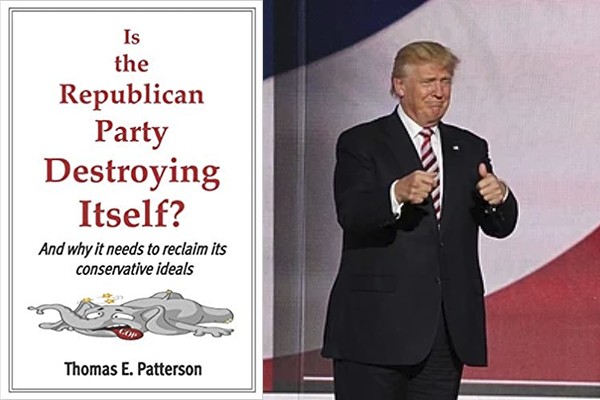 There is nothing in today’s balance of power between America’s two political parties that would predict a dark future for the Republican Party. The GOP holds the presidency and has a majority in the Senate. The Party also looks healthy through the lens of the past four decades. A year after the Watergate scandal forced President Richard Nixon to resign, political scientist Everett Carll Ladd described America’s two-party system as a party-and-a-half system. The 1974 midterm election had been a blowout. The Democrats had picked up 49 House and four Senate seats. In the 1976 election, Democrats won the presidency, a two-thirds majority in the House, and a filibuster-proof three-fifths majority in the Senate. It didn’t last. Since 1980, the GOP has held the presidency for more years than the Democratic Party and controlled Congress for nearly as many years.

Nevertheless, the GOP has walked itself into five traps, each of which threatens its future. Judging from history, one trap alone could be enough to send it into a tailspin. After the stock market crash of 1929, the Republican Party, which controlled the presidency and both houses of Congress, was trapped by its laissez-faire belief that the economy was self-correcting. Republicans stuck to their belief even as joblessness soared. Americans weren’t willing to wait for the economy to recover on its own. They voted heavily Democratic in the next three presidential elections, ushering in an era of Democratic control. In the period from 1932 to 1968, the Democrats held the presidency except for Dwight Eisenhower’s two terms of office and controlled the House and Senate for all but four years.

Today’s Republican Party is confronting five traps of its own making. They vary in their lethality but, together, could cripple the party for a generation or more. One trap is its steady movement to the right, which has distanced the party from the moderate voters who hold the balance of power in a two-party system. A second trap is demographic change. Younger adults and minorities vote heavily Democratic, and their numbers increase with each passing election. The older white voters upon whom the GOP depends are shrinking in number. Within two decades, based on demographic change alone, the GOP faces the prospect of being a second-rate party. Right-wing media are the Republicans’ third trap. A powerful force within the party, they have tied the GOP to policy positions and versions of reality that are blunting its ability to govern and to attract new voters. A fourth trap is the large tax cuts that the GOP has three times given the wealthy. The rich have reaped a windfall but at a high cost to the GOP. It has soiled its image as the party of the middle class and created a split between its working-class and marketplace voters. The fifth trap is the GOP’s disregard for democratic norms and institutions, including its effort through voter ID laws to suppress the vote of minorities and lower-income Americans. In the process, it has made lasting enemies and created instruments of power that can be used against it.

America would not benefit from the demise of the Republican Party, nor can it flourish from the course that the GOP is pursuing. We need a healthy and competitive two-party system, which will require the restoration of what historian Arthur Schlesinger, Jr. called the “vital center.” It’s the place on the political spectrum where interests come together to develop policies that serve the interests of the many rather than those of a partisan few. The vital center was also what the framers of the Constitution were seeking when they debated how best to organize a political system that would govern a large and diverse nation. They divided the powers of government in order to force competing interests to engage in compromise and negotiation in the process of enacting the nation’s laws.

Neither party alone can serve the nation’s interests. As philosopher John Stuart Mill noted, a democracy requires both a responsible right-center party and a responsible left-center party. “A party of order or stability, and a party of progress or reform, are both necessary elements of a healthy state of political life,” Mill wrote. ”Each of these modes of thinking derives its utility from the deficiencies of the other; but it is in a great measure the opposition of the other that keeps each within the limits of reason and sanity.”