Max Felker-Kantor is Assistant Professor of History at Ball State University and author of Policing Los Angeles: Race, Resistance, and the Rise of the LAPD (UNC Press, 2018). 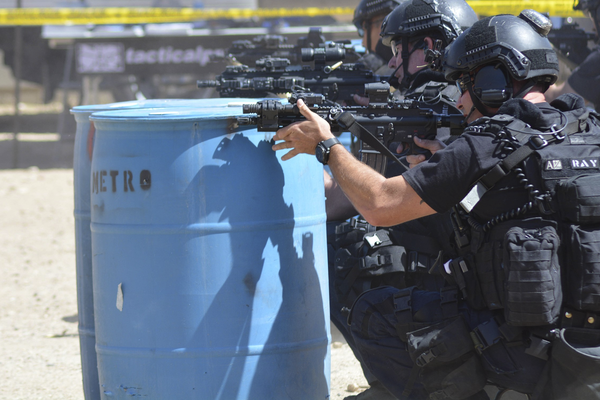 Calls to defund the police have grown in recent weeks following the nationwide outpouring of protest in response to the killing of George Floyd by Minneapolis Police officer Derek Chauvin. As the demands for the defunding of the police suggest, the goal of activists is not limited solely to removing or prosecuting so-called “bad apple” officers. Instead, they are centered on systemic changes to the very nature of policing in American society.

Although pressure for defunding the police - and dismantling the police in the case of Minneapolis - has gained momentum, Democrats do not wholly support such measures. Most notably, Democratic presidential candidate Joe Biden has explicitly opposed proposals to defund the police. Not only does Biden oppose moves to address systemic problems of American policing, but has proposed expanding police funding. “I do not support defunding police,” Biden wrote in USA Today. “The better answer is to give police departments the resources they need to implement meaningful reforms, and to condition other federal dollars on completing those reforms.” Stating that he has “long been a firm believer in the power of community policing,” Biden has suggested providing police with an additional $300 million to “to reinvigorate community policing in our country,” alongside a host of procedural reforms including national use of force standard, increased use of body cameras, and diversifying police departments,

Yet Biden’s “real reforms” are part of a long history of liberal responses to police violence that further embed the police power into the liberal state. In the process, this liberal law-and-order, as I call it in my book Policing Los Angeles, led to the expansion of police power and contributed to the reliance on the police to contain the very fallout of social and economic inequality that activists are now rising up against.

Liberal law-and-order was a hallmark of the twenty-year mayoral administration of Tom Bradley in Los Angeles, the city’s first African American mayor. Bradley, a 21-year veteran of the LAPD left the force in 1961 to enter a career in politics, becoming a city councilman in 1963. Bradley’s career as a councilman was marked by strong criticism of the LAPD. After the 1965 Watts uprising, Bradley called for reforms to address problems of racism within the department and for greater civilian oversight. Yet, instead of reducing the police power, during Bradley’s mayoral administration the Los Angeles Police Department (LAPD) become more militarized, more powerful, and more present in the daily life of the city’s residents of color. This led to the largest moment of urban unrest in American history in 1992.

Notwithstanding LAPD Chief William Parker’s opposition to the limited reforms spurred by the McCone Commissioninvestigation of the 1965 Watts riots, Bradley continued to work toward reshaping the relationship between the police and residents of color. Most notably, Bradley was a strong proponent of police-community relations programs. While intended to enhance understanding between residents and the police, such reforms brought police into close contact with youth of color in particular and extended police authority into new arenas, such as support for the police to work with youth in music clubs and recreation programs.

When Bradley first ran for mayor in 1969, he extended the liberal approach by promising to pursue reforms intended to ensure the police treated residents fairly while, at the same time, making clear that the police would have the power and resources needed to keep the city safe. While he lost the 1969 election to the race-baiting Sam Yorty, Bradley ran again - and won - in 1973 where he campaigned on an even more explicit liberal law-and-order platform. “The insane political division which somehow makes it ‘conservative’ to be against crime and ‘liberal’ to be for civil liberties,” Bradley told the Los Angeles Bar, “has to start coming apart.”

While in office, Bradley sought to increase oversight of the department by appointing new members to the Board of Police Commissioners, limit extravagant spending by the police, and promote community-relations programs. Tying federal funding from the LEAA to procedural reforms was one means by which Bradley hoped to exert greater control. Using the newly-created Mayor’s Office of Criminal Justice Planning (MOCJP), Bradley streamlined criminal justice grant-proposals and required the LAPD to submit proposals for state and federal law enforcement funding to the MOCJP - something similar to what Biden has proposed by linking federal money to lukewarm reforms.

Bradley also engaged in all-too-familiar procedural reforms, such as changing the LAPD’s use of force policies and adding human relations training - the precursor to today’s implicit bias training - for officers. Such liberal law-and-order responses to police killings, however, undermined demands for greater police accountability and external oversight of the department and reinforced the department’s authority to set its own limits.

These procedural reforms and mayoral oversight not only failed to rein in the LAPD but extended its authority for at least two reasons.

First, police budgets derived overwhelmingly from local sources to which federal funding was at best supplemental. Bradley, for instance, fulfilled a campaign promise to ensure a well-funded police department (while also opposing some of the LAPD’s most egregious requests, such as for jets and submarines). In 1972, for example, the LAPD’s total operating cost (including pensions) was $198.5 million, which accounted for 35.5 percent of the city’s budget. By 1982, the department’s total operating cost increased to $525 million, or 34.9 percent of the city budget.

Second, reforms meant to increase understanding between the police and community did not alter the structure of police power in the city. For instance, Bradley cooperated with LAPD Chief Ed Davis to promote community-oriented policing, known as TEAM policing. However, TEAM policing did nothing to shift power from the police to the community. One study conducted in the early 1970s found, “responsiveness to citizen demands is being sacrificed to the objective of crime control.” Efforts to wed the police to communities, in other words, enhanced police power. The TEAM policing model, the same study found, was “an attempt at formal cooptation—participation without control.” Such findings continue to plague contemporary community relations programs as well.

But the problem was not only one of liberal political support for the police. The police positioned themselves as an independent political entity within the liberal state. Under Chiefs of Police Ed Davis and Daryl Gates, the LAPD successfully resisted systemic changes that would have reduced their ability to discipline officers and capitalized on crises - that they in part produced - to expand their authority on the streets.

During Bradley’s first term, fears of juvenile crime led to demands from the police for new capacity to deal with the crisis. In response, Bradley pledged to crack down on youth crime and to release the police to address school safety concerns. Strengthening the juvenile justice system, however, wed the police deeper into institutions where they had not been before. While some funding was used to develop gang prevention and intervention programs, the LAPD also cooperated with the Los Angeles Unified School District (LAUSD) to arrest truants around inner-city schools of color. In addition, the LAPD developed a program to track “at-risk” kids deemed either criminal or potential criminals known as the Data Disposition Coordination Project (DDCP). While the DDCP was short-lived, the LAPD extended the capacity to police “at-risk” kids with the establishment of its notorious anti-gang units, Community Resources Against Street Hoodlums, or CRASH.

At no point did liberals - locally and nationally - rely more on the police to contain those dispossessed by social and economic inequality than during the 1980s war on drugs and gangs. Echoing the claims of Daryl Gates, Bradley often referred to kids as “thugs” and promised to root out gang and drug violence using whatever means necessary. Bradley and Gates - although often at odds - cooperated in this campaign by centralizing all elements of the city’s antidrug and antigang programs in ways that enabled the LAPD to marshal “resources anytime, anywhere and on any scale to effectively wage battle against street drug peddlers and gangs narcotics traffickers.” Massive gang sweeps and militarized drug raids - many carried out by CRASH units and SWAT teams - added to the LAPD’s martial capacity and exacerbated tensions between communities of color and the police.

When the video of the beating of Rodney King shocked the nation in 1991, Gates responded with an all-too-common claim. Gates denied that the beating reflected a systemic problem in the department, concluding, “This [incident] is an aberration.” Such “bad apples” defenses, which Biden has used, reinforced the connection between the police and the liberal state. Promising to treat systemic problems with more training, community policing, or procedural reform, liberal law-and-order had created the conditions for explosion of protest following the acquittal of the officers involved in the King beating.

While the 1992 Los Angeles rebellion led to some structural reforms, most notably limiting the tenure of the chief of police, the LAPD continued to maintain its pride of place in the city’s political power structure. Commitments to community policing and a consent decree leading to federal oversight did not fundamentally change the deep intersection between policing and the liberal state. Community policing, in particular, had not solved the fundamental power imbalance between police and residents. As the People’s Budget LA has shown, the LAPD continues to receive 54 percent of the city’s general fund.

Across the country the police also got more - more authority and resources under the guise of liberal reform. Through the 1990s, the federal government, at the behest of Bill Clinton and then-senator Biden, pushed through funding for more 100,000 more police officers as part of the 1994 crime bill. Other funding went to expand community policing, training, and efforts to diversify police departments.

These liberal law-and-order reforms did not reduce police power nor racist policing in Los Angeles and across the country. But they certainly expanded the power and authority of the police. Procedural reforms, such as those promoted by Biden, did not work in the past and will not work now. The history of liberal law-and-order reveals that procedural reforms implemented on top of a structure of policing that has been empowered to protect property and control “disorder” are not only doomed to fail but will produce the conditions for more protest and resistance.