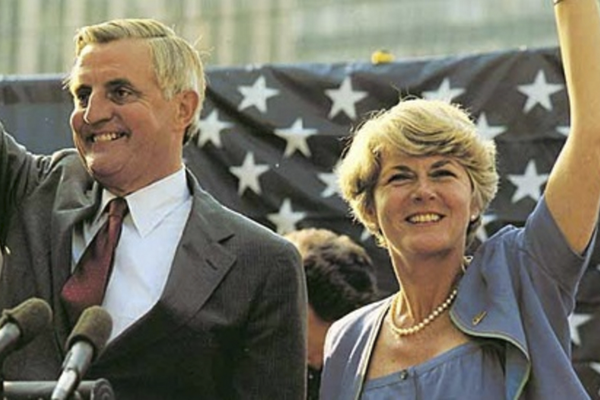 Vice President Joe Biden’s promise to choose a woman as his running mate was historic.  Never before had a major presidential candidate so defined his search.  Some suggest Biden should choose an African-American or Hispanic woman, an even more historic commitment. In any event, Biden’s running mate will be the first woman vice-presidential candidate with a strong chance of election.   She will be the product not simply of Biden’s decision but of a process that began 36 years ago when former Vice President Walter F. Mondale opened the presidential ticket to women and other previously-excluded minorities.

When Mondale announced his selection of Rep. Geraldine Ferraro as his running mate on July 12, 1984, it marked the first time anyone other than a man was a major party national candidate in a general election.  Mondale’s decision was a milestone in giving women access to leadership roles.  But as Ferraro’s acceptance speech a week later recognized, Mondale’s decision had broader significance.  She began her remarks: “My name is Geraldine Ferraro.  I stand before you to proclaim tonight: America is the land where dreams can come true for all of us.”

Ferraro’s opening thought implicitly recognized that Mondale’s pioneering action was not simply selecting a woman running mate but in conducting the first diverse selection process in American history.  Mondale chose Ferraro from a pool that included members of demographic groups traditionally excluded from national politics--women, African Americans, a Hispanic American, and a Jewish American among others.  Against considerable resistance, Mondale built a diverse pool of qualified options even though few from those groups then or had recently held the positions from which vice-presidential candidates usually came—senators, high executive officials, governors or members of the House of Representatives.

Presidential politics had been exclusively for white Christian male politicians.   John F. Kennedy overcame anti-Catholic bias in 1960 to become the first Catholic elected to national office.  From 1964 to 1980, the “diversity question” was whether a ticket should include a Catholic, as the unsuccessful 1964 Republican (William Miller) and 1968 and 1972 Democratic (Edmund Muskie, Thomas F. Eagleton and Sargent Shriver) tickets did.  Sen. Margaret Chase Smith in 1964 and Reps. Shirley Chisholm and Patsy Mink in 1972 ran largely symbolic campaigns for their party’s presidential nomination.  Sen. George McGovern contacted his friend, Sen. Abe Ribicoff, a Jew, about possibly being his running mate, but Ribicoff, like many others, found that prospect unappealing.  Ambassador to the United Kingdom Anne Armstrong was among four finalists before President Gerald R. Ford chose Sen. Bob Dole as his 1976 running mate, but Ford thought the risk of choosing a woman was too great.  Rev. Jesse Jackson won primaries in Washington, D.C. and three southern states and attracted about 18% of the votes in 1984, but never had a chance at the nomination.

Eligibility for the general election ticket seemed limited to white male Christians in 1984 because that demographic essentially monopolized the positions from which vice-presidential candidates were chosen.  Every first-time running mate on a major party ticket in the 20th century had previously been a senator, governor, or member of the House or held high national executive office (with the sole exception of newspaper publisher Frank Knox in 1936).  Yet in 1984 there were only two women in the Senate, both Republicans, no blacks or Hispanics, and two Asian-Americans from Hawaii.  The only Democratic woman governor was Kentucky’s just-elected Martha Layne Collins.  Few women (Patricia Roberts Harris, Shirley Hufstedler, Juanita Kreps) or black people (Harris, Andrew Young, Donald McHenry) had recently served in Cabinet-level positions in Democratic administrations, and only the controversial Young had held high electoral office.  Only 13 Democratic women and 21 African-Americans served in the House.  Most of the seven Jewish senators were Republicans.

Mondale was criticized because the women and minorities he interviewed lacked the credentials traditionally associated with national candidates.  None of the women or minorities were senators or former Cabinet members and only Collins was a governor and Ferraro a member of the House.  But Mondale understood the fallacy of imposing conventional criteria since societal bias had denied such groups those opportunities.  Mondale thought some on his list had national talent.  Feinstein later became a senator from California and has been elected six times.  Bradley had narrowly lost for governor of California in 1982; he had led in the polls, but apparently many who told pollsters they would support him apparently changed their minds in the voting booth (the phenomenon of white voters’ support for minority candidates in polls dramatically exceeding their actual vote has been termed the “Bradley Effect—ed.). Cisneros later served in Bill Clinton’s Cabinet.  Dukakis and Bentsen were the 1988 Democratic ticket.

And there was Ferraro.  Polls indicated that Ferraro’s selection initially made the election competitive before a concerted Republican attack, largely directed at her husband’s business activities, tarnished her image.  Ferraro ran a credible campaign and held her own during the vice-presidential debate.

Mondale’s selection process heralded a new opening of American politics to previously disqualified constituencies.  Jackson was the runner up in the 1988 Democratic presidential primaries.  During the next quarter century, members of those groups occasionally were considered for the second spot (Elizabeth Dole, 1988; Colin Powell, 1992; Christine Todd Whitman and Jeanne Shaheen, 2000), sometimes perfunctorily, until Joe Lieberman (2000) and Sarah Palin (2008) were unsuccessful running mates.

In 2008, the competition between Senators Barack Obama and Hillary Clinton for the Democratic presidential nomination involved two figures who dominated Democratic presidential politics from 2008-2016.  Talented women and minorities served in the Clinton, George W. Bush and Obama administrations.  Three of the four Supreme Court appointments Clinton and Obama made elevated women, one being the first Hispanic appointed to that tribunal.  From 1997 to 2013, four of the five secretaries of state were women or minorities.

If Biden’s running mate is successful, she will be the first woman elected to national office after 116 men won those positions in the first 58 elections.  That would be a historic moment, the first time the election to the second office would have produced news more significant than the presidential result.  Yet it will be only the latest chapter in the journey that began in 1984 when Mondale opened his vice-presidential process to persons from such traditionally excluded groups and chose Ferraro as his running mate.

Editor's note: this article was submitted and accepted for publication before Senator Amy Klobuchar's decision to withdraw from consideration. It has been updated to reflect this development.