Ways that Donald Trump is Just Like Henry Ford, And Why That’s Not Good for American Democracy

Victoria Woeste is an independent scholar and author of Henry Ford’s War on Jews and the Legal Battle Against Hate Speech (Stanford, 2012). 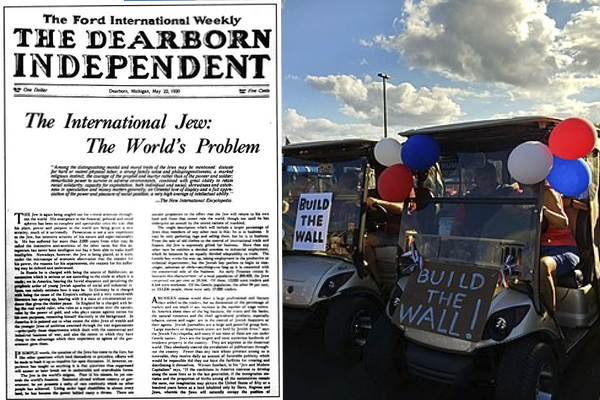 On May 21, speaking at the Ford Motor Company’s Rawsonville plant in Ypsilanti, Michigan, Donald Trump paid his latest homage to Henry Ford, lauding the family’s “good bloodlines” with Ford’s great grandson sitting in the front row.

Ford, like Trump, was obsessed with bloodlines—with the idea that race and genetic origins determined who counted as the “best people.”

Trump has consistently placed antisemitism at the center of his administration’s vision of America as a white nationalist ethnostate. As Ford did a century ago, he has built a nationwide public following by openly approving of a racially structured society. Like Ford, Trump has mastered the art of speaking in coded language that signals his true intent to racists, xenophobes, and antisemites. Why it works so well for Trump has been the question of his entire political ascendance. The answer lies in the fact that it worked really well for Ford during the heyday of his career as a publisher of hate speech. Trump is following a script steeped in Americans’ unchecked tendency to make cultural heroes out of industrial kings, a script Ford honed to perfection. Their shared script espouses antisemitism, eugenics, and white nationalism, all of which resonate with a fairly consistent part of the country no matter the century. But the message gets its sustaining power because it comes from the two most prominent contributors to the cult of the businessman.

Here are a few of the ways that Donald Trump takes after Henry Ford:

One century ago this week, Ford published the first of 92 articles under the banner headline of “The International Jew.” The series closely tracked the conspiratorial logic of the Russian antisemitic screed The Protocols of the Elders of Zion. Ford’s newspaper, The Dearborn Independent, rewrote the Protocols for its American audience, thus mass producing the most widely read piece of antisemitic propaganda in American history. The publication repeatedly drove home the idea that Jews were a separate race, not just a religious people, and that their own leaders admitted it:

“Blood is the basis and sub-stratum of the race idea, and no people on the face of the globe can lay claim with so much right to purity of blood, and unity of blood, as the Jews.”

Ford’s published anti-Jewish campaign ran for the better part of a decade. For years he defied a libel lawsuit he had no hope of winning, and then he evaded the consequences of his newspaper’s hate speech by torpedoing the case and issuing an apology written by others in his name.

Immigrants have no place in this America

Though Ford professed to accept immigration as a good thing for his business and the country, his “Sociological Department” at Ford Motor made it clear that the only good immigrant was an assimilated immigrant: abstentious, square dancing, minimally educated Christian immigrants made the best assembly line workers. Quiescent and apolitical workers would do as they were told and certainly would have no need to join unions. All of these policies pointed to the same goal: achieving a society based on racial hierarchy.

Trump goes Ford one better: no immigrants, no asylum seekers, no brown people. Deportation is the administration’s official policy; he would whitewash the entire country if he could. Trump’s “America First” foreign policy invokes the ignominious history of American isolationism and its foremost proponent during the 1930s, the aviator Charles Lindbergh. Lindbergh, whose antisemitism was as merciless as Ford’s, openly associated with the Nazi government and urged Congress to negotiate with Hitler in the late 1930s.

That is why Trump consciously and deliberately invokes Ford’s racism—the appeal to “bloodlines” was merely the latest variation on the theme that gives succor to white nationalists—at opportune moments such as his visit to the Ford plant in the midst of pandemic and natural disaster in Michigan. The racism and antisemitism have become the point, for Trump as they were for Ford, because both seek to remake American society in a particular mold.

Ford resented the function of a free press in American society and was terminally dissatisfied with his coverage. At the same time, he used the press to control his image and burnish his brand. He purchased the Independent in 1918 to aid in his attack on the Chicago Tribune after it called him an “ignorant idealist” and an “anarchist” (a Michigan jury awarded him $.06 in damages!) because he felt he could not reach Americans through the filter of the press.  Trump’s attacks on “fake media” have been a staple of his relationship with the press; he regularly wages war against CNN, MSNBC, the Washington Post, the New York Times, and other outlets on Twitter. But his very invocation of the phrase “fake news” points directly to Ford, The International Jew, and The Protocols. To attack the free press plays into one of the hoariest antisemitic tropes of all: the idea that Jews control the press as part of their conspiracy to take over the world. The Nazi chant of lugenpresse (lying press) surfaced during the 2016 presidential campaign.

Ford flirted with open admiration of Hitler during the 1930s, accepting the Grand Cross of the German Eagle in 1938—the highest civilian honor Germany could bestow—and encouraging antisemitic publishers to reissue The International Jew without the bother of respecting copyright. Hitler returned the favor, alluding to Ford in Mein Kampf and keeping Ford’s portrait in his office. Trump’s astonishing embrace of modern American neo-Nazis as “fine people” after the Charlottesville demonstration in August 2017 resulted in the deaths of three people was part of a long-term plan to associate the influence of his presidency with the most abhorrent manifestation of twentieth-century fascism. When his statement on Holocaust Remembrance Day in 2017 omitted mention of Jews or antisemitism, it was no accident.

Ford had interesting relationships with wealth and lending institutions. He was the most famous self-made man in American history, rising from meager means and a sixth grade education to become the world’s richest individual and owner of the most successful manufacturing concern of his generation. But much of that narrative was built on carefully constructed mythology. Ford didn’t invent the automobile, or even the internal combustion engine; like many enterprising auto manufacturers, he adapted the inventions of others and then fought like hell in the courts to protect his patents and industrial processes. He bought out shareholders rather than pay dividends and manipulated the legal system to obtain the results he desired or to avoid the consequences when he lost. Still, Americans saw him as a true populist taking on the financial establishment, which he demonized as part of the worldwide Jewish conspiracy while relying on bank financing to bail out the Ford Motor Company at critical times.

Ford, at least, had an actual product that ran on his name. Trump turned his eponymous entrepreneurial style into his marketable product. He then sold his brand to banks, developers, and financiers first to build his real estate empire, then to keep up the appearance of empire when he could not manage his debt. The Trump brand is his only asset. The real estate dominion is little more than a pyramid scheme in which he repeatedly borrows against his indebted properties to build new properties that are in turn mortgaged beyond their value. Nearly every project landed him in bankruptcy, yet he always manages to find new investors.  Like Ford, who branched out into other countries in order to obtain control over all the raw materials he needed to build cars, Trump moved into global financial markets to expand his empire. Over the past thirty years he has sold notes to Saudis, Russians, and east Asians; the details of these transactions remain interred with his undisclosed tax returns. In short, both men used exactly the global financial structures they decried in their populist appeals to create the appearance of secure wealth, and both fiercely resisted inquiries into their affairs to protect both their businesses and their carefully curated public images.

Ford had to give away his thinking. He ordered his car dealers to press Independent subscriptions on automobile buyers, forcing them to eat the costs and give the paper away in order to meet circulation quotas. Trump’s resorts bought thousands of copies of The Art of the Deal to sell to visitors and ended up comping them just to move the inventory.

Ford surrounded himself with sycophants and like-minded racists who encouraged his baser instincts and promoted his brand. His prolific catalogue of public statements left reporters confused as to what he really meant, and enablers such as Independent editor William J. Cameron and private secretary Ernest Liebold routinely “explained” to the press what Mr. Ford intended to convey. Anyone who questioned Ford’s business strategies or undermined his commercial and cultural brand got the boot. Even loyalists such as Cameron and Liebold eventually outlived their usefulness and yet in retirement continued to explain—and defend—the boss.

Trump, too, works in a bubble constructed by a small coterie of advisors who tell him what he wants to hear and do not trouble him with inconvenient facts, even when pandemic threatens the lives of the people he is supposed to serve. Roger Stone, Michael Cohen, Michael Flynn and many more have lied, laundered money, and served jail time for Trump, long past the point when rational minds wonder what is in it for them. Stephen Miller, the architect of Trump’s racist state, is Trump’s Ernest Liebold, writing his speeches and coaching him on contextually appropriate allusions.

There is no need for Americans to wonder where Trump gets his racist program from and every reason to worry about where he will go with it next. Praising the bloodlines of his commercial and political model was merely the latest of his unsubtle cues, this one with a eugenic flair.  Trump no longer needs to quote Ford directly to signal his allegiance to Ford’s racism or cloak himself with the cult of the business industrial hero. It’s now up to Americans to decode the signals and decide what they value more: the explicitly racist-centered society or the democratically governed state.

Editor's Note: This essay was expanded and adapted for HNN from a thread on Victoria Woeste's Twitter.