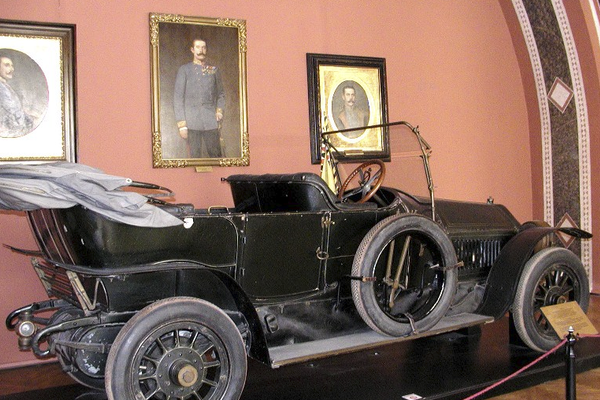 This car carried the late late Archduke Franz Ferdinand when he was assassinated.

As the years 1914, 1929, and 2020 began, many people thought their futures looked good. This optimistic feeling was captured well in the memoir of the Austrian Jewish writer Stefan Zweig:

When I attempt to find a simple formula for the period in which I grew up, prior to the First Word War, I hope that I convey its fullness by calling it the Golden Age of Security. . . .

. . . The world offered itself to me like a fruit, beautiful and rich with promise, in that radiant summer [of 1914]. And I loved it for its present, and for its even greater future.

Then, . . . [on 28 June 1914], in Sarajevo, the shot was fired which in a single second shattered the world of security and creative reason in which we had been educated, grown up and been at home--shattered it like a hollow vessel of clay.

That assassin’s shot, which killed Austrian Archduke Franz Ferdinand, began a sequence of events that by August 4 entangled most of Europe’s powers into World War I (WWI). In 1917, the USA entered the conflict, and later that year war was among the factors that brought the Communists under Lenin into power in Russia. By the time the war ended in November 1918, about 10 million fighting men had been killed--in France, a horrific 3 of every 10 between the ages of 18 and 28.

In addition to the military deaths, millions of civilians died because of the war. Even after it ended, many more millions of men and women continued to die in the chaos of the Russian Civil War and a continuing worldwide influenza pandemic, both partly due to WWI.

The Center for Disease Control (CDC) estimates those pandemic deaths at a minimum of “50 million worldwide with about 675,000 occurring in the United States,” where in the spring of 1918 it was first discovered among military personnel. The movement and dislocation of people caused by war aided its global spread. Like the war itself, the flu epidemic killed many young adults, those who before 1914 still had hopes for a brighter future.

By 1920 the world had changed greatly, especially in Europe, where so many young men lay dead. Old empires, like the Austro-Hungarian one, had disintegrated and new nations and borders sprang up. In the USA, the Republican candidate Warren Harding was elected, seeking a return to “normalcy.” “Poise has been disturbed, and nerves have been racked,” he said. What America needed was “not heroics, but healing; not nostrums, but normalcy; not revolution, but restoration . . . not submergence in internationality, but sustainment in triumphant nationality.”

And throughout the 1920s, until the Great Depression began in October 1929, many people tried to reaffirm traditional values. Prohibition began in January 1920 and lasted until 1933. Three Republican presidents dominated the decade. Refusal to join the League of Nations and isolationism characterized our foreign policy, and in the famous Scopes “monkey trial” of 1925, a high school biology teacher was found guilty of teaching Darwinian evolution instead of the biblical account of creation. But rapidly developing technology like the radio, movies, the Ford Model T, and a constant stream of other new consumer products undercut old ways. In Europe Zweig noted that “all values were changed,” and “anything that gave hope of newer and greater thrills… found a tremendous market.” In the USA, despite prohibition there were speakeasies that sold illegal liquor, and new dances that shocked traditionalists. In 1920, women across the USA for the first time were able to vote for a president. A U.S. college president expressed feelings shared by many conservative Americans when he said, “The low‑cut gowns, the rolled hose, and the short skirts were born of the Devil.”

The cataclysmic events of 1914-1919--WWI, Russian revolution and civil war, influenza epidemic, Paris Peace Conference and the treaties that resulted from it-- greatly affected the young adults who survived. This was especially true for many European veterans who served in the war--notably Hitler and Mussolini (ages 25 and 31 respectively in August 1914)--but also for some who never fought, like the American writer F. Scott Fitzgerald (only 21 when he dropped out of Princeton to join the army in 1917).

In the 1920s he and some of his fellow writers like Ernest Hemingway became known as part of the “Lost Generation.” The latter author began his The Sun Also Rises (1926) with the epigraph “You are all a lost generation.” The term suggested that because of the horrific and often pointless deaths of millions, many of the young had lost faith in abstract ideals and values like patriotism and courage. They were “lost” in being aimless, lacking purpose and drive. In his novel of WWI, A Farewell to Arms (1929), Hemingway has his protagonist Frederick Henry say that “abstract words such as glory, honor, courage or hallow were obscene.”

Europe’s writers were even more affected by the war. Some like the poet Wilfred Owen died in battle. Others, as Robert Wohl indicated in The Generation of 1914, remained “under the spell of the experience they had undergone during the critical decade between 1910 and 1920. They were never able to free themselves from the conviction, given lasting shape by the war, that they were living through an apocalypse…. They had yet to absorb what it meant to live in a society characterized by persistent rather than occasional change…. They wavered uncertainly and unpredictably between a desire to spring forward into the future and a longing to return to the hierarchies and faith of the past.”

But the past could not be brought back. The war had changed too much. Unemployment and inflation troubled many European nations, as did left-right political clashes. Unsettled conditions helped Mussolini come to power in 1922 and Hitler to attempt a takeover in Munich in 1923. Although it failed, the Great Depression aided him to become German chancellor in 1933.

Until that cataclysmic economic meltdown began in October 1929 in the United States, conditions looked rosy for many young Americans. At the beginning of 1928 Calvin Coolidge was still president, and in 1925 he had said “the chief business of the American people is business.” On January 1, 1929 The New York Times editorialized that 1928 had been a year “of unprecedented advance, of wonderful prosperity…. If there is any way of judging the future by the past, this new year will be one of felicitation and hopefulness.” Between 1921 and 1929, U. S. industrial production doubled. As compared with pre-war years, many more students were now going to college, and jobs were plentiful. In Middletown, the Lynds’ famous study of 1920s Muncie, Indiana, they indicated that while the state’s population increased only about 25 percent from 1890 to 1924, the number of those graduating from “the State University” increased almost 800 percent. In late 1929, unemployment (3.2%) and inflation (less than 1%) were still low.

But then the Depression began, and with it increased misery for many Americans, young and old alike. By 1933 the unemployment rate was 25 percent and, despite Franklin Roosevelt’s New Deal, declined only to 17 percent by 1939. Salaries also decreased for many, like professors, still lucky enough to have a job.

In Germany the unemployment rate was even higher by January 1933, which bolstered the popularity of Hitler and his Nazi party. He became chancellor of Germany at the end of that month. For the next six years he increased German armaments and made increasing demands on other countries before beginning World War II in September 1939 by invading Poland.

Finally, we have 2020 and the coronavirus pandemic, which by 15 May had sickened more than 4,431,700 million people and killed at least 303,000 people in at least 177 countries, including at least 86,700 deaths in the USA. How many more will get sick and die is anyone’s guess. Based on our past knowledge and available scientific knowledge, however, the number will be large--one reliable source in early May more than doubled its death forecast, mainly because so many states were beginning to ease social distancing and other requirements. The effects of the pandemic on numerous phases of our life are also likely to be significant. Wearing of face masks, social distancing, massive unemployment, educational and entertainment disruptions, closing of businesses, especially restaurants, an acceleration of online shopping, rethinking of the relationships between governmental bodies (at all levels) and individuals--all of these phenomena and more are now occurring. Like 1914 and 1929, 2020 will likely prove to a pivotal year for many people, young and old, around the globe.

How pivotal will depend in major ways on the results of vital U. S. elections in November. President Trump, who will be seeking reelection, is in some ways like the three Republican presidents elected in the 1920s. Like Harding, he wishes for a return to normalcy, and Trump’s “make America great again” reminds us of Harding’s call for a “triumphant nationality.” Like Coolidge, he champions business interests before those of the needy--though his demeanor is hardly like that of “silent Cal.” And like Hoover, who started off his presidency with an expanding economy and low unemployment only then to plummet into the Depression, Trump has not heretofore handled the most serious crisis of his presidency (coronavirus) well.

If the Democratic nominee (presumably Joe Biden) is elected, the pandemic, plus four years of Trumpism, is likely to spur major changes just as the Depression and four years of Herbert Hoover helped produce FDR’s New Deal. Dealing with the coronavirus, plus reversing Trump’s environmental, tax, and medical policies, might just be a start.

Newspapers and journals are full of predictions about what our future might look like. But three of the wisest commentaries come from historians and contributors to the History News Network (HNN). Ed Simon, an HNN contributing editor, states that “what happens next is unclear for all of us, and he quotes historian Rebecca Spang’s “The Revolution Is Under Way Already” (in The Atlantic): “everything is up for grabs.” Historian Steve Hochstadt, also on HNN, writes “as for what that future will be like, at the moment I haven’t a clue.” But like Simon and Sprang he asserts, “we, men and women, can influence how we come out of this chaos.” How we vote in November will dramatically impact that “how”--and all of our futures.