COVID-19 and the White Horse Prophecy: The Theology of Ammon Bundy

Betsy Gaines Quammen is a historian and conservationist, and the author of American Zion: Cliven Bundy, God and Public Lands in the West. 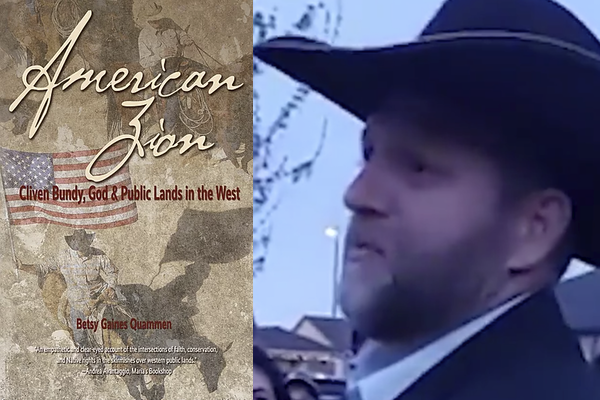 We are all now stuck within the procession of pandemic, left to view its spectacle through a kaleidoscope of cultural, philosophical, religious and biological understandings. Most Americans have responded to the spread of COVID-19 like much of the rest of the world—with unease, grief, fear, compliance and endurance. We’ve isolated and we’ve hunkered. But not all of us. What makes the US singular in the world are the rebellions springing up to protest stay-at-home orders put into place to protect us from the unspooling spread of disease. Agitators against such orders range from Ammon Bundy and his supporters in Idaho and Utah to various armed militia groups, like the Proud Boys in Michigan. Many protestors believe restrictions are noxious violations of liberty that keep us from barbershops, bars, diners and our jobs. Others believe that the disease is a ploy with an ultimate goal to steal away rights. And then there are some inclined to believe in religious prophecy amidst pestilence; as in God setting the stage for big, transformative action—think the Book of Revelation.  Bundy believes all of this.

An urgent source of inspiration in all of Bundy’s rebellion is a murky piece of Mormon apocrypha known as the White Horse Prophecy. This historical hangover helps explain his resistance to social-distancing constraints amid a pandemic: He’s drawn to the image of the White Horse in a final defense of the United States Constitution. His agitation is a religious rite inspired by the first prophet of his religion, Joseph Smith, the founder of the Church of Jesus Christ of Latter-day Saints. Bundy has said, regarding his ongoing anti-government rebellion, “that our Constitution was being violated. That it was hanging by a thread”—a clear allusion to the language of the White Horse Prophecy.

The White Horse Prophecy was supposedly uttered by Mormon prophet Joseph Smith in 1843 to two witnesses, Theodore Turley and Edwin Rushton. Rushton, who was eighteen at the time, recollected their conversation in a reminiscence likely scribbled long after Smith’s 1844 murder.  In a twelve-page, undated testimony, Rushton wrote that Smith had said,

And you will See the Constitusion [sic] of the United States almost Destroyed so that it will only be saved as it where by a thread, and that thred as fine as the finest silk fiber, at this Point the Prophet countainence [sic]became Sullen for he Loved the Constitution, he said it was made By the Inspireration [sic] of God and it would be Saved By the White Horse and red Horse Combined In its defence, [sic].

Rushton’s account plays on the Book of Revelation, the final book of the bible, which tells of four horsemen riding white, red, black, and pale steeds. The colors of these horses correspond respectively with Christ, bloodshed, famine, and death. The relevant passage, from Revelation 19: 11-14, reads:

And I saw heaven opened, and behold a white horse; and he that sat upon him was called Faithful and True, and in righteousness he doth judge and make war. His eyes were as a flame of fire, and on his head were many crowns … and his name is called The Word of God. And the armies which were in heaven followed him upon white horses, clothed in fine linen, white and clean.”

In Rushton’s version of Smith’s prophecy, the Mormon people are the White Horse, the army of God.

Beginning in the early twentieth century, when a Mormon missionary learned of Rushton’s old account and began to circulate it among other church members, officials challenged its credibility and denied the prophecy was ever uttered by Smith. Addressing the White Horse legend, in 1908, Joseph Fielding Smith, then President and Prophet of the Church, and the first prophet’s nephew, stated, “My brethren and sisters, if you understand the Church articles and covenants, if you will read the scriptures and become familiar with those things which are recorded in the revelations from the Lord, it will not be necessary for you to ask any questions in regard to the authenticity or otherwise of any purported revelation, vision, or manifestation that proceeds out of darkness, concocted in some corner, surreptitiously presented, and not coming through the proper channels of the Church.” In other words, the White Horse Prophecy had no place in official Church scripture.

All the same, in his lifetime Joseph Smith did have grand ideas about the Constitution and its relationship with his Latter-day Saints (LDS). Throughout his tenure as prophet, he contended that he and his brethren were not afforded the right to safely practice religion as promised by the First Amendment. While living in Illinois, he raised an army, the Nauvoo Legion, and imagined a day when the Mormon people would go to battle to protect themselves and, in doing so, save the Constitution. In 1840, he wrote,

The White Horse Prophecy may have been fabricated, but Rushton’s account echoes Smith’s genuine prognostications.

Ammon Bundy has been casting about for a new crusade since the end of his 41-day armed 2016 takeover of Oregon’s Malheur Wildlife Refuge; a siege that combined military tactics with religious ritual, in objection to alleged constitutional struggles over public land use. At the time, the Mormon Church condemned Bundy’s actions and issued a statement saying, “while the disagreement occurring in Oregon about the use of federal lands is not a Church matter, Church leaders strongly condemn the armed seizure of the facility and are deeply troubled by the reports that those who have seized the facility suggest that they are doing so based on scriptural principles. This armed occupation can in no way be justified on a scriptural basis.”

Since mid-March, Bundy, who now lives in Idaho, has flouted that state’s stay-at-home order. He’s called for large gatherings, such as an Easter Service in a warehouse in the town of Emmett, for which he projected a thousand person turnout (but in the end only attracted about forty people). The Mormon Church, on the other hand, closed public worship services on March 12, one factor which may help account for Utah’s low COVID-19 case rate. A week after Easter, Bundy was involved in a protest over public park closures in Meridian, Idaho. A local woman named Sara Brady brought her children onto a closed playground and refused to leave after law enforcement repeatedly warned her. She was finally arrested. That evening, Bundy joined dozens of people in front of the arresting officer’s house. Bundy was filmedbrandishing his pocket Constitution, waving it the faces of Idaho law enforcement, then “serving papers” on behalf of what he called “We the People” upon the officer, in response to Brady’s arrest. Brady has tried to distance herself from Bundy, while he continues to organize marches protesting the shutdown. On social media, he’s encouraging others who are doing the same.

In spite of the Church’s efforts to repudiate the White Horse Prophecy, as late as 2010 the Church newsroom issued a statement, “The so-called ‘White Horse Prophecy’ is based on accounts that have not been substantiated by historical research and not embraced by Church Doctrine.” This came after an Idaho gubernatorial candidate, Rex Rammell, also LDS, wrote a letter to a Spokane newspaper, the Spokesmen Review, entitled “The Constitution will hang by a thread.” Rammell announced private meetings to examine “Joseph Smith's [White Horse] prophecy with people who believe he was a prophet,” in order to understand how the prophecy related to his own candidacy.

In 2019, Tim Egan, of The New York Times, speculated about Mitt Romney voting to impeach Donald Trump as a Constitution rescuing act, in fulfillment of the White Horse Prophecy. This led to a lament in The Salt Lake Tribune by Clifton Jolley, who wrote, “Just when most of us were hoping not to remember — much less dispute — the White Horse Prophecy, The New York Times pipes up with what sounds like a modernization of Mormon folklore: that one day the Constitution would be saved by Mormons.”

The White Horse Prophecy, whether uttered by Smith or not, plays large in certain corners of Mormon and American culture, among people who yearn for latter days and the events that are portended. And here we are: There is no arguing that this pandemic has a biblical vibe. We are living in an unprecedented time when reliable information is scant and conspiracy theories about this disease are rife. Maybe such theories are even comforting to some—those who want to believe that these dire events are all meant to be. It’s not shocking that religious prophecy is getting woven into the weftof our unfolding reaction to contagion. Things do seem prophetic if you are inclined to see the world that way.

Rushton’s account of what Joseph Smith supposedly said reflects both the white horse trope in Revelation and the political views and sentiments at the time that he wrote it. Oddly, given the starting point of this current outbreak, China is even mentioned in the Rushton account. As our Constitution dangles, he wrote, the West will be “invaded by the heathen Chinese unless great care and protection be given.” Among the conspiracy-minded, enflamed by recent comments from the current administration calling coronavirus the “Chinese virus,” the prophecy could further suggest this type of predicted invasion. But what the reference to China really underscores, heartbreakingly, is a xenophobia of nineteenth century America still appears to be very much ingrained today.

It’s difficult to know just what else Ammon Bundy and his followers might presently see amid prophecy, pestilence, and constitutional peril. In a country with segments of people who deny science, act on revelation, see regular events as either conspiratorial or supernatural, COVID-19 offers a platform for misinformation and agitation. As Bundy has said over and over, God calls on him to act. At a time when it might feel as though God is both doling out reckoning and expecting great action, Bundy calls his followers to gather together in large groups and protect the Constitution. It recalls another familiar passage from Revelation, in 6:8, reading:

And I looked, and behold a pale horse: and his name that sat on him was Death.

There is a danger that, in his actions amid this pandemic, Ammon Bundy embodies not the white horse, but the pale one.