The Second Battle of Gettysburg: Eisenhower’s Fight with the 1918 Flu Pandemic 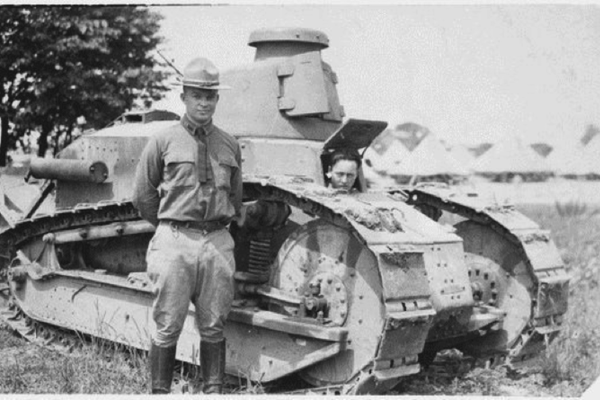 In 1918, Dwight D. Eisenhower, while in command of the Tank Corps at Camp Colt in Gettysburg, PA, played a key role in the US Army’s fight with the 1918 influenza pandemic that ravaged US troops near the end of World War I.   Before the pandemic ran its course, the 1918 flu killed almost as many American soldiers as died in battle during Europe’s savage war.  While the deaths of young soldiers at Camp Colt were staggering, Eisenhower and the Army believed that his command had significantly mitigated losses in his crowded training camp.   Eisenhower’s plan for controlling the flu epidemic at Camp Colt helped establish health care protocols later adopted by the US. Army.

Despite his hope to command troops in World War I, Dwight D. Eisenhower, two years out of West Point, was saddled with training raw troops.   In the winter of 1917, the Army assigned him to Camp Meade, Maryland to help the 301st Tank Battalion prepare for deployment to France.  Men in the tank battalion considered themselves an elite corps whose tanks would play a decisive role in winning the war.  Initially, Captain Eisenhower believed he would command the battalion in Europe.  His dreams collapsed, however, when his superior Colonel Welborn decided that Eisenhower was too valuable as a trainer to be sent off to war.  Instead, in March 1918 Ike was dispatched to Camp Colt at Gettysburg, Pennsylvania, to establish the Army’s Tank Corps training and marshaling center.

Under Eisenhower, Camp Colt ballooned from a minor post of 1000 soldiers to a major tank-training center of just under 11,000 men. The assignment was bittersweet. Although he was not leading troops in battle, his wife Mamie and son Icky were able to join him in Gettysburg where for the first time they enjoyed normal family housing.  Welborn also softened Eisenhower’s disappointment by sponsoring his promotion to Major (temporary) and then on his birthday to Lieutenant Colonel (temporary) making the 28 year-old Eisenhower among the youngest Lieutenant Colonels in the Army.  Eisenhower continued to hope for a chance to command troops in Europe.

For millennia, hundreds of thousands of ducks and geese had darkened the skies over western Kansas during their migrations along the Central Flyway to and from Canada and the Gulf of Mexico.  This feathered cloud also rained billions of bird viruses in their poo on Kansas farms, towns, fields, ponds and pig wallows along their migration route. Evidently, sometime during the 1917 fall migration, mutating bird virus infected pigs who in turn sickened Kansas farmers.  In early February, 1918 a country physician west of Dodge City noted a dramatic uptick of influenza cases of an unusually virulent nature.  Young, healthy patients were struck down quickly, many of them dying.  Soon, area doctors were swamped with sick and dying flu patients.  Then, as suddenly as the influenza storm began, in March the epidemic was over.  Schools and businesses reopened; life seemed to return to normal.

In the Spring of 1918, Kansans were more concerned about winning the war in Europe than in combatting a flu epidemic at home.  Men entrained in Dodge City for a cross-state trip to Camp Funston at Ft. Riley where they received basic training in the Army before shipment to the trenches in Europe.  Apparently, some of the recruits arrived at Camp Funston carrying the flu virus.  On March 4, a camp cook fell ill.  In the following three weeks, about 1100 soldiers were hospitalized with the flu; thousands more sought relief in the infirmary; 38 soldiers died.  The number was high, but not high enough to cause alarm.

After American soldiers from Camp Funston, some infected with the influenza virus, disembarked in France, they awaited battlefield assignment in a crowded marshalling area near the port of Boulogne.  There fresh troops from the United States mixed with wounded, sick, resting and transient British soldiers.  The camp was rife with diseases of all sorts.  Whether British troops heading for the front were infected with the flu by Camp Funston Americans or whether they picked up a different strain of virus, or both,  the H1N1 virus first exploded on the British front, crossed easily through German lines, and rapidly felled soldiers up and down the front.  Concurrently, flu also overran Spain and then spread throughout Europe.   In this first wave, millions suffered, but comparatively few died.  That was about to change.

The 1918 flu epidemic waned the first of August.  And then all hell broke loose.  Somewhere, somehow, the virus mutated into a killer.  By late August 1918, the second wave of flu hit widely scattered Atlantic ports, including Boston’s crowded piers.  Thereafter, influenza quickly spread northwest of Boston to Fort Devens crammed with 45,000 transient troops.   Inevitably, on September 8 Fort Devens reported its first case.   Shortly thereafter, a shipment of draftees from Ft. Devens arrived at Camp Colt with many of the men feeling “achy” or suffering headaches.  Because they had received typhoid fever shots before embarking for Camp Colt, the doctors presumed the draftees would feel better in the morning.  By daybreak, however hundreds of soldiers were ill---and within a week almost 1/3 of the camp became sick; ultimately 175 men died during that first week.

Although preparing the Tank Corps for war had been demanding, Eisenhower’s most terrifying and complicated challenge during World War I was fighting the second wave of the 1918 Influenza Pandemic that engulfed Camp Colt.  Responding to this medical crisis, Eisenhower’s extraordinary skills as a military manager matured.  Characteristically, he went all out to fight the flu virus, meeting the emergency with firmness and innovation. First, he did not meddle with the medical staff, but placed full confidence in his chief surgeon Lt. Colonel Thomas Scott of the Oklahoma National Guard.  Eisenhower authorized the doctors to employ all known remedies to curtail the epidemic.  Assuming that the entire camp had been exposed to the flu, he ordered tents be set up across the Gettysburg battlefield, assigning three men to each tent but limiting tent occupancy to four.  Troopers known to be exposed to the virus were isolated as best as possible, although in some cases only canvas partitions separated beds.   The most serious patients were housed in Xavier Hall adjacent to St. Francis Xavier Catholic Church on High Street.  Eisenhower quarantined the entire base, placing MPs on guard to prevent unauthorized departure from camp.  In addition to quarantine, Eisenhower directed that all personnel receive inoculations for smallpox and typhoid fever and that each soldier receive a daily medical examination.  When possible, tent flaps were opened and bedding aired.   Orderlies swabbed the floors daily with sterilizers and kerosene.  At Scott’s recommendation, Eisenhower also authorized use of experimental treatments in the camp, among his headquarters staff and on his family.

Of Scott’s experimental medications, Eisenhower noted, “Each morning [the doctor] would use two sprays on the throat and nostrils….   One of them was intensely pungent and strong.  On application, I felt as if the top of my head was going off.”   The second, apparently, was intended to buffer the first.  The doctor insisted in treating Eisenhower’s staff and family twice a day.  They were fortunate—no one on Eisenhower’s immediate staff or family contracted the flu.

Finally, Eisenhower initiated an enlightened strategy authorizing military doctors to treat civilians in Gettysburg as well as to cooperate with hospitals, churches and local authorities in town.  Whether he was moved by common sense, compassion, or public relations, Eisenhower understood that, given limited resources, it was best that the military and civilians coordinate efforts as closely as possible.  For the second time in less than 60 years, Gettysburg College, and local school and church buildings were converted to hospitals to care for the stricken and deathly ill.   Because there were few coffins available and no immediate burial ground, the dead were dispatched to a storage tent that served as a make-shift morgue.

Fortunately, the crisis passed almost as quickly as it had arrived.  Within a week, the dying at Camp Colt ended and with it the influenza scare passed, leaving in its wake a shaken Eisenhower.   Before the epidemic ran its course in November, the 1918 Influenza Pandemic killed almost as many American soldiers (c52,000) as died in battle in World War I (c53,400). Eisenhower had been desperately worried that Mamie or Icky might be stricken with the flu.  Fortunately, his headquarters staff was spared, in part because of Dr. Scott’s diligent sanitation efforts.  Before it was over, the pandemic claimed about 675,000 Americans.

Camp Colt’s relative success in fighting the flu epidemic did not go unnoticed by the War Department.   When the crisis eased in Gettysburg, the War Department transferred thirty doctors from Camp Colt to provide instruction on exactly how Eisenhower’s command had coped with the epidemic.  Although he was noticeably successful in fighting the flu. never again would Eisenhower lose as many men under his direct command as he did that ghastly fall in Gettysburg.   Thereafter, after he had been reduced to his permanent rank as major, Eisenhower was awarded the Distinguished Service Medal for meritorious service at Camp Colt, the Army’s highest peacetime decoration usually given to generals and colonels but not to those who had served temporarily as lieutenant colonels.  A half century later in his memoir At Ease, Stories I Tell to Friends, former President Eisenhower vividly recalled his harrowing fight against disease and death during the Second Battle of Gettysburg.  To date, there is no monument on the Gettysburg Battlefield commemorating Eisenhower’s extraordinary stand against the 1918 Influenza Pandemic.