Trump Is Not Fighting Science, He’s Stealing Its Authority 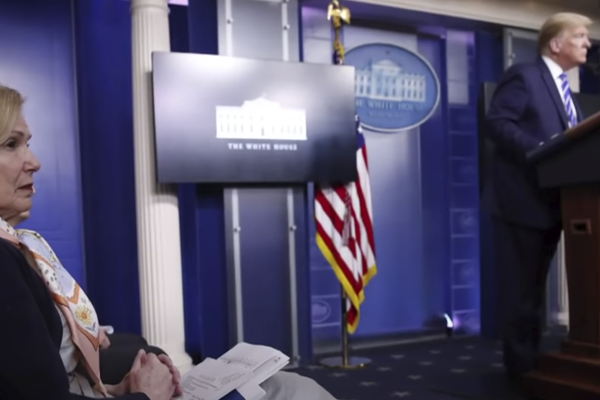 If it were still just reality TV, it might be funny. In his discussions of coronavirus, President Trump has veered between spouting wildly inaccurate statements and making claims of super-human knowledge. It is tempting to accuse Trump of being anti-science, but as the history of American creationism shows, Trump is doing something else, something much more dangerous.

It’s not that President Trump is fond of traditional mainstream scientific expertise. Even Trump’s biggest fans might agree that the President does not follow the rules of mainstream scientific thinking. In the face of scientific fact, President Trump has claimed that coronavirus will “miraculously” disappear in warmer weather. He has implied that antibiotics have something to do with viruses. He has claimed an ability to make life-or-death public health decisions based on his superior mental abilities, using the “metrics” in his head instead of the usual data. Perhaps most strangely of all, President Trump has suggested absurd remedies such as blasting victims with ultraviolet light and subjecting them to injections of “the disinfectant.”

Nothing illustrates this distinction better than America’s long-running battle over the science of evolution. For over a century now, creationists have confounded Americans’ scientific knowledge of evolution by claiming to have better science on their side. Creationists have hardly ever attacked science itself. Rather, they have insisted that their religious ideas have given them better science.

Nearly a century ago, for example, in the lead-up to the infamous 1925 Scopes “Monkey” Trial in Tennessee, celebrity prosecutor William Jennings Bryan insisted that his creationism made him a superior scientist. In 1921, Bryan attacked the science of Darwinism as nothing but an “absurd hypothesis.” Unlike real science, Bryan insisted, which is built on facts, Darwinian evolution was only a string of guesses held together by bitterness and atheism.

A generation later, creationists such as Bernard Ramm continued the fight. Like Bryan’s crusade, Ramm’s campaign was not a fight against science, but rather a struggle to define science. As Ramm put it in 1954, science only has a chance at explaining the realities of life if it is infused with “the light of revelation.” The pretenders to modern science, Ramm argued, had foolishly abandoned the vital questions of first cause and final goals. Only a real science based in true religion had a chance to answer the big questions.

In the 21st century, even the most radical creationists fight for science, not against it. For example, when arch-creationist Ken Ham debated Science Guy Bill Nye in 2014, Ham did not say he opposed science. As Ham argued in his opening statement, “the word ‘science’ has been hijacked by secularists.” Like generations of creationists before him, Ham wanted to take back science. Ham tried to make a distinction—a distinction recognized by no mainstream scientists—between authentic “observational” science and false “historical” science. For Ham, real science could only make claims based on what it directly observed, not on evidence left behind from millions of years of evolution.

Creationists’ long battle to call their religious ideas “Science” has direct and damaging policy implications. Having failed in their attempts to push creationism into public-school science classes, creationists these days try to water down the kinds of science schools will include. In the past decade, creationist lawmakers have introduced dozens of “academic freedom” bills in state legislatures. These bills often call for science teachers to teach “the full range of scientific views regarding biological and chemical evolution.” The range of views taught would presumably include the mainstream science of evolution along with religion-friendly ideas such as intelligent design.

These bills do not claim to fight against science. If they did, they would lose. Few parents want their children to miss out on learning about science. Instead, these bills confuse and distort the issue by pretending that non-mainstream views about evolution have equal intellectual credibility. They insist that their religious views have earned scientific legitimacy. As have creationists for over a century, today’s activists fight for science, for the right to call their ideas truly scientific. Then they offer those ideas to public schools as better science.

Trump is doing something similar and similarly harmful. When President Trump says his decisions will be based on a “hunch,” he is repeating the tactics of generations of creationists. It might sound at first like he is rejecting the need for scientific credentials or expertise. In fact, though, Trump is positioning himself as superior to those experts, not against them. Like creationists, Trump does not deride the authority of science itself. Instead, he portrays himself as the best arbiter of the meaning of scientific details, the perspicacious decider-in-chief.

For instance, just after his pronouncement that he had a “hunch” about the true nature of coronavirus, Trump explained that his hunch was

based on a lot of conversations with a lot of people that do this, because a lot of people will have this, and it's very mild. They will get better very rapidly. They don't even see a doctor.

Concealed within Trump’s ramblings is a claim to know science better than experts, better than “a lot of people that do this.” Similarly, when Trump announced that he will make decisions about re-opening society based on the “metrics” in his head, it might sound as if he is throwing out the need for consultations with real scientists. But that’s not what Trump was saying. As Trump continued,

I can listen to thirty-five people. At the end, I gotta make a decision.

Even if “thirty-five” scientists make their best cases, in other words, they still need someone like Trump to figure out the truth behind their claims.

Trump’s statements make for terrible science, but they are not anti-science. An anti-science approach would dispute the validity of careful evidence, expert review, and cautious claims. Trump does not dispute science; he only disrupts science and makes the communication of scientific information far more difficult. By standing athwart the scientific process and shouting “Look at me,” Trump’s antics are far worse than if he were merely anti-science. As mainstream scientists and public-health experts do their best to communicate evidence-based information to the public, Trump is getting in their way. He is mixing good science with bad, diluting evidence-based facts with personal fantasies and magical thinking. Worst of all, Trump is claiming the ability to choose between and among scientific evidence and scientific experts to find the real truth.

If Trump mocked Science, very few people would listen. But when he insists that he has a better, more authentic Science on his side—one based only on his own superior charisma and powers of discernment—he has a much better chance to keep people’s attention. Instead of communicating a clear, unified message about current best knowledge and best practices, Trump’s fantasy science makes the coronavirus crisis far more dangerous.