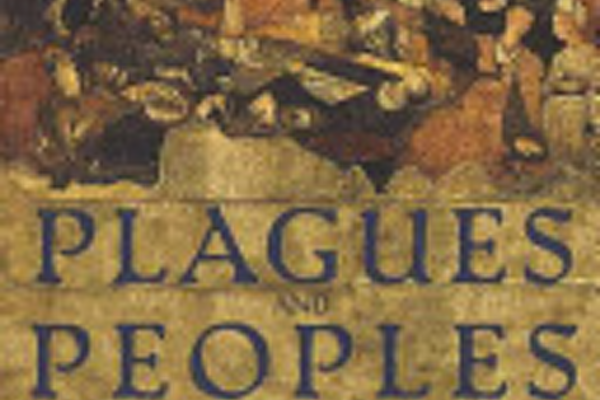 William McNeill, the eminent University of Chicago historian, won a National Book Award for his first book, Rise of the West in 1964. But it his second book, Plagues and Peoples, published in 1975 that many readers today will find eerily prophetic.

Summarizing his research in the last pages of the book, he observed that while 20th century medicine had effectively controlled a number of deadly diseases (e.g. smallpox, polio), world leaders had grown complacent and the resulting surge in world population had created an “extraordinary ecological upheaval.”

He warned readers that “infectious disease which antedated the emergence of humankind will last as long as humanity itself… and will remain… one of the fundamental determinants of human history.”

He even pinpointed the most likely cause of the next pandemic: a mutated form of the influenza virus. He noted that the influenza virus was not only highly infectious, but “is unstable and alters details of its chemical structure at frequent intervals,” which prevents humanity from acquiring any long-term immunity. Thus, human populations are dependent upon researchers continually developing new influenza vaccines which must be mass produced in a hurry.

McNeil’s major achievement in Plagues and Peoples was to incorporate developments in microbiology, anthropology and archeology, fields usually operating in silos, and synthesize them in a popular world history, the first nonfiction book that identified disease as a primary shaper of world history.  Although McNeill’s research was conducted six decades ago—in an era before personal computers, DNA sequencing and the discovery of the Lucy skeleton—many of his conclusions remain valid and seem all the more prescient.

One of McNeill’s insights in Plagues was to describe the relationship between “microparasites” (e.g. bacteria, viruses) and “macroparasites” (e.g. rats, humans) which exist in a constantly evolving relationship. McNeill theorized that humankind itself was a type of disease or microparasite on its host, the Earth. He warned that if humans put too great a stress on that host, it could self-destruct. Indeed, McNeill formed this hypothesis, which presages arguments about climate change, in the early 1970s, when the concern about rising greenhouse gases was limited to climatologists.

Before McNeill’s book, many sweeping or synthetic histories of western civilization were based on political or social movements or used the Great Man theory to explain rise and fall of empires. Epidemics were seen as trivial episodes compared with military battles or charismatic monarchs. Perhaps this reflected the 20th century vantage point of many historians. In a 2010  magazine profile of McNeil, Dr. Donald Hopkins, of the Carter Center in Atlanta, observed that with smallpox, polio and other diseases virtually eradicated, “it was part of the hubris of the late 20th century to say we’d taken care of infectious diseases… we’ve got them under control.”

McNeill, who died in 2016 at age 97, recounted in the introduction to Plagues how he conceived of the book’s central thesis. He was deep into researching The Rise of the West when he read an account of how Hernan Cortez and his small band of Spanish warriors conquered the Aztec Empire.  The Aztecs were skilled warriors who had beaten the Spanish in an initial battle, but when the Cortez returned four months later, he faced no opposition; smallpox had wiped out half the population and most of the Aztec leadership.

Since the “entire history of the new world hinged on Cortez’s gamble” and the Spaniards’ group immunity to the new epidemic, McNeill decided to research the role of disease in the collapse of other civilizations. His book went on to correlate Sparta’s defeat of Athens, the decline of the Roman Empire and the fall of the Han dynasty to populations decimated by epidemics.

Plagues and Peoples was published to positive reviews and major sales. It has been in print ever since and has led to many other books incorporating biological interpretations of world history such as Jared Diamond’s widely read 1997 book, Guns, Germs, and Steel (In the New York Review of Books, McNeil praised Diamond’s book but questioned his emphasis on technology over human agency).

While McNeill was a historian capable of great conceptual leaps, he did not work in isolation, he was influenced by two historians who preceded him.

As an undergraduate at the University of Chicago, he had immersed himself in the first three volumes of A Study of History by  Arnold J. Toynbee. Toynbee, a professor of international history at the London School of Economics, argued that all civilizations rose and fell in cyclical patterns. For example, he drew parallels, between fifth-century Greece and the early 20th century. Toynbee’s work eventually spanned 12 volumes and looked at patterns of success and failure in 28 separate civilizations.

McNeill also read Hans Zinsser’s Rats, Lice and History, published in 1935.  Zinsser was a microbiologist at Harvard University and his book (as the title indicates) focused on epidemics of typhus and bubonic plague, both spread by lice. Zinsser’s book was based on the science of epidemiology but written in a witty, picaresque style. One chapter was titled, “On the louse: we are now ready to consider the environment which helped to form the character of our subject.”

William McNeill went on to author a total of 23 books including The Pursuit of Power: Technology, Armed Force, and Society since A.D. 1000, Arnold J. Toynbee: A Life, and The Human Web: A Bird's-Eye View of World History, the latter co-authored with his son,  J. R. McNeill, a professor of environmental history at Georgetown University.

It is interesting to speculate what William McNeill would have thought of our current coronavirus epidemic. One thing is certain: he would not have been surprised. As he warned in Plagues and Peoples, humankind remains susceptible to epidemics and the constantly mutating flu virus is most likely threat.

In a later work he suggested that there might be a law of “conservation of catastrophe,” under which each successful civilization adapts itself to one or more disasters. This gives the leaders a false sense of security, but also raises the probability that a new, unforeseen ecological disaster would destabilize it.

McNeill was, however, optimistic overall about mankind’s ability to adapt. In The Rise of the West he said that human intelligence has proven again and again that it capable of overcoming catastrophe. He added that “in human society… belief matters most” and that the values and stories we employ to make sense of life are “often self-validating.”