Does Lincoln or Trump Represent the Conscience of the Republican Party?

Richard Striner, a professor of history at Washington College, is the author of many books including Father Abraham: Lincoln’s Relentless Struggle to End Slavery and Lincoln’s Way: How Six Great Presidents Created American Power. His latest book, Summoned to Glory: The Audacious Life of Abraham Lincoln, will be published in June 2020. 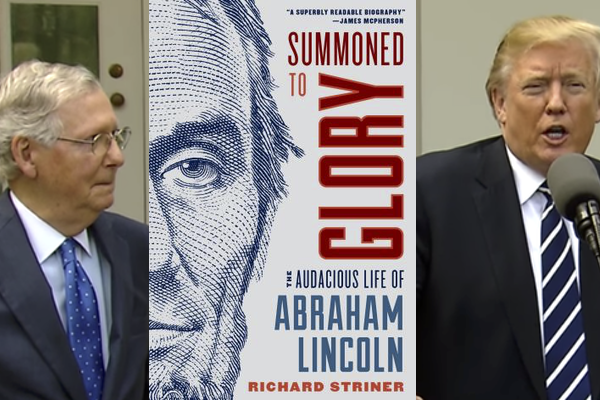 Are we headed for another Civil War?

The idea might seem hard to imagine for a great many obvious reasons, and the prospect is easy to deride. And yet the years in which the “blues” and “greys” went to war can shed light upon America now. The comparison troubled me as I composed my new Lincoln biography, Summoned to Glory. It is hard to ponder Lincoln’s life and times without contemplating the condition of America today: divided, enraged, and almost coming apart at the seams.

From the founding of the party through the end of the Civil War, the issue of slavery was paramount for Republicans, in spite of the diversity of motivations within their ranks. The party unified around the principle of outright emancipation by 1865 under Lincoln’s leadership. And Lincoln saw the issue as a commentary on the best and the worst of human nature--nothing less. “Slavery,” he proclaimed in 1854, “is founded in the selfishness of man’s nature, opposition to it in his love of justice. Those principles are an eternal antagonism.”

At the heart of Lincoln’s creed was the principle of egalitarian decency: the principle articulated by Jefferson in the Declaration of Independence. Lincoln urged Americans to rededicate themselves to that creed--the nation’s founding creed--and he said this again and again in the years leading up to the war. The war itself was a test to determine whether any nation so conceived and so dedicated could long endure.

He said this, of course, in the Gettysburg Address, and the words of that speech are quite famous. But he made the same point in much sharper language in the course of an earlier speech--one that he delivered on August 17, 1858 in his campaign against Stephen Douglas.

The Founding Fathers, said Lincoln, believed that nothing “stamped with the divine image and likeness” was meant to be “trodden on, and degraded, and imbruted by its fellows.” So they “erected a beacon to guide their children, and their children’s children.” They “knew the tendency of prosperity to breed tyrants, and so they established these great self-evident truths, that when in the distant future some man, some faction, some interest, should set up the doctrine that none but rich men, or none but white men, or none but Anglo-Saxon white men, were entitled to life, liberty, and the pursuit of happiness, their posterity might look up again to the Declaration of Independence and take courage to renew the battle… so that truth, and justice, and mercy… might not be extinguished from the land.”

That quotation makes poignant reading when today’s Republican Party is led by a man who takes pleasure in degrading and “imbruting” whole classes of people who, in his view, are human “scum.”

As for the proposition that only rich men, or white men, or Anglo-Saxon white men deserve life, liberty, and the pursuit of happiness, consider Trump’s actions toward Latin Americans who come here seeking those things. He wants to treat them like animals.

He vilifies undocumented immigrants at every opportunity and comes close to calling them subhuman. He even vilifies Americans who ask for humanitarian assistance--like the victims of the hurricane in Puerto Rico--if they happen to be people of color.

Lincoln was opposed to the “Know Nothings” who were trying to restrict immigration. He supported opportunity for all. Compare the position of Lincoln with the current Republican immigration policy, which actively frowns upon the pursuit of happiness by anyone who comes as a refugee to these shores unless they happen to be… whites. That was the gist of Trump’s reported remarks when he said that new immigrants ought to come from places like Norway instead of from . . . Africa or from “shithole” nations like Haiti.

Trump denies that he said this. But participants in the meeting in question insist that he did. And such sentiments are perfectly consistent with the public behavior that Trump displays all the time. His bigotry cannot be contained because it flows from the impulse that makes Donald Trump Donald Trump.

He likes to hurt and humiliate anyone he thinks is “beneath” him. Lincoln’s politics emphasized decency. Trump doesn’t know the meaning of the term.

Imagine the exercise of reciting Lincoln’s words in the presence of Trump:  nothing made in God’s image should be “trodden on, and degraded, and imbruted by its fellows.”  Would he pause long enough — in his tweeting of insults — to listen?  And even if he did pay attention to the words (presuming he understood them) what would he say?

We can easily imagine what Donald Trump would say.

And we can easily imagine the responses of Mitch McConnell, Lindsey Graham, and all the other Republican worshippers of power who avert their eyes from Trump’s deeds or else think up ways to excuse them.

Compare Lincoln’s politics to those of Donald Trump and you will see how far downhill the Republican Party has come. Abuse and degradation now flow from the party of Lincoln. The “better angels of our nature” are unknown in the party today. Republicans in Lincoln’s day insisted that the moral issue dividing the nation should be settled in favor of common decency before the country could unite. Common decency and American unity could not be farther away from the minds of Trump and his supporters.

Trump’s Republican Party pushes endless division and, rather than fostering a decent re-unification with an emphasis on mutual respect and common decency, the party sinks our country ever downward. Before very long, we may be mauling one another in the dark.

Scores of decent Republicans recoiled when Trump succeeded in his quest for the Republican nomination in 2016. “Anyone but Trump” was their slogan and some of them left the Republican Party. As the bestiality of Trump’s administration took shape, some Republicans like Jeff Flake and Bob Corker retired from Congress and indeed from politics in revulsion against what was happening.

But Trump’s steady quest for absolute power has proceeded, and only one lone Republican senator--Mitt Romney, the party’s 2012 presidential nominee--had the courage to take a stand in the Senate impeachment trial. All the others went along like sheep, either bleating out pathetic excuses or else remaining silent. They refused to hear the sworn testimony of witnesses. Several of them—Lamar Alexander and Pat Roberts, for instance—were retiring, so this was their now-or-never moment to consider their own place in history.

They took the coward’s way out.

Perhaps they’re just tired old men. But Trump is quite old and yet he never seems to get tired. Perhaps they simply haven’t the stomach any longer for continued… “unpleasantness.” But that’s a justification that anyone can use—it’s something that anyone can say to themselves—if they decide to give up and let a brutal thug have his way.

Roberts chairs the Dwight D. Eisenhower Memorial Commission, which seeks to honor another Republican exemplar of decency. The connection between Roberts and Eisenhower and Trump is fraught with irony—to put it mildly. Eisenhower worked behind the scenes to defeat a demagogue who was just as vile as Trump:  Joe McCarthy. It bears noting that Trump learned the arts of demagoguery from none other than McCarthy’s top henchman Roy Cohn.

It is sad to anticipate the cant that Pat Roberts will probably intone when the Eisenhower memorial is dedicated. How can he live with himself after failing to take a stand when he had the opportunity? Perhaps he said to himself, “what good would it do if I took a stand—no one would listen.” Well, if others had followed the lead of Mitt Romney, who can say what events might have followed?  It might have triggered a catharsis.

If someone in the future writes a book like John F. Kennedy’s Profiles in Courage, Mitt Romney will be in it and Pat Roberts will not.

Theodore Roosevelt had a pithy way of describing defeatists. In his language of robust and swashbuckling action, he would probably say that the equivocal Republicans of today have a “yellow streak.”  Lincoln had something more exalted to say to the Republican Congress in 1862:  “Fellow citizens, we cannot escape history.... The fiery trial through which we pass, will light us down, in honor or dishonor, to the latest generation.”

Republicans:  you have drifted away from noble origins that would be the envy of any political party. You have cut yourselves off from a heritage of altruism and benevolence to obey the commands of a brute—a leader who, like his idol Mr. Putin, believes in nothing whatsoever but the grubby acquisitions that plunder can deliver into his foul and selfish little hands.

Awaken, Republicans, and make some effort to reflect!  If you value any principle, prove it by your words and your deeds. Prove to yourselves and to the world that there is more to life than raw power.