Charles J. Holden, Zach Messitte, and Jerald Podair are the co-authors of Republican Populist: Spiro Agnew and the Origins of Donald Trump’s America, published by the University of Virginia Press. Charles J. Holden is a professor of History at St. Mary’s College of Maryland. Zach Messitte is the president of Ripon College.  Jerald Podair is a professor of History and the Robert French Professor of American Studies at Lawrence University. 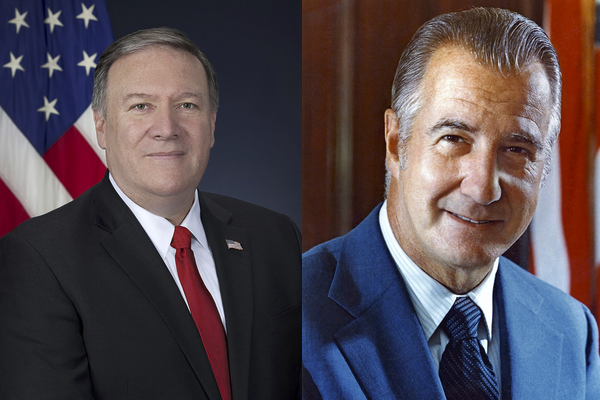 Secretary of State Mike Pompeo’s expletive-laden dust-up with NPR reporter Mary Louise Kelly is on message for the Trump-led Republican Party. Complaining that Kelly’s question about Ukraine was “another example of how unhinged the media has become in its quest to hurt President Trump and this Administration,” Pompeo has rallied the Republican base by slamming a journalist doing her job.

Whether he knows it or not, Pompeo is drawing from a playbook written a half century ago and perfected by a politician once voted the worst vice president in American history. Secretary Mike Pompeo, meet Vice President Spiro Agnew.

A product of the Baltimore suburbs, Agnew was Richard Nixon’s poster boy for the Silent Majority, drawing votes from the suburbs, border states, and reaching into the ranks of George Wallace’s southland. Compared to Pompeo--who graduated first in his West Point class, went to Harvard Law School, and made a fortune in the aerospace industry before being elected to Congress from Kansas--Agnew’s background was more modest.

After failing out of Johns Hopkins, Agnew joined the Army and served with distinction in World War II. The future Vice President returned from Europe and finally earned his combined undergraduate and law degree at the University of Baltimore, a then-unaccredited night school.

Agnew next held a series of minor law jobs in Towson, Maryland. His anonymous suburban life included the local PTA, Reader’s Digest, and watching the Baltimore Colts on Sundays. He was elected Baltimore County executive in 1962 and Maryland’s governor in 1966 before he was put on the GOP ticket in 1968. His lack of name recognition and policy experience is perhaps unmatched in modern history, save for Alaska’s Sarah Palin.

Yet Agnew became surprisingly popular. Thanks to his alliterative, slashing speeches against higher education, the anti-war movement, and the counterculture, he finished third behind Nixon and Billy Graham in a poll on the most-respected people in the United States in 1969. But it was his attacks against the media where he really made his name.

On the evening of November 13, 1969, in Des Moines, Iowa, Agnew delivered a broadside for the ages against journalism. With help from Nixon speechwriter Pat Buchanan, Agnew accused the national press of having set itself against Republicans and, by extension, against middle America in a carefully constructed speech.

The context was the networks’ reaction to a recent Nixon television address in which he announced his “Vietnamization” plan of turning more of the fighting over to the South Vietnamese army. In Agnew’s view, when the TV analysts reacted coolly to Nixon’s speech, it automatically proved their bias against the President. “It was obvious that their minds were made up in advance,” he insisted.

The counter-punching Agnew lashed out at the “tiny and closed fraternity of privileged men, elected by no one” who wielded such influence over the news. He charged, “to a man, these commentators and producers live and work in the geographical and intellectual confines of Washington, D.C. or New York City.” But, the Vice President proclaimed, the “views of this fraternity do not represent the views of America.” 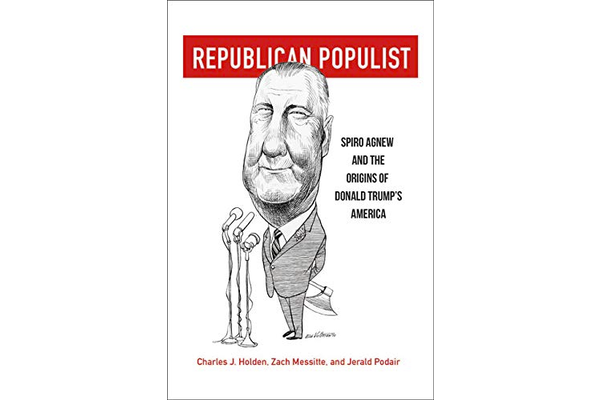 The Des Moines Register’s Richard Wilson characterized the new Republican anti-media strategy as “bold and calculated.” In time, he could have added “effective.” In The Boys on the Bus, Timothy Crouse described the press’s coverage of Nixon in 1972 as “weak, frightened, and demoralized.” In a 1973 Columbia Journalism Review article, Ben Bagdikian analyzed political coverage and concluded that “the Nixon Administration’s three-year war against the news media has succeeded.” He found a “decline in investigation of apparent wrongdoing when it is likely to anger or embarrass the White House.” Of course, enterprising journalists could not be kept down for long. Probing journalists exposed Watergate as well as Agnew’s own downfall.

In October 1973 Agnew pled no contest to tax evasion stemming from a federal investigation into bribery from his time in Maryland politics. The Wall Street Journal, the Baltimore Sun, and the Washington Post exposed the details of the case to a stunned public. Despite his full-throated denials and accusations of press bias, Agnew quickly resigned as Vice President.

But examining the reaction to Agnew’s fall shows that the anti-media strategy was successful with at least one group of Americans – the base Republican voters. Despite the overwhelming evidence of his guilt, Agnew’s die-hards remained convinced he was a victim of a liberal media conspiracy. Agnew’s archives at the University of Maryland are packed with loyal messages from across the country. One wrote, “It seems the Press and News Media finally managed to accomplish their purpose. The liberal leftists have won, by your resignation.” Another assured Agnew that “Millions of Americans hav’nt [sic] forgotten that you were the first prominent politician to come along and tell us the facts about our lying and well-orchestrated propagandizing media.”

As with Trump’s supporters today, belief in the media conspiracy required the denial of inconvenient facts. Of the charges against Agnew, one woman wrote that she and her husband “don’t believe a word that has been said or printed about you.” Another couple proclaimed, “We will never believe you are guilty of the allegations made against you.” Yet another admirer wrote that she had followed Agnew’s troubles in the news, but “I can honestly say, I have not believed a word.”

Agnew’s fiery speeches were therefore doubly effective: they intimidated the press, at least for a time, and convinced his followers there was a conspiracy to bring him down. It also left behind a useful playbook for future Republican politicians. When cornered, President Trump and Secretary Pompeo stoke conspiracy and deny inconvenient facts. According to CBS’s Lesley Stahl, then Candidate Trump came clean in 2016: “You know why I do it [attack the press]? I do it to discredit you all & demean you all so that when you write negative stories about me no one will believe you." Spiro Agnew could not have said it better himself.