Derek Litvak is a Ph.D. student in the department of history at the University of Maryland. 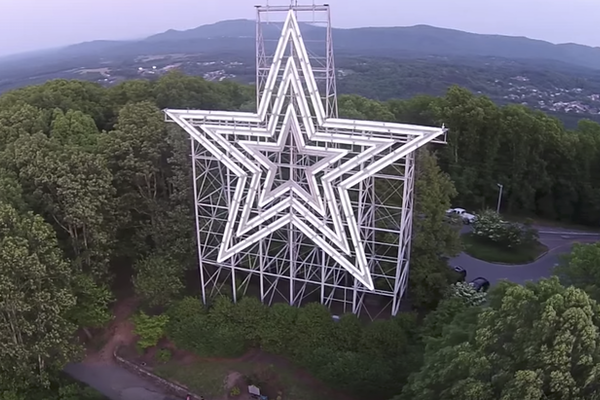 Atop Mill Mountain in Roanoke, Virginia sits a giant metal star, standing at nearly ninety feet. Almost every night the star is brightly lit, as a sort of landlocked lighthouse at the edge of the Blue Ridge Mountains. It can be seen from almost anywhere in the small city, including the cramped living room of my childhood apartment. And it always seemed so far away from where I lived, both physically and figuratively. A lush green mountain, topped with a star, was a far cry from the low income HUD apartment of my youth, which sat feet from a large concrete drainage ditch. When it was warm outside, children would play in the ditch and explore the open tunnels that punctuating each side, all under the watchful gaze of the Roanoke Star. Roanoke was, and remains, a deeply segregated city.

Closer to home sat Lincoln Terrace Elementary School. Google Maps puts the school a mere 1,056 feet from my patio. Had it not been for the small wooded area that sat between the school and my apartment complex, it would have been just as visible as the Roanoke Star. My experience with Lincoln Terrace Elementary, however, is tangential at best. I never went there. Nor did anyone else in my 108-unit apartment complex, or half the children in the complex next to mine. The one street of our neighborhood bisected those apartments, leading children on the other side of the road to Lincoln Terrace. My side of the street, on the other hand, went to a different school that required my bus to pass the school just feet from where I lived and to drive past yet another elementary school before dropping me off each morning.

Why? The school district lines hadn’t been changed since desegregation. Those lines remained unchanged until 2010, my junior year of high school.

I never quite understood how that could happen. I had learned about de jure and de facto segregation in school. The former was by law, and the other by choice. But why would people choose to live segregated lives? And how did the country really get from one form of segregation to the other? I knew about Reconstruction and Jim Crow, but that seemed so far in the past and confusing. Furthermore, how could the institution of slavery possibly be connected to which classroom I sat in to learn history? After all, the vast majority of white Southerners didn’t even own slaves.

That’s the one thing I can remember learning in grade school about slavery. Not all white people. I know I learned more than this, but this is the one thing I vividly remember being stressed in my grade school education. The rest is a sort of blur. Pieces of history dispersed throughout the grand narrative of American progress. What glimpses of Black America I found in my education never seemed to connect.

If Americans have traditionally understood 1776 to be a monumental moment in our history, and the birth year of our country, the 1619 Project takes us further back to 1619, when the first enslaved Africans arrived in British North America. By foregrounding this country’s history of race based chattel slavery and its long shadow, the 1619 Project seeks to connect those disparate moments of history I was never able to make sense of as a student. It is, first and foremost, an education project, which will hopefully allow future generations of students who, like myself, are left wondering what any part of our history means. The Project has had much success--some people lined up for hours to receive a free copy--and some school systems will include it as supplemental material to their history lessons.

Yet, the 1619 Project has not been warmly received by everyone. Conservatives denounced it immediately, saying it was--in the words of Newt Gingrich--a “lie.” The 1619 Project has also garnered a large amount of criticism from a vocal minority of historians, with Sean Wilentz, Victoria Bynum, James McPherson, James Oaks, and Gordon Wood taking the lead. These historians present their critiques as “a matter of facts,” yet their comments betray their true grievances.

One of the major points of historical critique these scholars have leveled against the 1619 Project deals with one sentence in the project’s introductory essay by Nikole Hannah-Jones. “One of the primary reasons the colonists decided to declare their independence from Britain was because they wanted to protect the institution of slavery,” she wrote. While the 1619 Project is nearly 100 pages in total, these historians have given interviews and written entire articles almost solely dedicated to debunking this statement.

No work of history is above critique. Not the 1619 Project. Not mine. And certainly not those of the 1619 Project’s dedicated critics. These historians have attempted to prove, without a doubt, that Americans could not possibly have wanted independence from Britain because of slavery. And, if we are fair, they have a good case. They point out that Britain only had a fledging anti-slavery and abolitionist movement at this time. Loyalist enslavers also present a conundrum for Hannah-Jones’s statement, as many enslavers not only chose to stay loyal to the British Empire, but had their property--i.e. slaves--seized by Patriot governments as a result.

But it is worth asking why it seems so difficult to admit slavery could have played a major part in the American Revolution. After all, Americans were infuriated by British attempts to free enslaved people during the war. Lord Dunmore’s 1774 Proclamation, which offered freedom to enslaved people who fled rebel enslavers, angered and scared Patriots and Loyalists alike. Are we to assume no Patriots would have picked up arms to protect their property, a sacred right in the Anglo-American tradition, from a royalist governor attempting to foment a slave rebellion?

Immediately following the war, the question of whether runaway slaves belonged to Patriots or Loyalists was of such importance that a committee was set up in New York City to settle disputes. This eventually led to the Book of Negroes, something Simone Browne, a scholar of blackness and the surveillance state, has likened to a “no-sail list.” The actions of the British left such a bad taste in the mouth of southern enslavers that throughout the 1780s, they accused Northerners of being just as bad, or worse, than their former imperial lords if Northerners didn’t actively assist in the retrieval of fugitive slaves.

These are all well-known facts. This is to say even the arguments leveled by these critics are an interpretation of history, despite their claims of simply fact-checking. Then again, simply stating the facts has never been the real point for these scholars. They are, after all, accomplished and award winning historians who have built their own careers critiquing and being critiqued for their interpretations of “the facts.” Yet they have repeatedly acted as if the very fact that the 1619 Project can be critiqued means the entire work is moot. The idea that any other piece of historical writing could stand up to such standards is almost laughable. If we were to apply the model the 1619 Project detractors are putting forward, the world would either have no works of history or exactly one “right” work.

Their real reasons for opposing the 1619 Project are, well, quite black and white. If the Project seeks to correct the established narrative of American history, which has for so long sidelined slavery, racism, Jim Crow, the Civil Rights movement, mass incarceration, and a host of other things in the prefix of African American History, these scholars seek to maintain the status quo. For these scholars, the 1619 Project gets the “facts” wrong, and instead interprets history in a way which, in their words, foregrounds “identity politics.”

Identity politics is the favorite phrase of those who oppose changes to the status quo. It is less a scholarly critique than an insult leveled by The Federalists Society. It illustrates a fundamental misunderstanding from these scholars that history is and has always been political. The national narrative of U.S. history we are all so familiar with could not be constructed without first contemplating who is and is not a part of the nation, which is in and of itself a political project.

This political project is not only wrapped up in what constitutes a “fact,” but also in interpreting them. Yet, in his most recent criticism of the 1619 Project, Sean Wilentz ended by imploring people to stick to the facts, and remember the example set by W.E.B. DuBois. Likening his own crusade against the 1619 Project to DuBois’s struggles to rewrite the racist historical narrative of Reconstruction, Wilentz stated that “in exposing the falsehoods of his racist adversaries, Du Bois became the upholder of plain, provable fact.”

Such a use of DuBois willfully ignores that in heralding the “facts” before the people, the narrative of history DuBois wrote was not only part of his own political project in fighting for Black equality, but something his readers pushed back against. William MacDonald, in his 1935 reviewof Black Reconstruction for the New York Times, commented that “there is no need to accept the author’s views about racial equality in order to recognize” his contribution to history. In quoting DuBois’s statements on Black equality, MacDonald ended his review by saying DuBois’s uncompromising “fight for absolute equality” was troubling, to say the least.

Wilentz’s ill-advised use of DuBois is a not so subtle sleight of hand, meant to admonish the 1619 Project and its contributors for straying away from “real” history towards “identity politics.” It is also, to be frank, the scholarly equivalent of using the “I have a Black friend” excuse. Quoting DuBois doesn’t change the fact that Wilentz and his fellow scholars, like MacDonald, would rather have the history without the social consequences, and the “facts” without the interpretation.

What DuBois and so many historians before and after him have known, however, is history has never been just the facts. DuBois did not seek out the facts for the sake of facts. He did it to combat Jim Crow America. The 1619 Project is not interested in retelling America’s founding story. It seeks to forge a new one. The people who contributed to this effort know full well those like myself, who grew up in the drainage ditches of America, in the long shadow of a bright star, need to hear and read our history. Demands to “stick to the facts” often sideline or silence our story.

What Wilentz and his fellow critics are intent on forgetting is history has always been an interpretive art. Facts can say one thing. History should often say another. After all, the vast majority of white Southerners didn’t even own slaves.