The Total Eclipse That Helped Prove Einstein's Theory of Relativity

Sylvester James “Jim” Gates, Jr. is a theoretical physicist who is most known for his work on supersymmetry, supergravity, and superstring theory. He is the Brown Theoretical Physics Center Director, Ford Foundation Professor of Physics, Affiliate Professor of Mathematics, and Faculty Fellow, Watson Institute for International Studies & Public Affairs at Brown University. In 2013, he was awarded the National Medal of Science, the highest award in the United States given to scientists. He is former president of the National Society of Black Physicists, a Fellow of the American Physical Society, the American Association for the Advancement of Science, and the Institute of Physics in the United Kingdom. Professor Gates gives popular-level lectures regularly and makes frequent appearances in documentaries about science.

Cathie Pelletier is the critically acclaimed author of twelve books, including The Funeral Makers, The Weight of Winter, and The One-Way Bridge. Several have been translated into numerous languages, and two have been made into films. She lives in Allagash, Maine. 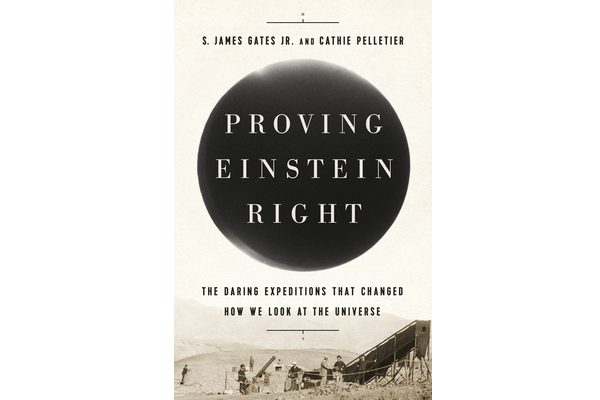 When Albert Einstein published the first draft of his general relativity theory in 1911, it predicted that light would bend when passing the gravitational pull of a large object. To verify his calculations, he needed two things: astronomy and a total eclipse of the sun.  If astronomers journeyed to the narrow eclipse track—it’s called the path of totality and is less than a hundred miles wide—where the sun’s light is completely blocked by the moon, they might photograph starlight as it passed our closest star. That is, if all aspects of the expedition went as planned.  Over the course of a decade seven daring astronomers would attempt to test Einstein’s theory.  They were faced with tremendous obstacles even when things went well. Planning an expedition was not an easy task.

The century’s first total eclipse, on May 28, 1900, was a perfect example of the work that goes into accommodating a visiting expedition. This eclipse shadow crossed the face of the earth like a current of electricity, connecting a string of human beings who waited along a path more than 10,000 miles long. Its track of totality was narrow, only 50 miles wide. But its length was expansive in that it reached many places that would provide good viewing around the globe. As the moon’s shadow, or umbra, moved eastward at approximately 2,200 miles per hour, it was observed by scientists in Mexico, the United States, Portugal, Spain, Algeria, Tunisia, Libya, and Egypt before the shadow ended in the Red Sea. In the United States, its path swept across several southern states, stretching 925 miles from New Orleans to the coast of Virginia. There would not be another total eclipse viewable in the country for eighteen years, and the press jumped on it.

Two of the towns in the southern states that lay in the eclipse path were Washington, Georgia, and Wadesboro, North Carolina. Their locations, far from city lights, would provide good sites for expeditions to set up. It was a major event in these sleepy towns when astronomers descended like locusts in 1900. They may not have been the big theatrical stars of the day, but as distinguished scientists, they were close to it. Even before the teams appeared in person, the excitement had begun. Local buildings were given fresh coats of paint. Lawns were manicured. Cafés and shops stocked up on supplies, anticipating a windfall in sales. Town committees and social groups planned afternoon teas and evening lectures for the esteemed guests. There would also be farewell picnics and barbecues when it was all over. This meant gallons of ice tea made, dozens

of peach pies baked ahead, and enough skillet cornbread and barbecued pork to feed a small army.

Hotel rooms were reserved, and private residences made available to rent. Journalists and photographers arrived and found lodging. Often, the mountains of astronomical equipment would be shipped ahead, accompanied by a team member to oversee its safety. Local boys and men were then hired to unload the many railroad cars. Crates and boxes would be packed into wagons pulled by horses or mules and transported to the campsites. The folks living in the path of totality prepared as well as they could. Then they waited for the “clippers,” as they called them, to appear in person.

A dozen of the most prestigious American observatories sent teams to these southern locations. The cast of characters would read like a who’s who of famed pioneers in the field of astronomy, both the old guard and the new. When the astronomers arrived, the serious work began. Masons would begin erecting the brick piers, and carpenters would build the wooden platforms to hold the telescopes. The canvas huts and awnings that would protect such expensive equipment from rain and sun would need erecting. Volunteers were chosen to act as security guards, standing watch at the huts during the night. Helpers who were needed on eclipse day to assist in scientific tasks such as handling the stopwatch and calling the time might be found among local merchants, blacksmiths, and farmers. They would be rehearsed in their tasks for two or three days before the eclipse. Sketch artists who could capture the image of the corona either came with the expeditions or were found locally. By eclipse day, telescopes forty feet high would be pointing at the sky, like carnival rides at a state fair.

Nature was kind on May 28, 1900. On the day of the eclipse, there would be clear blue skies along most of the path from New Orleans to the Atlantic Ocean. The streets of Washington, Georgia, were packed tight with people, many reminding each other, “Don’t look with your bare eyes!” On out-of-the-way hilltops and in open fields, the astronomers kept close watch on the crescent’s length. Their numerous telescopes and cameras

were ready. Business owners locked up shop and went with their employees into the streets. The many sketch artists, including “five young ladies from town,” stepped up to their boards, excited. Once totality began, some artists would sketch just what they saw with their naked eyes. Others would peer into the eyepieces of telescopes as they drew.

At 8:10 a.m., as the spectators waited, breathless, the moon began its ascent on the sun. As viewed in Washington, the full eclipse lasted for one minute and twenty-five seconds. That was long enough to disturb the natural world. Flocks of purple martins and swallows flew in circles overhead as cicadas and insects rattled in confusion. The Macon Telegraph commented on this disruption as the umbra fell over the countryside: “The cows that were being driven in small groups to the pastures near the city stopped in the streets and tried to turn back. Chickens and fowls cackled and cawed, denoting their alarm. The ignorant and superstitious dropped on their knees and prayed to be forgiven.” In the town of Washington, the crowd cheered wildly as the darkness receded and the sun began its reappearance.

Traveling at such a phenomenal speed, the eclipse shadow passed over South Carolina and raced on to North Carolina. The streets in Wadesboro were also flooded with spectators, an excursion train from Charlotte having arrived earlier with hundreds of people. Most of the scientists were dispersed, set up and waiting in individual encampments. Despite the early hour, the temperature was almost seventy degrees. Although the “Yanks” had been warned of the southern heat even in late May, several would collapse and need treatment by local doctors. As the full eclipse began, people watched from sidewalks or climbed to the rooftops of buildings, holding in their hands pieces of smoked glass or darkened binoculars. A smattering of small and inexpensive telescopes owned by schoolchildren were pointed at the sky. The total eclipse was over in less than ninety seconds when a sliver of yellow sun began to emerge. The shadow had already sped on to Norfolk, Virginia. There, it would dash across the Atlantic to reach the people eagerly waiting in Europe and Africa.

Scattered along the path of totality to view the eclipse of 1900 were five astronomers whose careers would later be linked to a man named Einstein, who was yet to graduate from the Swiss Polytechnic Institute in Zurich. In Thomaston, another tiny town in Georgia, from the Lick Observatory in California, were William Campbell and Charles Perrine. In Portugal, from the Royal Observatory at Greenwich, were Frank Dyson and Charles Davidson. And standing on the rooftop of the Hôtel de la Régence in Algiers was Andrew Crommelin, also from Greenwich. The last three men who would have an important role to play were Erwin Freundlich, a fifteenyear-old German schoolboy who was dreaming of becoming a shipbuilder; Arthur Eddington, an English college student who had just that year discovered a love for physics; and Edwin Cottingham, who was busy in his clock shop in the tiny village of Thrapston, England.

A dozen years down the road from the 1900 eclipse, Freundlich would send Perrine a letter in which he would refer to a Professor Einstein who had just conceived of a new theory that needed verification. This letter would set the ball rolling, and that theory would change all their lives. It would also mean forsaking the classical physics they had learned as students. But this chain of events was still more than a decade away. It was now a brand-new world that had just entered into a brand-new century. From that day in 1900 to the eclipse in 1919 that would make Einstein world-famous, there would be twelve more total solar eclipses. Their paths of totality would touch on all seven continents and cross all oceans. These marvels of nature still had much to teach about the secrets of the universe. The astronomers were learning. It would be a matter of the right eclipse, the right place, and the right time.

This article has been adapted from Proving Einstein Right: The Daring Expeditions that Changed How We Look at the Universe  by Sylvester James “Jim” Gates, Jr and Cathie Pelletier. Copyright © 2019. Available from PublicAffairs, an imprint of Perseus Books, LLC, a subsidiary of Hachette Book Group, Inc.