WILLIAM G. HYLAND JR. is an Adjunct Professor of Law at Stetson University College of Law and the author of several books, including his newest biography, GEORGE MASON, THE FOUNDER WHO GAVE US THE BILL OF RIGHTS (REGNERY HISTORY, 2019). His previous books include, IN DEFENSE OF THOMAS JEFFERSON(St. Martins/Thomas Dunne Books, 2009), nominated for the Virginia Literary Award for 2010. His publications also include numerous law review articles, including Law v. National Security: When Lawyers Make Terrorism Policy,University of Richmond Journal of Global Law and Business (Summer, 2008); Creative Malpractice: The Cinematic Lawyer, University of Texas Review of Entertainment and Sport Law, Vol. 9 (May, 2008) and A Civil Action: Hemings v. Jefferson,American Journal of Trial Advocacy, Vol. 31. (December, 2007). He holds a B.A. from the University of Alabama and a J.D. from the Cumberland School of Law at Samford University. He is a trial lawyer and with over thirty years of appellate and civil litigation experience. Before law school, Mr. Hyland worked with a Top Secret security clearance for the U.S. Arms Control and Disarmament Agency and served an internship at the Georgetown Center for Strategic and International Studies. Mr. Hyland also serves on the Board of Directors of the Thomas Jefferson Heritage Society. 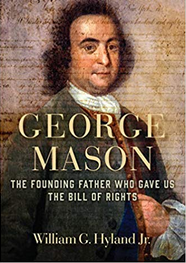 America was woven together by three revered pieces of political paper: The Declaration of Independence, the Constitution, and the Bill of Rights. George Mason’s intellectual potency had a decisive role in shaping and producing all three documents, and leaves one with an inevitable conclusion: George Mason deserves careful and renewed focus.

As War seemed inevitable in the Summer of 1776, Mason assumed a leadership role in the Virginia Convention as Fairfax County's delegate to Williamsburg. Five days after meeting in May 1776, the Virginia Convention formed a committee to draft a bill of rights and a new constitution. Mason was appointed to the Committee on his first day at the convention. It was in this Committee that Mason drafted his most famous writing and posit to American history: the Virginia Declaration of Rights, the antecedent to the Declaration of Independence and the Bill of Rights. In fact, Mason’s prolific words flowed first---before Jefferson, Madison, Hamilton, or Washington’s and famously read:

That all men are created equally free and independent and have certain inherent natural rights among which are the enjoyment of life and liberty…and obtaining happiness and safety.

Mason’s draft was approved by the Convention on June 12, 1776, and quickly printed in The Virginia Gazette, reprinted in The Pennsylvania Gazette and in Williamsburg newspapers, nearly a full month before Jefferson’s draft of the Declaration of Independence. Mason’s Declaration of Rights was disseminated and reprinted all over America and beyond the seas. While Jefferson resided in Philadelphia, he had an obvious preoccupation with the ongoing events at the Virginia convention. Throughout late May and early June 1776,couriers moved back and forth between Williamsburg and Philadelphia, carrying drafts for the bill of rights to the convention.

Mason had already completed his Declaration of Rights when John Adams, Benjamin Franklin, Thomas Jefferson, Richard Henry Lee and Edmund Pendleton were all in Philadelphia struggling to compose the “original” Declaration of Independence. No doubt, they read Mason’s completed manuscript that was in the hands of Richard Henry Lee, and later saw it reprinted in the newspapers. Mason’s Declaration of Rights was personally handed to Jefferson in manuscript form by Lee, who had received it from his brother, T.L. Lee, in late May, 1776.  Jefferson's first draft of the Declaration, which has never been found, seemed extremely similar to Mason's Declaration of Rights. Both Franklin and Adams, who were on the committee with Jefferson in Philadelphia, later prepared a Bills of Rights for their respective states. Yet neither of them adopted Jefferson's version of the Declaration. The Pennsylvania's Bill of Rights of September 28, 1776 also used Mason’s language:

All men are born equally free and independent, and have certain natural, inherent and inalienable rights, amongst which are, the enjoying and defending life and liberty, acquiring and possessing and protecting property, and pursuing and obtaining happiness and safety.

Thus, the historical case can be made that George Mason should be fully credited with the original draft of what ultimately became the famed Declaration of Independence. One could argue that for the most part, Jefferson smoothed, edited, and pruned Mason’s language from the Virginia Declarations of Rights--written three weeks before Jefferson’s final product. Did Jefferson plagiarize Mason’s work? Absolutely not. Did he borrow heavily in constructing his own document to famous effect? Yes. Jefferson condensed and eloquently expressed Mason’s language, ultimately making the document his own while retaining its essential content. Both documents boldly proclaimed that all men were born free and that the duty of government was to protect their safety, liberty and happiness. Jefferson would later write in his autobiography that Mason’s “elocution was neither flowing nor smooth, but his language was strong, his manner most impressive, and strengthened by a dash of biting cynicism when provocation made it seasonable."

Mason’s Declaration of Rights combined a succinct statement of the republican principles that underlay the Revolution with a smattering of constitutional doctrine designed to protect individual civil liberties. The opening paragraphs throb with a richer emotion than any other public document Mason ever wrote. Mason’s second article confirmed that magistrates derived their powers from the people, and in a third article Mason asserted the people’s “indubitable, inalienable and indefeasible Right to reform, alter or abolish” any government that failed to provide “for the common Benefit and Security of the People, Nation, or Community.” Mason’s fourth article repudiated the notion of a hereditary aristocracy. “The Idea,” he wrote, “of a Man born a Magistrate, a Legislator, or a Judge is unnatural and absurd.”

History has consigned Mason to the second tier of historical significance. Quite simply, given the length and breadth of Mason’s political writings and influence, his name should be more recognizable in the public domain and in the same conversation with Thomas Jefferson, James Madison and Alexander Hamilton. Although some have largely dismissed Mason as a man who simply refused to sign the Constitution (he was one of three men who refused), this is not a historically accurate portrayal of the man. He refused to sign the final document because he believed it sanctioned human slavery and omitted the rights of individuals. He outlined his refusal in “Objections,” written at the Convention and later read in every town and village: "There is no Declaration of Rights." He carried his struggle for a Federal Bill of Rights to the people and lived barely long enough to see his efforts crowned with Congressional victory, the monumental Bill of Rights.

While few Americans know Mason today, in his own time and place his contemporaries grasped at superlatives to describe the Virginian. Madison exuded that “Mason possessed the greatest talents for debate of any man I have ever seen or heard speak.”Patrick Henry pronounced him “the greatest statesmen I ever knew.” Jefferson complimented his mind as “great and powerful.” Philip Mazzei, the Florentine physician and world traveler, wrote, “he is not well enough known. He is one of those brave, rare—talented men who cause nature a great effort to produce.” The Italian ranked Mason as one of the intellectual giants: “[Mason] is one of those strong, very rare intellects, which are created only by a special effort of nature, like that of a…Machiavelli, a Galileo, a Newton…and so forth.”

Although George Mason lived and wrote almost 250 years ago, his ideas are especially relevant to present day America. Mason’s true importance in the 21st century is to be found in the cauldron of his ideas--the rights of the human spirit, life and liberty. His constitution-making shattered the old myth of divine right-vox populi, vox dei- and proved that mankind could handle their own affairs. Mason understood more than most that necessary powers must be given to a government, but the price of increased power was decreased liberty. Mason’s political works were a creation of a democratic genius of mind and heart. He was the instrument of expressing, in one brief document, the concentrated resolution of a nation: the causes, the motives, and the justification of individual liberty against tyranny. Mason speaks to us now, because he spoke so powerfully in his time. His life and writings were directed by the epic issues of the Revolution, similar issues that confront us today: individual rights, governmental power and warfare.

Thus, the historical case can be made for Mason's elevated public fame, placing him among the more famous of American Founders for both civil rights and freedom of religion. George Mason rightly deserves to be considered one of the fathers of our national government.