Why the Middle East Studies Association Should Not Defend Omar Barghouti

A.J. Caschetta is a principal lecturer at the Rochester Institute of Technology and a fellow at Campus Watch, a project of the Middle East Forum, where he is a Ginsburg-Ingerman fellow. 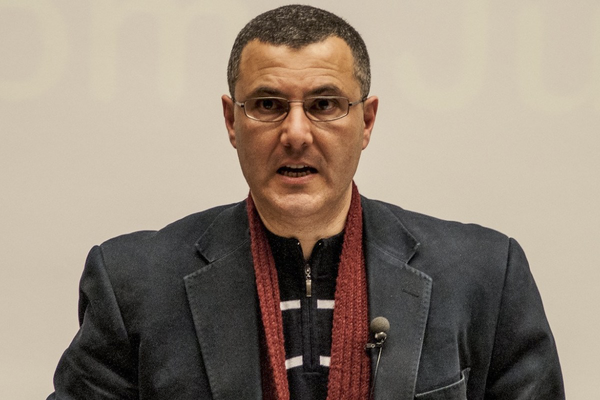 Amazingly, Barghouti lives in Israel, not in Gaza, Nablus, or Ramallah, as one might expect from a man who describes Israel as an apartheid state. He was refused entrance to the U.S. on April 10 when immigration officials prevented him from boarding a flight at Ben-Gurion airport. Barghouti was scheduled to speak at several American universities, be interviewed by journalist Peter Beinart and Temple University professor Marc Lamont Hill, and attend his daughter’s wedding.

In its CAF letter, MESA describes Barghouti’s denial of entry as “an act of political censorship” and a “politically motivated attack on the right of Americans to hear and engage with the full range of viewpoints on the Israeli-Palestinian conflict.” It quotes Amnesty International’s mischaracterization of Barghouti as a “human rights defender” and contends that the U.S. and Israel are engaged in a deliberate effort to undermine “the principles of academic freedom.”

MESA portrays Barghouti as a dissident who has been unfairly treated simply “because the U.S. government does not like his political views.” But Barghouti is much more than an outspoken activist whose opinions conflict with U.S. policy. He presides over an intricate web of anti-Israel groups. They offer the illusion of legitimate political organizations and charities, but they provide cover for terrorist organizations.

Barghouti founded the Palestinian Campaign for the Academic and Cultural Boycott of Israel (PACBI) in 2004. It spawned a franchise model of campus organizations collectively known as the Boycott, Divestment and Sanctions (BDS) campaign. In 2007, Barghouti founded the BDS National Committee (BNC). Tablet magazine calls it “the main West Bank and Gaza-based cohort advocating for sanctions against Israel.” But there’s more to it than advocating sanctions. The BNC lists a number of supporting “Unions, Associations, Campaigns,” one of which is called the Council of National and Islamic Forces in Palestine/Palestinian National and Islamic Forces (PNIF). The PNIF lists among its member organizations five Palestinian terrorist organizations: Hamas; the Popular Front for the Liberation of Palestine (PFLP); the Popular Front-General Command (PLFP-GC); the Palestine Liberation Front; and Palestinian Islamic Jihad (PIJ). This is the face that Omar Barghouti hides and MESA ignores.

In its spirited defense of Saint Omar, MESA fails to mention these salient facts. This is hardly a surprise. As I’ve argued before, MESA has a long history of omitting inconvenient truths in its defense of Palestinian academe.

So, what would Omar Barghouti say on his MESA-approved speaking tour? If his recent appearances in academic settings are any indication, it would be a combination of conspiracy theories, anti-Semitic canards, and variations on “the right of return” rhetoric.

Barghouti is an accomplished trafficker in conspiracy theories. On February 24, 2015, he told a Portland State University audience that “The U.S. and Israel are benefitting a lot from this ISIS phenomenon,” and that the U.S. and Israel “created Taliban, they created al-Qaeda . . . so why not ISIS?”

Although he denies it, Barghouti’s anti-Semitism is indisputable. On January 11, 2014, he regaled an audience at Wayne State University by telling them that “Israel has a hold on Congress, has enormous influence on Congress...Congress is bought and paid for by the Israel lobby.”

The destruction of Israel is high on Barghouti’s wish list. The influx of 5 to 7 million Palestinian refugees will mean the end of Israel. As one of the authors of the “One State Declaration” (2007), he has long pined for a Palestinein which “Jews will by a minority.” He justifies this fantasy with jargon-filled hyperbole about Israeli “ethnic cleansing” and the Jewish colonization of Palestine.

In Spain, a judge has admitted a criminal complaint against Barghouti lodged by the Madrid-based group ACOM which has called attention to Barghouti’s claims that “BDS demands would result in the destruction of Israel.”

MESA’s claim that the administration should not “ban people from entering the United States on ideological grounds” is a sham. If a similar media tour were scheduled for a “white nationalist” claiming that non-whites control Congress, urging the removal of non-whites from the U.S., and linking non-whites with terrorist groups, MESA would be singing a different tune. Yet MESA supports Barghouti who claims that Jews control Congress, advocates for the removal of Jews from Israel, and links the U.S. and Israel with the creation of al-Qaeda, the Taliban, and ISIS.

Omar Barghouti should not be let into the U.S., now or ever. A thorough investigation of his network of organizations should earn him a place on the U.S. Department of Treasury’s Specially Designated Nationals and Blocked Persons List. Shame on MESA for supporting his subterfuge under the guise of academic freedom.