Whose Country is This? Trump, Coolidge, and Immigration

Dr. Bruce W. Dearstyne is a historian in Albany, NY. His latest book is The Spirit of New York: Defining Events in the Empire State's History. 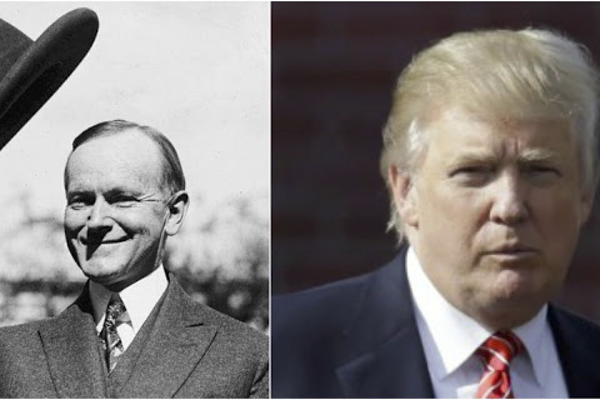 The current divisive debate over national immigration policy has two sets of confrontational positions. On one side, advocates of immigration favor a liberal policy of admitting sizable numbers of immigrants, no discrimination based on ethnicity, religion, or national origin, and protection of undocumented immigrants. On the other side, President Trump is the leading spokesperson and advocate for building a wall on our southern border with Mexico, banning certain immigrants from entering the country, and deporting those living here illegally, many of whom, he insists, are criminals.

The debate in some ways echoes discussions in the nation a century ago.

In 1921, the vice president published an article entitled "Whose Country Is This?" in the popular magazine Good Housekeeping.  "We are confronted by the clamor of multitudes who desire the opportunity offered by American life," the author noted. But America has no place for "the vicious, the weak of body, the shiftless or the improvident....Our country must cease to be regarded as a dumping ground." People accorded the privilege of immigrating to the U.S. should become productive, patriotic citizens. "It would not be unjust to ask of every alien:  What will you contribute to the common good, once your were admitted through the gates of liberty?"

"There are racial considerations too grave to be brushed aside for any sentimental reasons," the author continued.  "Biological laws tell us that certain divergent people will not mix or blend.  The Nordics propagate themselves successfully.  With other races, the outcome shows deterioration on both sides."

What was needed was "the right kind of immigration."

That sounds a bit like some government leaders who are demanding immigration restriction today. Actually, it was Calvin Coolidge (R, Vice President, 1921-1923, President 1923-1929).

He became President on August 2, 1923, upon the death of President Warren G. Harding, and was elected in his own right the next year. Coolidge was bland and taciturn. He tried to avoid controversy. But Coolidge had strong views on immigration, some with parallels to today.

In his first address to Congress on December 6, 1923, he struck a theme of limited, selective immigration: “New arrivals should be limited to our capacity to absorb them into the ranks of good citizenship. America must be kept American. For this purpose, it is necessary to continue a policy of restricted immigration.”

In 1924, he signed the Johnson-Reed Immigration Act which severely limited immigration, imposed a quota system based on the 1890 census which in effect favored northern Europeans over others, continued a long-standing ban on Chinese immigration, and imposed a new one on Japanese immigration.

His views on immigration were complicated.

Speaking to a delegation of labor leaders on September 1, 1924, he asserted that "Restricted immigration has been adopted by this administration chiefly for the purpose of maintaining American standards. It undoubtedly has a very great economic effect. We want the people who live in America, no matter what their origin, to be able to continue in the enjoyment of their present unprecedented advantages. This opportunity would certainly be destroyed by the tremendous influx of foreign peoples if immigration were not restricted. Unemployment would become a menace, and there would follow an almost certain reduction of wages with all the attendant distress and despair which are now suffered in so many parts of Europe. Our first duty is to our own people."

The Republican party platform that Coolidge campaigned on that year put the economic case this way: "The unprecedented living conditions in Europe following the world war created a condition by which we were threatened with mass immigration that would have seriously disturbed our economic life. The law recently enacted [the Johnson-Reed Act] is designed to protect the inhabitants of our country, not only the American citizen, but also the alien already with us who is seeking to secure an economic foothold for himself and family from the competition that would come from unrestricted immigration."

Putting the jobs argument more directly, immigration restriction "saves the American job for the American workman," as Coolidge said in a speech in December of that year.

On the other hand, he opposed some immigration restrictions and celebrated America as a melting pot.

For instance, he lobbied Congress not to include the Japanese provision in the immigration act, and instead to continue a longstanding, informal agreement by which Japan voluntarily limited the number of its citizens emigrating to America. Congress included it anyway. In his formal signing statement on May 26, 1924, an angry Coolidge called the provision "unnecessary and deplorable" and asserted that Americans had a "sentiment of admiration and cordial friendship for the Japanese people" despite the new law.

He told the American Legion convention in 1925 that “Whether one traces his Americanism back three centuries to the Mayflower, or three years [ago in] the steerage, is not half so important as whether his Americanism of today is real and genuine. No matter by what various crafts we came here, we are all now in the same boat.”

In a 1926 speech, he said "when once our feet have touched this soil, when once we have made this land our home, wherever our place of birth, whatever our race, we are all blended in one common country. All artificial distinctions of lineage and rank are cast aside. We all rejoice in the title of Americans.”

In Calvin Coolidge's public utterances and his actions on immigration, several themes emerge. Some have reverberations for today.

* Coolidge emphasized that America has prospered and excelled in the past. Times were good then. But things seem to be slipping. Principles and values seemed in danger and future prospects appeared dimmer. Coolidge thought Americans had to be on guard. That sentiment sounds similar to Trump's slogan of "Make America Great Again."

* Coolidge encouraged assimilation. He believed that most past immigrants adopted American values and assimilated with the population already living here. Race, religion, and a consensus about the importance of family, hard work, and patriotism were important parts of that process. But, he went on, people now clamoring for admission were of different races and religions, and were determined to hold onto their own cultures and values. These new immigrants tended to stay together rather than assimilate and blend in and, to Coolidge, that made them a threat to the nation. Coolidge's views in this area seem similar in some ways to Trump's and other immigration restrictionists.

*Economics was a critical issue in Coolidge's thinking. The economy was expanding but there were only so many jobs to go around, he implied. Letting in too many immigrants would take jobs from citizens already here. America’s capacity to absorb newcomers was therefore limited. That sounds a lot like immigration restrictionists' arguments that immigrants (particularly undocumented immigrants) compete with American citizens for jobs, especially low-paying positions.

* Coolidge felt that Americans need not be concerned with conditions in other countries or the fate or prospects of people who wanted to come in as immigrants but were not allowed to do so. That was not something for which Americans had responsibility. It was up to those countries, and to the individuals living there, to fend for themselves. That, too, parallels the view expressed by immigration restrictionists today that unemployment, poverty, and violence elsewhere in the world, e.g., Central and South America, do not justify people from those nations seeking sanctuary here in the United States.

* We have to keep to "America First!" -- a vague and undefined but popular slogan among Coolidge and conservatives in those days and occasionally used by President Trump.  It has overtones of American exceptionalism, nationalism, and patriotism but also undertones of nativism and racism.

Whose country is this? It was a central question a century ago, and still is today. President Coolidge and President Trump might have similar answers to the question.

For more from Bruce W. Dearstyne, check out his latest book: 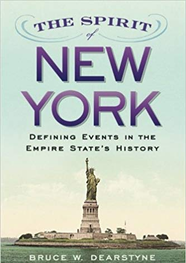