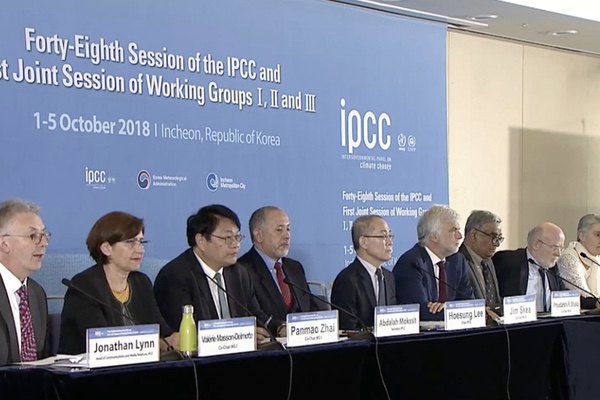 On October 8, 2018 the U.N.’s Intergovernmental Panel on Climate Change (IPCC) issued a report that an author of previous studies called “quite a shock.” Ninety-one scientists from 40 countries analyzing more than 6,000 scientific studies contributed to the report’s findings. It indicated, as has become increasingly clear, that the world is already experiencing “more extreme weather, rising sea levels and diminishing Arctic sea ice” and that if we don’t reduce greenhouse gas emissions faster than we have ever done before, we can expect more devastating storms, flooding (look out low-lying cities like Miami!), extreme heat, drought, water shortages, and deaths from infectious diseases, heat, and smog.

A New York Times article entitled “Stopping Climate Change Is Hopeless. Let’s Do It” indicated that “Solving climate is going to be harder, and more improbable, than winning World War II, achieving civil rights, defeating bacterial infection and sending a man to the moon all together.” The IPCC press release quotes one of the report’s preparers as saying, “This report gives policymakers and practitioners the information they need to make decisions that tackle climate change while considering local context and people’s needs. The next few years are probably the most important in our history.” A day after the report the Nobel Prize for Economics was awarded to two economists who believe we humans can successfully combat global warming—if we can muster the political will to do so.

During the past decade, I have written more than a dozen essays emphasizing the importance of climate change and the environment. Some have pointed out that voters have all but ignored the subject. That is still the case. Earlier this month a New York Times piece indicated that “In an election year that has included alarming portents of global warming—record wildfires in the West,500-year floods in the East, a president walking away from a global climate accord—the one place that climate change rarely appears at all is in the campaigns of candidates for the House and Senate. . . . The vast majority of Democrats and Republicans running for federal office do not mention the threat of global warming.” The main reason for this seeming indifference is “the issue’s perpetual low ranking among voters, even Democratic voters, and of the intense polarization along party lines that has developed around global warming, even as the science of human-caused warming has become overwhelming.”

“Party-lines,” political tribalism, red states and blue states, how sick many of us are about the political gridlock and hatred that, in the aftermath of the Kavanagh-nomination fight, seem worse than ever. And yet here we are facing mid-term elections and mud-slinging to rival that which a recent earthquake and tsunami dumped on Indonesian villages and towns.

Yet, if we care about our future and that of our kids and grandkids (and who, whether Republican or Democrat, does not?), we must get out and vote in the upcoming mid-term elections. And if our caring is enlightened, we will vote Democratic.

Other issues may incline us to lean right or left, Republican or Democratic, but the clincher should be environmental issues, especially that of climate change. What other concern could be more important? Abortion? Jobs? Our paychecks? Economic Inequality? Women’s or Union Rights? The makeup of the Supreme Court? Impeaching Trump? True, some of these matters could impact environmental developments, but none of them can affect the future of our kids and grandkids to the degree that catastrophic climate change can.

It may be unfortunate that the issue has polarized us among party lines, and we should be imaginative in thinking of ways to convince more people, regardless of party affiliation, that human-caused climate change is today’s biggest threat to humankind. But just because the danger is so great, we cannot afford to wait while imaginative, but slow, persuasion (and facts) changes minds.

In a recent interview Rafe Pomerance, a former U. S. Deputy Assistant Secretary of State for Environment and Development, noted that the prerequisite for dealing with the challenges presented by the latest IPCC report “is political will,” but “our leader [President Trump] says that this problem is a hoax,” and “the U.S. [Republican-dominated] Congress . . . won't act.” But for the crucial climate-change battles ahead, the world needs the United States to be all in. The best thing we citizens can now do is bring more people to power now who are ready to act to meet the global-warming challenge. And overwhelmingly those people are Democrats. Perhaps the most active non-governmental global climate movement now existing is 350.org. It is not coincidental that its Action Fund supports Democratic politicians almost exclusively.

In my “Senator Inhofe and the Global Warming Deniers” (January 2015), I pointed out that the then Republicanchairman of the U. S. Senate committee overseeing the government’s response to global warming and climate change was also the author of  The Greatest Hoax: How the Global Warming Conspiracy Threatens Your Future. Moreover, according to a 2013 Conspiracy Theory Poll “Republicans say global warming is a hoax by a 58-25 margin, Democrats disagree 11-77.” In May 2014, Politifact.com checked out California Governor Brown’s claim that few Republicans in Congress accept human-caused climate change, and could find only 8 out of 278 who admitted that it existed.

Here we are about four years later, and congressional Republicans are backing a president whose environmental record has been disastrous. He has undone much of the good work done by President Obama, who declared in his 2015 State of the Union Address that “no challenge—no challenge—poses a greater threat to future generations than climate change.”

Even the business-friendly Forbes Magazine thinks Trump’s climate-change policies have been nightmarish—see its essay “Trump Ignores The Impacts of Climate Change at His Peril—And Ours.”  (The article states that the new IPCC report “explains just how stupid the Trump administration’s approach to climate change is, and the impacts that failing to tackle global warming will have on businesses–and investors–around the world.”)

The Trump approach reminds us of the words sometimes ascribed to France’s King Louis XV, “Après moi, le deluge” ("After me, the flood"). Regarding climate, our president seems more concerned with pleasing those with a vested interest in dirty energy—like the coal industry and the Koch Brothers—than with the future air quality, flooding, and other environmental disasters. After Hurricane Florence, exacerbated by global warming, produced massive flooding in the Carolinas in September 2018, Trump’s after-me-the-flood mentality took on a more literal meaning.

One of the most damning recent criticisms of congressional Republicans comes from a Republican – Christine Todd Whitman, formergovernor of New Jersey (1994-2001) and head of the Environmental Protection Agency (2001-2003). In a recent article (October 1, 2018), she wrote: “Too many Republican elected officials who know better—even those who have publicly recognized the problem of climate change—are still refusing to go beyond words. The Climate Solutions Caucus in Congress has 44 Republican members, but the vast majority of them continue to vote against real solutions or in support of measures damaging to our environment and health. . . . Most frustratingly, these same members have offered no suggestions of their own.”

On November 6th voters will go to the polls. In light of the IPCC report those of us who have long regarded climate change as the dominant challenge of our time can only hope that many conservatives and Republicans will follow the voting advice of the conservative and former Republican Max Boot: “Vote [a] straight ticket Democratic in November.” Although he does not cite the Republican stance on climate change as the main reason for his counsel, he has recognized “that climate change is a major threat that we need to address.” Given that increasing and ever-more-dire danger, we can no longer wait for Republicans to awaken to its dangers.