Harold Holzer, Director of the Roosevelt House Public Policy Institute at Hunter College, is the author of many books including, Lincoln and the Power of the Press: The War for Public Opinion. 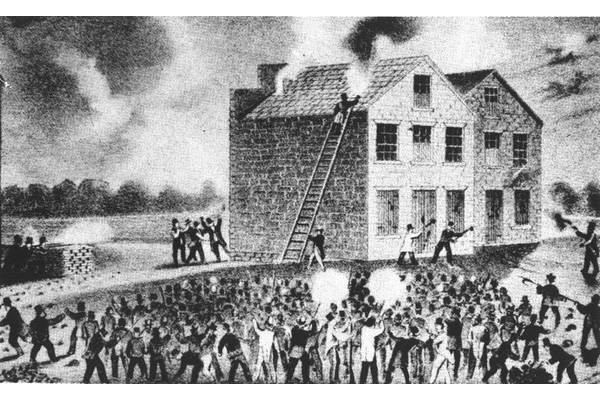 Wood engraving of the pro-slavery mob setting fire to Gilman & Godfrey's warehouse, where publisher Elijah Lovejoy was killed and his printing press thrown into the Mississippi River.

Sadly, there is nothing new—or even newsworthy—about violence against American newspapers. The recent, deadly attack on the Annapolis Capital Gazette is merely the latest of the lamentable episodes, scattered through our history, in which aggrieved parties take out frustrations on “the media.” 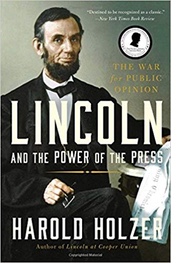 Such assaults began only two years after ratification of the First Amendment guaranteeing freedom of the press. Most were triggered by political animus. In 1793, pro-Federalist Boston editor Benjamin Russell spat in the face of pro-Democratic editor Benjamin Austin, Jr. The transgression cost Russell a twenty-shilling fine, but did little to chill partisan hostilities.

Forty years later, pro-Whig New York editor James Watson Webb found himself facing a cocked pistol leveled at him by fiery Kentucky newspaperman Duff Green on the steps of the U.S. Capitol. According to Webb, Green was a “poor, contemptible, cowardly puppy” brandishing a gun on sacred ground. In Green’s version, Webb raised his cane at him first, refusing to let him pass until he drew his gun to force the New Yorker to lower his stick. A few years later, Webb confronted James Gordon Bennett, editor of theNew York Herald, and threw him down the front steps of a downtown brokerage house. Bennett sneered that his only damage was the loss of three buttons on his coat, “which my tailor will reinstate for a sixpence.”

With the onset of the slavery crisis, these occasional, sometimes comic, squabbles took on a deadlier tone. In 1843, Portsmouth, Virginia editor Melzer Gardner objected to the “hiring” of enslaved African Americans at the navy yard. When a local lawyer named Mordecai Cook, Jr. replied, Gardner’s Chronicle lambasted Cook in print. The two men then met to demand mutual apologies, but both refused, whereupon Cook set on the editor with a cane. To protect himself, Gardner drew his pistol. Cook dropped his walking stick and rushed at the gun-toting editor. During the ensuing struggle, the gun discharged, killing Gardner. When the editor’s friends responded by marching on Cook’s home, threatening to burn it down in reprisal, the lawyer’s widow reportedly fainted dead away—literally. She breathed her last the next day.

Crusading, if somewhat obnoxious, New York Tribune editor, Horace Greeley, a fierce opponent of slavery, was once chased across the U. S. Capitol grounds by a pro-slavery Arkansas Congressman named Albert Rust, who caught up with and pummeled him. In Springfield, Illinois, Abraham Lincoln’s favorite editor once tussled publicly with Lincoln’s longtime political rival. As neighbors looked on, rotund pro-Whig editor Simeon Francis and diminutive Democratic politician Stephen A. Douglas rolled around the muddy streets exchanging harmless blows. Lincoln observed: “The whole affair was so ludicrous that Francis and everybody else (Douglas excepted) have been laughing about it ever since.”

No one in Illinois laughed, however, about an 1837 mob attack at Alton, in the southern corner of the state—the most shameful episode of press violence in American history. It inspired Lincoln to make the first major speech of his storied oratorical career.

Menaced out of inhospitable, pro-slavery Missouri, abolitionist minister-turned-editor Elijah Lovejoy had relocated his newspaper across the Mississippi River to Alton, but its citizens proved no more tolerant. Lovejoy faced so many threats against his life and business (including destruction of three printing presses) that he eventually hid his newest press on the top floor of a riverfront warehouse. On November 7, a mob surrounded him there, demanding access to smash it. When rioters threw up a ladder, Lovejoy bravely appeared at the front door and cast it aside. Shots rang out, leaving the editor dead. Not satisfied with its work, the mob raced past his inert body, found the press upstairs, and sent it crashing out the window onto the street, where protestors broke it apart and threw it into the Mississippi.

Although President Trump recently attempted to salve the wounds of the Capital Gazette murders by belatedly defending journalists’ right to speak, his previous record on press freedom has incited a frenzy against news outlets which criticize him. Trump has done nothing less than label the press “the enemy of the people.” Supporters who attend his rallies often wear shirts emblazoned with threats against CNN.

By contrast, an earlier president, Abraham Lincoln, to whom Trump has compared himself, thought the Lovejoy murder significant—and frightening—enough to require more substantive condemnation. Only 28 years old at the time, the future leader could already foresee that violence against free institutions set the stage for national destruction in the future. Taking the rostrum at a Springfield church for a lecture sponsored by the local Young Men’s Lyceum, young Lincoln issued a warning for the ages. His prose style was more purple than it would be at Gettysburg. But he was already casting his eyes forward to the meaning of a government of, by, and for the people.

“There is no grievance that is a fit object of redress by mob law,” Lincoln insisted that day. “Having ever regarded Government as their deadliest bane,” he warned of those who turned to violence (in what proved an eerie portent of the future), “they make a jubilee of the suspension of its operations; and pray for nothing so much, as its total annihilation…. Thus, then, by the operation of this mobocratic spirit, which all must admit, is now abroad in the land, the strongest bulwark of any Government … may effectually be broken down and destroyed—I mean the attachment of the People.”

Lincoln proposed a remedy: “Let reverence for the laws be breathed by every American mother … let it become the political religion of the nation; and let the old and the young; the rich and the poor; the grave and the gay, of all sexes and tongues, and colors and conditions, sacrifice unceasingly upon its altars.” He might have been speaking to us today.

We all know what happened when Lincoln’s warnings went unheeded: a house divided and went to war with itself.

During the Civil War, violence against the free press did not end. Lincoln himself was guilty of shutting down newspapers and imprisoning editors overzealously, though he insisted that in times of rebellion the suspension of civil liberties was authorized by the Constitution—in order to save it.

The violence that ripped America apart from 1861 to 1865 proved a terrible price to pay for, among other sins, the undefended violence that had challenged press freedoms in the decades before. The noblest cause of all, Lincoln pointed out at the Springfield Lyceum in 1838, was of “establishing and maintaining civil and religious liberty.” And that included, and includes, freedom of the press to operate, unthreatened by violence—as a friend, not an enemy, of the people.