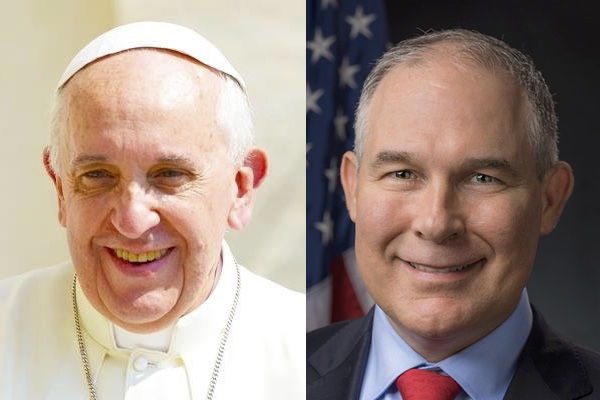 Scientific evidence overwhelmingly attests to the existence of human-caused global warming. The problem, however, is many people ignore or dispute such evidence. Such it has been with evolution, and so it now is with global warming. A recent example has been the man President Trump appointed to the job of protecting our environment—the Environmental Protection Agency’s head, Scott Pruitt—and other Protestant evangelicals who share his hostility to a science-based climate policy. (Evangelicals are primarily Protestants of various denominations who share an emphasis on the importance of experiencing a “born-again” transformation, on the Bible and Jesus as ultimate authorities, and on encouraging others to accept Jesus as their Savior. Evangelicals make up about 25 percent of U.S. voters.)

An article in the century-old pro-business magazine Forbes recently stated that Pruitt “has systematically removed science from environmental decisions and regulations in the United States.” Two other recent articles zero in on Pruitt’s evangelical connections. The first, in Slate, is entitled “God’s EPA Administrator,” and it asks, “Did the politics and history of evangelical Christianity create Scott Pruitt?” The second, a New Yorker essay, asks, “Are Evangelical Leaders Saving Scott Pruitt's Job?”

Late last year I wrote that President Trump’s worst sin was the damage he was doing to our environment and that Pruitt was one of his chief henchmen. “Sin” is a strong word and a religious one. But in using it I was following the example of Pope Francis, in his 2015 climate encyclical. There he quoted favorably the Orthodox Patriarch Bartholomew, who stated:“For human beings … to destroy the biological diversity of God’s creation; for human beings to degrade the integrity of the earth by causing changes in its climate, by stripping the earth of its natural forests or destroying its wetlands; for human beings to contaminate the earth’s waters, its land, its air, and its life – these are sins.”

All of these religious references, lead us to several important questions: 1) Do different religions (e.g., Francis' s Catholicism and Pruitt's evangelical Protestantism) say different things about our obligations regarding climate change? 2) What role do religious beliefs regarding climate change play in the minds of politicians? 3) How do these beliefs affect the behavior of voters?

In answer to the first question about the differences in religions, the answer is, “Yes.” But the answer involves more complexity than one might imagine. Some idea of this complexity can be gained by looking over such books such as the Routledge Handbook of Religion and Ecology (2018), which contains essays on different religions’ and regions’ approach to ecology, plus other ones dealing with subjects such as religions and climate change (see here for an online version of the latter essay). Even within one religion, for example Judaism with its Orthodox, Conservative, and Reform branches, there are often different approaches to climate change.

Our chief concern here, however, is between the different perspectives of the Catholic Pope Francis and Trumpian Protestant evangelicals like Scott Pruitt. In addition to quoting the Orthodox Patriarch Bartholomew about how harming our climate is sinful, Francis begins his climate encyclical by citing the environmental concerns of his papal predecessors since 1971, and then he jumps back to the thirteenth-century’s St. Francis of Assisi, whose name our current pope took as a “guide and inspiration” when he was selected to head the Catholic Church. The pope recommends the saint’s loving attitude toward nature as a safeguard against regarding ourselves as “masters, consumers, ruthless exploiters, unable to set limits on . . . immediate needs.”

Early on, however, Pope Francis transitions from a concern with his Catholic forerunners’ thinking to stating that he will review “several aspects of the present ecological crisis, with the aim of drawing on the results of the best scientific research available today, letting them touch us deeply and provide a concrete foundation for the ethical and spiritual itinerary that follows.” He then goes on to write that “a very solid scientific consensus indicates that we are presently witnessing a disturbing warming of the climatic system. In recent decades this warming has been accompanied by a constant rise in the sea level and, it would appear, by an increase of extreme weather events, even if a scientifically determinable cause cannot be assigned to each particular phenomenon. . . . A number of scientific studies indicate that most global warming in recent decades is due to the great concentration of greenhouse gases (carbon dioxide, methane, nitrogen oxides and others) released mainly as a result of human activity. As these gases build up in the atmosphere, they hamper the escape of heat produced by sunlight at the earth’s surface. The problem is aggravated by a model of development based on the intensive use of fossil fuels, which is at the heart of the worldwide energy system. Another determining factor has been an increase in changed uses of the soil, principally deforestation for agricultural purposes.”

Thus, from the beginning of his encyclical, Francis displays the utmost respect for scientific findings. Popes, however, have not always been so open-minded. Mention of the Catholic papacy’s negative reaction to the contentions of Copernicus and Galileo that the earth revolved around the sun (and not vice versa) is enough to dispel any overly-rosy generalizations about past papal respect for science.

Yet, the Catholic Church has never taken an official position on Darwinian evolution, and unofficially it has never been as hostile to it as Protestant evangelicalism. Most notable among evangelical opponents to Darwin, as the famous Scopes Trial of 1925 reminds us, were the fundamentalists. (A Pew Research survey indicates that only 27 percent of white evangelical Protestants, as compared to 68 percent of white Catholics, are willing to accept that “humans have evolved over time.”)

Although fundamentalists are only a subset of evangelicalism, by 1930 a decades-long transformation was occurring among evangelicals in general. As conservative columnist Michael Gerson points out, before the Civil War many evangelicals were abolitionists who believed in social justice and progress, but by 1930 “all progressive social concern . . . became suspect” among most evangelicals.Decades later white evangelicals “shamefully” sat out or opposed the civil rights movement.

In general, as a 2014 survey revealed, white evangelical Protestants are less likely than other major U. S. religious groups to concern themselves with scientific developments or to believe that climate change is an important environmental matter. Although U. S. Catholics were more than twice as likely as white evangelical Protestants to say that climate change is the “most pressing environmental issue,” they still did not prioritize it as much as they have done since Pope Francis’s climate encyclical, which has swayed, some, but by no means all, Catholic believers.

Although climate change may or may not be of much interest to religious believers, it can no longer be ignored by national politicians. This brings us to our second and third questions: What role do religious beliefs regarding climate change play in the minds of politicians and voters? In light of the overwhelming percentage (81 percent) of white evangelicals who voted for Donald Trump in 2016 and the prominence of evangelicals like Vice-President Pence and EPA head Pruitt in the Trump Administration this question has special importance.

Trump’s own religious views are less clear. But the evangelical leader James Dobson claimed that during the 2016 campaign Paula White, a Florida televangelist and spiritual advisor to Trump, converted him to evangelicalism. What is certain, however, is that Trump considers himself a Christian and has supported many goals of conservative evangelicals.

Evangelicals are influenced by their faith’s distrust of science and belief in God’s omnipotence. One example is furnished by Pastor Ralph Drollinger, author of “Rebuilding America: The Biblical Blueprint” and conductor of a weekly Bible-study meeting attended by many of the Trumpian evangelical cabinet supporters—about Drollinger and his Bible-study group Pruitt has stated, “to be encouraged, to pray . . . to spend time with a friend, a colleague, a person who has a faith focus on how we do our job, whether it’s through prayer or through God’s Word, and to encourage one another in that regard is so, so important, and we have that in our Cabinet and it’s such a wonderful thing.”

Drollinger has written: “To think that Man can alter the earth’s ecosystem—when God remains omniscient, omnipresent and omnipotent in the current affairs of mankind—is to more than subtly espouse an ultra-hubristic, secular worldview relative to the supremacy and importance of man. . . . In our lifetime there has been a radical shift in aggregate, national religious belief. In essence and unfortunately, America has been in the process of changing horses: from the religion of Christianity to one of Radical Environmentalism. We are in the process of exchanging the worship of the Creator for the worship of His creation. This is a huge and dire error, with extreme consequences, and it presages disaster.”

But not all evangelicals share this view. In deciphering the role of religious faith in the politics of evangelicals, the insights of Gerson (see above) seem most pertinent. He believes his own evangelical faith has shaped his life, but that “Christian theology is emphatically not the primary motivating factor” in the minds of evangelical politicians and voters(my bolding). He writes that “Fox News and talk radio are vastly greater influences on evangelicals’ political identity.”

Also influencing their political choices are other factors like geographic location and race. The states with the largest evangelical populations (all with more than 40 percent of the total population) were Alabama, Arkansas, Kentucky, Mississippi, Oklahoma, and Tennessee—more liberal California and New York had much smaller percentages of evangelicals, only 20 percent and 10 percent respectively. In last year’s Alabama Senate race, 80 percent of white evangelicals voted for the Republican candidate, while 95 percent of black evangelicals supported his Democratic opponent.

Gerson faults white evangelical voters for being too defensive, reactive, and narrow, for voting for Trump with his “distinctly non-Christian” values. Unlike the Catholic Church, which developed a well-thought-out social philosophy, evangelicals failed to do this, and Gerson thinks this has left them too susceptible to politicians like Trump who promised to look out for their interests.

In contrast to the narrowness that Gerson eschews, Pope Francis has urged Catholics to be open-minded, pragmatic, and work for the common good. Anyone reading his long climate encyclical from beginning to end, while perhaps not agreeing with all aspects of it, should conclude that it reflects this spirit and is motivated primarily by his deep Christian faith.