The Red Scare: A Grandparents’ Story that Seems All-too-Relevant in the Age of Trump

Jeremy A. Stern (Ph.D., Princeton University) is an independent historian and history education consultant. He blogs here, where a longer version of this piece is posted. 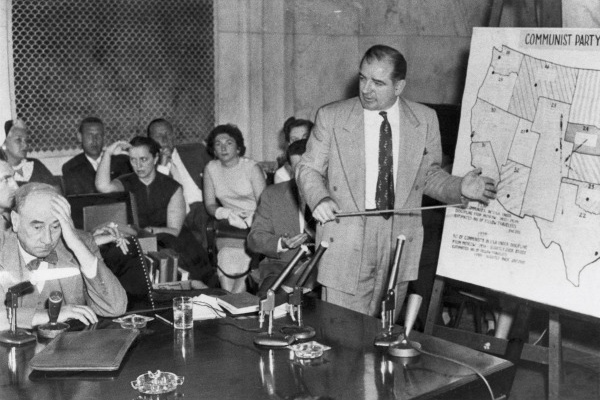 A prominent Cold War historian once insisted to me that McCarthyism had sharply limited reach, affecting only a handful of Americans. My uncle Walter (my mother’s much older brother) would have disagreed. He was of no obvious importance or prominence. Yet he and his family found they had been scrutinized, reported upon, and branded disloyal to their country. It is valuable, today, to remember the costs of government suspicion run amok ‒ the danger of “national security” giving cover to a police-state mentality.

Walter served on the front lines in WWII with the Army Signal Corps before pursuing an education through the GI Bill of Rights. He went to work producing electronic equipment for Columbia’s cyclotron lab. He also applied for a job with the Atomic Energy Commission (AEC). That in turn spurred a legally-mandated review of his “character, associations and loyalty.”

The result was one small episode in the 1950s Red Scare ‒ all-too-large for him and his family.

In July 1951, Walter was handed two pages of AEC accusations. Much attention focused on his parents, Israel and Fannie. Israel was a naive believer in Communist dogma, and a deluded admirer of an idealized Joseph Stalin. His sole outlet was the recorder’s post in a Jewish People’s Fraternal Order lodge, part of the larger International Workers Order (a Communist-leaning labor organization that provided insurance and workers’ benefits). Walter never shared his father’s passion for politics, or his attraction to Marxism. But he, too, had joined the JPFO (as he disclosed on his AEC questionnaire) to obtain health and life insurance. He left in 1947, since he no longer needed the insurance. Soon after, the AEC emphasized, the IWO was officially branded a subversive organization.

Walter and his family also registered with New York’s pro-union American Labor Party,1 which included conventional labor activists and Communists ‒ issues to which Walter paid little attention. The AEC, however, noted ominously that the ALP’s Manhattan and Brooklyn sections were said to be Communist controlled.

It was “reported” ‒ as a separate accusation ‒ that his father Isidor “has also been known as Israel.” “Israel,” redolent of Judaism and its presumed taint of leftist radicalism, was evidently felt to be worrisome in its own right ‒ particularly as a supposed “secret” identity. (Isidor was his name in English, Israel in Yiddish; as Walter would note in response, no “deception” was ever intended.) Walter’s sister Pauline and her husband Harry (secretary of Israel’s JPFO lodge) were accused of signing Communist Party nominating petitions.

Most frighteningly, the family learned they had been spied and informed upon. An unnamed source claimed to have seen the Communist Daily Worker and a “reportedly… pro-Communist” Yiddish paper in their apartment. It was further “reported” that in 1939 or 1940 his parents had “glorified and praised Russia,” that his mother had predicted Soviet conquest of America, and had boasted that “she and her husband had been ‘sent’ over here for a ‘reason’ which she refused to divulge.”

This letter instantly plunged the family into crisis. The details were kept from my mother, then eleven, but she could hardly escape the air of panic that gripped the small apartment. Fannie’s own childhood in Tsarist-ruled Vitebsk2 had been defined by fear. Not only did her family face anti-Semitic threats, they scrambled at any knock on the door to hide incriminating leftist books. Before she left for America in 1913, her father was chased down and killed by Tsarist troops; her younger brother was later gunned down during a Bolshevik demonstration. (Walter was named for them both ‒ a constant reminder.)3 Though she sympathized with leftist politics, Fannie had a lifelong paranoia at drawing attention or expressing public opinions.

Now, not only had Israel’s minor leftist fraternal activities drawn government attention, they were being reported upon by their neighbors. Fannie and Walter were sure the woman living below (a “nasty buttinski,” my mother remembers) had rooted through their garbage for newspapers and invented the pro-Soviet boasts out of sheer malice. (There was further reason to feel besieged: Walter’s best buddy also applied for government work ‒ and was informed that his friends Walter, Pauline and Harry were suspected Communists.)

It took two days after the “bombshell” for Walter to “cool off” enough to prepare a densely typed rebuttal. He had joined the JPFO for insurance benefits ‒ and had left months before it was declared subversive; he acidly added that he had “no inside sources” for “advance information.” He was unaware the ALP had been declared subversive, but being rather apolitical beyond voting, had no contact with its offices; he disliked some of its public “antics,” but liked the other parties even less.

As to his parents’ Yiddish papers, Walter could not read Yiddish. He had seen the Daily Worker in their apartment “about twice in the past twelve years.” He had rejected its shallow dogma, preferring “to form my own opinions after having the facts.”

The bizarre claims about his parents’ words ‒ made secretly by witnesses they could not challenge ‒ particularly infuriated him. His mother, he fumed, was known for abhorrence of war; she deeply feared a US-Russian conflict, in which “no one would be the winner.” “As to this business of being ‘sent’ here for a ‘reason’: when was this supposed to have occurred?” His parents came to the US by 1916, “definitely before any communist regime existed in Russia” ‒ and had since been, respectively, a cobbler and a housewife.

His father did believe “that it is improper for one man to live off the back of another.” But “I am not my father’s keeper.” Walter himself opposed Communism, put the individual ahead of the state, and supported a free market. He intended to advance in the electronics industry.

He readily saw the insinuation: since his father was “a minor official in a small section of a Subversive Organization” (currently busy building an old-age home), Walter would hand him nuclear secrets, bound straight for the Russian embassy ‒ though Israel barely had a grade-school education, Walter himself was not a nuclear scientist (he only sought to make their electronics), and knew from his army service the importance of discretion. (The AEC never mentioned Walter’s honorable military service.) He resented the suggestion that he would divulge information to foreign powers: not only was he a loyal American, but enemy attack would “blow me and mine off the face of the planet.”

Most of all, Walter insisted on his family’s right to do as they pleased without it defining him. He drew a pointed and cutting parallel between his government’s implied demand ‒ that he renounce or betray his family if their views were out of favor ‒ and the Communist tyrannies he was tacitly accused of supporting: “I frown on the evil practice” in Russia and China, “and I frown on it here.”

After a hearing in October ‒ he was allowed a lawyer, but of course could not afford one ‒ Walter heard nothing until early 1953, when he was informed that the board4 had unanimously declared him a security risk: though he had left the JPFO, it was not due to dissatisfaction with its “political leanings or philosophy”; he had remained in the ALP, “commonly thought” to be under Communist control in New York City; and he refused to accept government rulings that such groups were subversive unless they committed openly subversive acts.

His parallel between Communist tyranny and demands that he renounce his family went entirely unnoticed. He was branded unreliable due to his “close association with members of your family” who remained in the JPFO and “who may have supported the Communist Party”; his “unwillingness to consider attempting to dissuade your family” from Communist opinions; and his insistence “that even if members of your family were Communist Party members, it would not be your responsibility.” The AEC conceded there was “insufficient evidence” that his parents or relations were Communist Party members (in fact there was none), but ALP membership was enough. And Walter “had the Daily Worker or Sunday Worker in your home.” (They did not say when, or how often.)

The AEC found “insufficient evidence” that Fannie had boasted of a secret Russian mission ‒ but, citing no source, they found it “probable” that she had declared conditions under the Soviets better than under the Tsar. Fannie knew far more of Tsarist conditions than the AEC ‒ but she still would never have volunteered such an opinion outside the family.

Walter was luckier than many others who fell afoul of the Red Scare. He kept his job at the Columbia lab and his place at Brooklyn Polytechnic’s night school. He soon moved to the commercial sector. Among other things, he designed radiation detectors for uranium prospecting.

But the family was left scarred. My mother still darkly remembers the climate of fear and suspicion, her parents and older siblings discussing it all in angry whispers. They knew they were being informed upon, that Walter was tainted by the opinions and minor political activities of his relations.

My grandparents had fled Tsarist Russia to escape persecution for their ideas and their Judaism. They found a far freer nation ‒ but also reminders that freedom is not always secure, even in America.

1 Like other small New York parties, the ALP endorsed major-party candidates: mostly Democrats, some Republicans, and Henry Wallace for president in 1948. Under increasing attack for suspected Communist infiltration, the party disbanded in 1956.

2 The artist Marc Chagall, who immortalized Jewish Vitebsk, was an older cousin through Fannie’s mother.

3 His full name was Abraham Walter ‒ named for Fannie’s father Avram and her brother Wolf.

4 The hearing board consisted of a New Jersey lawyer, a distinguished chemist who had worked on the Manhattan Project at Columbia, and an AEC representative.