Anthony Toth is a writer and historian in Arlington, VA who took part in the Women’s March, along with his two daughters and a few million others. 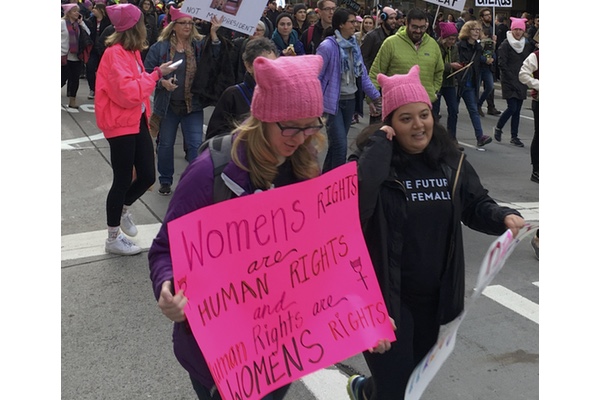 Who would have guessed that the largest one-day protest in American history would have as its most recognizable symbol a fuzzy pink cap with cat ears?

The Women’s March took place on January 21, timed as a decisive counterpoint to the inauguration of Donald Trump the day before. The millions who participated were responding to the ominous rhetoric of intolerance, exclusion and bigotry of the GOP standard-bearer during his campaign and afterward. As they aired their messages of love, equality, kindness and hope, multitudes of marchers wore the pussyhats, creating rivers of pink from coast to coast and around the world.

Most of them were made by hand, and they signified in a strikingly symbolic manner many things to many people: solidarity, defiance, generosity and connection. The pussyhat also formed the latest link in a long chain of feminist history in which clothing, textiles and jewelry have been employed to further the cause. In the Women’s March, the stories of what they wore were as numerous and varied as the women.

There was Laureli Ivanoff, a mother, writer and fish-cutter living in Unalakleet, Alaska, population 700. On the day of the march it was -51 F in this coastal village a few hundred miles south of the Arctic Circle. But she was eager to step into the biting cold. She described beloved pieces of jewelry as she donned them one by one as if they were bits of spiritual armor, girding her for battle. Each item carried a story of connection: pink and fuchsia earrings made by her daughter; caribou antler earrings from her sister; a baleen bracelet from her father; and a stone bracelet from Paniisaq, her departed, beloved grandmother. “I have the strength of the strongest women inside of me,” Ivanoff wrote. “Behind me. Before me.”

The last bauble was a beaded bracelet with a peace sign, made by her daughter, which reminded Ivanoff that love and life both come full circle. Some day, she hopes her daughter receives all these bracelets. “And I pray with determination all the way to my marrow,” she wrote, “that she receives all that I have and more. We are women.” Ivanoff’s pre-march ritual mirrored the actions of women before her, who in earlier years had donned buttons, pins, medals and brooches that signified commitment to the cause of equal rights.

And before heading out the door to join some 38 villagers in the march she grabbed her pink pussyhat.

Those who marched in Unalakleet were united in spirit with others in hundreds of marches in the US and around the world. They wore pussyhats and jewelry and other symbols of strength and solidarity, and carried signs supporting reproductive rights, the environment, immigrants, minorities, equal pay and LGBTQ rights. While many marchers felt the need to defend against positions voiced by the Trump campaign, a major spark that set this popular outpouring ablaze was not so much specific issues as the demeaning and predatory actions of Trump as exposed in the notorious “Access Hollywood” recording.

Women (and men) were raising their voices against the coarseness, crudeness and callous bragging about sexual assault that was on full display by the GOP candidate during his reality television glory days. Trump said that because he was a “star,” women let him do anything, including “grab them by the pussy.” After the leering man on the bus was elected president, legions of women and their supporters wanted to show that enough was enough.

Enter two young women from Los Angeles. When Krista Suh heard soon after the election that a march was being organized in Washington, DC, she was sure she wanted to be part of it, but she wanted to do more than just carry a sign. She shared a love of knitting and crocheting with her friend, Jayna Zweiman, and the friends decided to make cat-themed pink hats to ward off the winter chill expected at the march – turning Trump’s gross phrase on its ear, as it were. Since Zweiman could not travel to the DC, she made a hat for Suh, who reciprocated by making Zweiman’s hat.

Zweiman told People magazine that the project allowed her and others to take part in the day of protests even though financial, medical or other reasons would keep many at home. The thousands of knitters and crocheters could “send in hats as well and be a part of this whole process,” she said. “Krista and I really represent both sides of this project: the people who want to be there but can’t, and the people who are marching on behalf of all of us,” she added.

Word spread like wildfire, and soon the Pussyhats Project was born, with marchers and their supporters creating a nationwide run on pink yarn for the thousands of hats that would eventually be made. Suh and Zweiman chose pink because it is “considered a very female color representing caring, compassion and love.” On their web site, which also had instructions for making the hats, they added: “Wearing pink together is a powerful statement that we are unapologetically feminine and we unapologetically stand for women’s rights.”

In Washington on the day of the Women’s March, the pussyhats were everywhere, keeping heads warm while making a statement and expressing a sense of connection. People started arriving well before dawn’s early light, in waves of dozens, then hundreds, then thousands, converging on the National Mall on foot down streets and up from Metro stations. Many already had their pussyhats; others received them from people handing them out, many with a small form telling the recipient who made the cap, what women’s issue she (or he) cared about, and contact information in case the recipient wanted to send a message to the maker.

There were women’s marches in every state and on every continent, even Antarctica. As daylight circled the globe on January 21, 2017, millions raised their voices, waved their signs and took steps toward supporting causes they felt would make the world better. And the ubiquitous pussyhat became a powerful thing that many wore to show that they were in this struggle together. 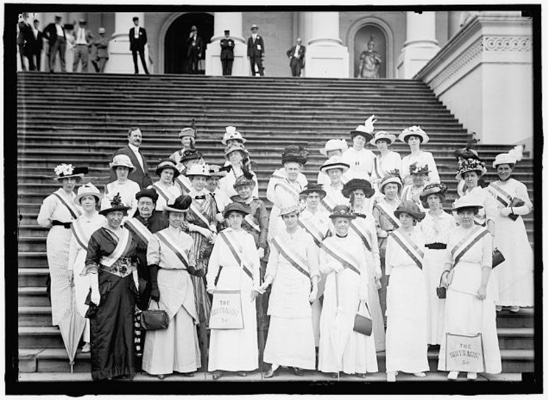 Suffragists in white at the U.S. Capitol, c. 1914. Library of Congress Photo Collection.

Some women at the Washington march and elsewhere paid homage to earlier generations who fought for equality by dressing as suffragists. The founding event for the movement for equality for women was a convention in 1848 in Seneca Falls, New York, organized by Lucretia Mott and Elizabeth Cady Stanton. This small gathering gained support over the years, and in the early part of the 20th century was characterized by meetings, rallies and marches where the color of choice for suffragists’ dresses after about 1908 was white. Gold was also used, inspired by the sunflower, the state flower of Kansas, where Stanton and Susan B. Anthony had led a statewide campaign for women’s suffrage in 1867.

Thus white became the color that united women across the years in their efforts to attain equal rights. At the 1916 Democratic National Convention in St. Louis, for example, suffragists in white dresses wore gold sashes with the words “Votes for Women,” and held aloft gold-colored umbrellas as they stood shoulder-to-shoulder along the route leading to the event. Shirley Chisholm wore white in 1969 when she began her term as the first African-American women in Congress, and then again as the first African-American woman to run for president on a major party ticket in 1972. Geraldine Ferraro wore white when she accepted the nomination in 1984 as the first women on a major party ticket. And Hillary Clinton gave a nod to her feminist predecessors when she wore white on a number of occasions, including the day of her selection in July 2016 as the Democratic party’s presidential candidate.

For the moment, pink may be the new white. But while colors and fashions inevitably change with the times, there will always be those who employ the things they wear as part of the language they use to express the struggle for equal rights. These hats, dresses, pantsuits and bracelets can speak volumes, and symbolize connections with those living, those long gone, and those yet to take up the cause.