This page features quotations from hyperlinked sources.  Quote marks are not used. 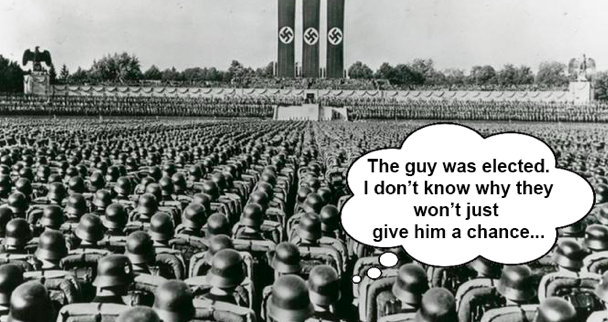 Related Link Hitler in the 2016 Election

No, Trump Is Not Hitler — Here’s Why. The Forward (By Simi Lichtman)

Trump is not Hitler. But I do find myself thinking back to the lessons those books taught me and, perhaps more importantly, the questions they raised. Questions that have followed me throughout the years, tugging at me every so often to remind me that they have yet to be answered. Questions that, today, I find myself viewing with new eyes.

I keep returning to one question in particular. Why, I often wondered, with all the policies being enacted over the years leading up to the implementation of the Final Solution, did more people not leave? Why did so many people, German Jews in particular, put up with so many laws curtailing their lives, demeaning their existences, until the day where it was that very existence that was demanded and summarily claimed?

At [Steve] Bannon’s urging, Trump ... calls Germany, with chancellor Angela Merkel answering the phone and saying frantically, “Hello? Is this my sweet Barack? Barack Obama, I miss you!” before recoiling in disgust upon realizing that she’s speaking to Trump.

Trump insists on making some remarks about Holocaust Remembrance Day, but rather than mentioning the genocide of six million Jews, talks about how six million people watched his inauguration and were ignored by the media.

He then says he intends to write a book about his struggle, called “My Struggle”, much to Merkel’s horror (the title of Adolf Hitler’s 1925 book Mein Kampf translates to “My Struggle”).

Trump is not Hitler so stop demonising him, Boris Johnson says Business Insider

US President Donald Trump's critics should stop trying to "demonise" him, UK Foreign Secretary Boris Johnson said Monday, rejecting what he called "distasteful" comparisons between the US president and Hitler.

Johnson leaped to Trump's defence on Monday afternoon after being urged by members of Parliament to withdraw the UK's invitation to Trump for a state visit.

In a debate in the Commons, Labour MP Dennis Skinner compared Trump to Mussolini and Hitler and urged Johnson to "ban" Trump from visiting.

"Will the foreign secretary just for a moment try to recall along with me as I hid underneath the stairs when two fascist dictators Mussolini and Hitler were raining bombs down on towns and cities in Britain," Skinner said.

"Now this government is hands in hand with another fascist Trump. What I say to him is do the decent thing and ban the visit."

Johnson mocked Skinner's suggestion that Mussolini had bombed the UK before adding, "I do find it distasteful to make comparisons between elected leader of a great democracy and 1930s tyrants."

From the left come the cries – Donald Trump is the new Hitler! His “America first” slogan has Nazi undertones! He hates Hispanics, Muslims and gays as much as Hitler hated Jews!

But Anita Dittman lived through the Holocaust as a Jewish girl in Germany during the 1930s and 1940s, and on this International Holocaust Remembrance Day, Jan. 27, she has a message for those who think Trump is the American Hitler.

“When they say he is another Hitler, they are crazy,” Dittman told WND in a phone interview. “If he was another Hitler, he’d be shooting people that riot, and they wouldn’t have the freedom to riot. If anybody was against things in Nazi times, they would ship them off to the ovens, as we called the camps. There was no freedom.”

“When I saw today’s gathering of the Republican Party retreat, Trump being there reminded me of Hitler addressing the Nazi Party,” Fox told CNN International. “I think it’s important to remind Congressmen with the Republican Party that fall on their responsibilities —”

It was then that the CNN International host stopped former President Fox to clarify if he actually was comparing Trump to Hitler.

“Not in that sense,” Fox clarified. “I am comparing him in the sense of the way he’s a populist, of everything that he said is pure populism, making America first. Number two, that he says jobs for everybody, what he says, business for everybody. I mean, his declarations, his creeds and his executive orders. Yes, I want to remind a Congressman is obliged with this free conscious to make decisions he doesn’t have to accept, but this guy is important to them.”

In 1984, we learned the official slogans of the party: “War is Peace. Freedom is Slavery. Ignorance is Strength,” only slight parodies of communism and Nazism.

“Freedom is Slavery” was not far from the infamous greeting at the gates of Auschwitz, “Arbeit Macht Frei.”

And “Ignorance is Strength” seems to be Donald Trump’s credo and operating premise—ignorance for both himself and his public.

Orwell’s target was the prettified euphemism, used mostly by extreme left-wing and right-wing parties and governments. If people could be persuaded to accept the reframing, they might well alter their conception of reality.

When he said today ‘America First,’ it was not just the racial—I mean, I shouldn’t say racial, the Hitlerian background to it, but it was the message I kept thinking what does [British Prime Minister] Theresa May think of this this morning when she picks up the papers and says oh my God, what did he just say.