Hitler Analogies in the 2016 Election

On this page we are keeping track of references to Hitler in the current election.

"So Jews were otherized in Nazi Germany to gain political power for Hitler, and right now Donald Trump is doing the same thing. He's etherizing."  – Jill Soloway at the Emmys

"Not Hitler or Augustus, but a hybrid that shows what the American polity is becoming" — Jim Sleeper

"Radio Host: Trump as Hitler Not as Bad as Hillary's Image Problems"

"If Donald Trump is going to win the general election, he's going to have to prove to the public that he's not Adolf Hitler, which is going to be easy for him to do." — KABC's John Phillips

"Sanders:  'I did not compare Trump to Hitler' ” — Headline in the Jerusalem Post

"No, Trump Won’t Be Another Hitler" — Headline in the conservative American Thinker

"I never had the book [Mein Kampf]. I never read the book. I don't care about the book." — Donald Trump comment to Maureen Dowd, denying claims by his ex-wide that he kept a book of Hitler's speeches by his bedside and that he read Mein Kamp

“As the grandson of a Holocaust survivor, I’m sorry that this needs to be said, but: Although the candidate has said a number of disgusting things, the comparison to Hitler is far too facile — so facile that it is dangerous.” — Jonathan Greenblatt is CEO of the Anti-Defamation League

"Nazi salutes and Weimar pastiche. Debates laden with references to Mossadegh, Allende, Cambodia, and the Sandinistas. Gaffes about Nancy Reagan. Discussions of George Wallace. Decades-old legislation. Have we ever had a presidential campaign so saturated in history, not just of the US but of other parts of the world? I feel like we're watching history unspool, in a completely chaotic, unedited way. It's as if we're at one of those sumptuous and feverish Viennese balls from the turn of the century, and every ghost from empires past has shown up to dance. What's going on? Joseph Roth, where are you?" — Corey Robin 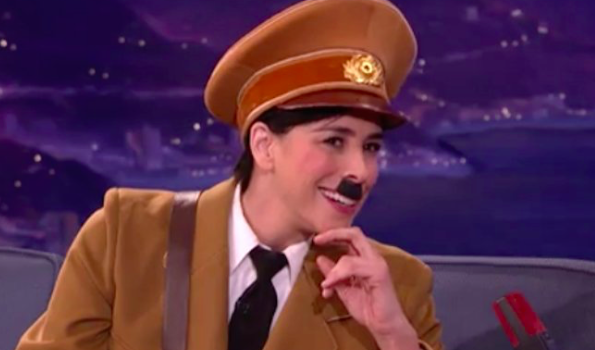 "Donald Trump Is Linked To Hitler Over 2,500 Times Every Day.  Twitter users mentioned the GOP front-runner alongside the leader of Nazi Germany more than 700,000 times since June." — Headline in Vocative 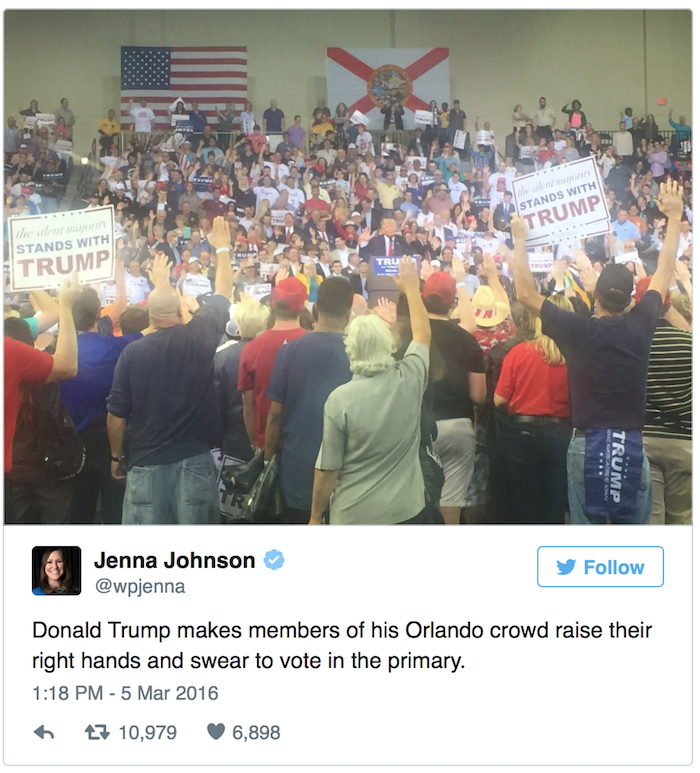 "Donald Trump on Tuesday addressed criticism of a new practice at his rallies that has been compared to the "Heil" salute from Nazi Germany, dismissing the controversy as "ridiculous" before saying he would look into ending it." — CNN

"While Americans can joke about “Soup Nazis” and Hitler mustaches, Germans know firsthand what it means when a failed businessman moves from a fringe candidate to a leader who takes over your democracy and burns everything to hell. I learned this, repeatedly, while I was in Germany for a weeklong lecture on the 2016 U.S. presidential election hosted by the State Department and German officials. As I hopped from one beautiful, Old World city to another, from Hamburg to Frankfurt to Munich to Berlin, every person I spoke to said that the rise of business mogul-turned-reality-TV star-turned-GOP front-runner Donald Trump reminded them of the early stages of Adolf Hitler’s rise to power." — Jason Johnson, in The Root

"When Adolf Hitler Did It ... People Just Wanted Somebody To Solve Their Problems" — Glen Beck, commenting on Trump's plan to ban Muslims from America.

"Goose-Steppers in the G.O.P. : Well, he’s got the Hitler vote. The neo-Nazi website, Daily Stormer, was out and proud earlier this week: 'Heil Donald Trump — the Ultimate Savior.' After endorsing the Republican presidential front-runner earlier this year for his call to deport 11 million Mexican immigrants, the fomenters of American fascism have now added an apt twist to his slogan, one not far from the truth of the campaign: 'Make America White Again.' " — Column by Timothy Egan in the New York Times

“Trump not bothered by comparisons to Hitler” — Politico headline

“I think the likelihood of Hitler being able to accomplish his goals would have been greatly diminished if the people had been armed.” — Ben Carson, quoted by the Washington Post.

“Hell yeah, I would!” Jeb declared when asked if he would, in fact, travel back in time to kill baby Hitler. “You gotta step up, man.” — Jeb Bush, quoted in Salon