Stephen J. Pyne is a historian in the School of Life Sciences, Arizona State University, and the author most recently of Between Two Fires: A Fire History of Contemporary America and To the Last Smoke, a series of regional fire surveys.

A fire begins in wildlands. It burns through a shocked countryside. It blasts into a town that, if old, had not known such burns for a long time and, if new, had never experienced anything so savage. Embers kindle new fires far ahead of the front, flames leap from house to house. Until the winds die, fire protection forces are helpless. A postmortem points to contributing factors that residents believed had been expunged from vernacular landscapes. Now they have returned, like a re-emergent plague. 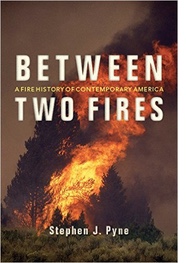 The Chimney Tops 2 fire that rushed out of Great Smoky Mountains National Park and ripped through Gatlinburg, Tennessee and clawed to the borders of Pigeon Forge on November 28 is novel only in its time and place. Thanks to a tenacious drought, it occurred outside what is regarded as the normal fire season. It ripped over a landscape that has not known fires of this sort for a century. It's the kind of fire that happens somewhere else. Only this year it came to Gatlinburg.

The American fire community once knew burning communities as a rural fire problem, most explosively associated with frontier landclearing. In the post-WWII era, cities and suburbs sprawled across the countryside. The buffer between the wild and the urban shrank until, in places, no buffer existed. The first expression of the new fire was probably the 1961 Bel Air-Brentwood conflagration that burned in Los Angeles. Here exurbs had pushed into brushy hillsides.

In 1986 the problem received an official if geeky name, the wildland-urban interface fire, coined in California. The U.S. Forest Service and the National Fire Protection Association joined in a national campaign to alert the public about the menace and about the measures communities needed to take to protect themselves. Initially, it tended to be defined primarily as a wildland problem because that's where most of the fires came from.

But observers could as easily have picked up the other end of the stick and defined the problem as an urban one, with exurbs built without regard to zoning and houses erected without regard to codes. The vulnerable places were patches of cities with peculiar landscaping. In 1991, America experienced its worst urban conflagration since the 1906 San Francisco earthquake as fire poured through the Oakland Hills across the bay. Here the problem was a thickening of vegetation in open space next to and within a long-established town.

Still, it seemed a California quirk. And then it wasn't. Wildfires began taking out houses in Arizona, Montana, Colorado, Oklahoma, Washington, and in 2011 Texas, on a monster scale—all places where Americans were living, as in California, on an edge between the feral and the tame. But fires were also boiling over in Florida, where developments pushed inland into some of the most fire-thirsty biotas in North America. They began spreading across the coastal plains in the Carolinas and Georgia. In 2007 fires broke out of a droughty Okefenokee National Wildlife Refuge and threatened the surrounding countryside. The bad burns were no longer quarantined on the West Coast or the semi-arid, semi-empty landscapes of the West. They were even moving out of the coastal plains for the mountains. A widening sprawl was colliding with worsening sparks.

The narrative changed. For decades it was convenient to treat those outbreaks as a freak of western violence, like a grizzly bear attack. The prevailing narrative was one of dumb westerners building houses where the fires were. Now the fires seem to be going where the houses are. The National Association of State Foresters reckons that 79 percent of America's communities at risk lie in the South.

We won't know all the contributing causes to the Gatlinburg blaze until the pyric postmortem is complete. It may be that the Chimney Tops 2 fire was a low-probability, high-cost event that was ever latent yet unlikely. But widen the aperture a bit—think on longer axes of space and time—and the odds seem less extreme.

The southern Appalachians have long known fire. The record from both ecology and scarred trees testifies to a regular regimen of surface burns. Then large-scale logging and slash fires swept over the mountains in the late 19th and early 20th centuries. The 1911 Weeks Act that allowed the young Forest Service to expand by purchasing new lands had in its crosshairs the wrecked watersheds that followed industrial-strength slash and burn in the southern Appalachians. National forests were acquired patch by patch. The Great Smoky Mountains were set aside as a national park in 1934.

Slowly the land recovered. Fires were fought. The forests regrew. The memory of expansive burning and big blowups passed. The economy shifted from production to services, from working landscapes to amenity communities. New villages sprouted, old ones were reborn. The rural countryside that had once burned often but had lots of workers to hold fires in check gave way to exurban hamlets, tourist attractions, overgrown woods, and lessened capacity. If the West was an interface, with sharp boundaries between public and private land, the Southeast was more of an intermix, an omelet of town and country, new and old. Now climate change promises to further juice the prospects for bad fires.

If unchecked what unfolds will follow the early California example before the state learned what had to be done. But there is no reason why the East cannot pick up the good practices instead of the bad. It can begin with what the West has learned over the past 50 years of surprises that should have surprised no one. It can happen here.

Most of the larger environmental forces are aligning in ways that promise to worsen the scene. There is not much we can do immediately about global climate or the national economy, or can only tweak them slowly, nudging them to better outcomes. Meanwhile, we can harden houses, strengthen defensive buffer zones, bolster firefighting capacity, and reinvent a working landscape to hold a new middle ground. Otherwise the rough beast of the western fire scene will continue to slouch eastward.