Andrew Young is the author of Unwanted: A Murder Mystery of the Gilded Age (2016). 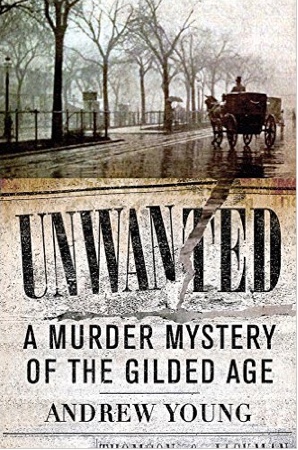 In the last days of January 1896, a young woman stood at the Greencastle, Indiana rail station waiting for her train. Her cousin Will was with her. He was only a few years younger than her, but they had become close. He was the only one in Greencastle that knew her secret. She was not going to Indianapolis as she had informed her parents and siblings. Instead, she carried money she had saved and was headed to Cincinnati, Ohio to get an “illegal operation,” an abortion. Her name was Pearl and she was about four or five months pregnant at the time. Her former lover was a dental student who was sometimes called Dusty. He lived in Cincinnati and it was presumed that he was the father of the child, though he would later claim that Will was the father. Dusty had arranged an abortion for Pearl by a willing doctor. As her train left the station, she was unaware she would never see her home again. On February 1st her headless body was found in a cold field. Her head was never recovered.

Most women, surely, did not suffer Pearl’s fate, but abortions were a risky business in the nineteenth century all the same. Abortion has long been a hot topic in presidential debates. This season, despite the heated rhetoric on both sides, abortion has been relatively ignored. Republicans, for decades, have been consistently Pro-Life, while Democrats have long supported Pro-Choice sentiments. Donald Trump, in the past, has said he was pro-choice, but then, when faced directly with a question on his stance on abortion he proclaimed that abortion should be illegal and that the woman seeking the abortion should be punished. It was a typical response from Trump in which he tried to feel his way through a response and managed to make a glaring mistake. Someone on his staff must have explained that no one argued that the woman should be punished; only the doctor who performed the operation should be. Trump quickly withdrew the idea of punishing the woman and, instead, he said he would punish the doctor.

Of course abortions have always been a part of American history, though we have often simply ignored them. The study of abortion in the nineteenth century reveals much about how illegal abortions can be much more damaging to society and individuals than the modern safe procedures we have in many states today. Doctors were performing abortions long before our country was founded. Early Puritan records show cases where doctors were accused of performing these illegal operations, but often a doctor simply left the village if caught.

In the 1800’s there were “abortionists” all over the country, some were well regarded and supposedly visited by some of the most wealthy and prominent women in the country. Others were butchers with no training. Since no records were kept and a coroner might not recognize the signs of a botched abortion (or might simply want to save the reputation of the woman’s family), there is no way to know how many women died. It was a known issue and I think it speaks to the mores of the time that a woman would face the chance of death in order to end an unwanted pregnancy.

There were other choices as well. Companies advertised contraptions and medication that was supposed to induce a miscarriage. After the introduction of the Comstock laws and all the states copies of those laws, the companies advertising these goods had to be discreet. Suddenly a wide variety of “wife helpers” and “cleansing” products were found in newspapers, and they must have seemed strange to anyone who couldn’t guess at their purpose. The women in a house of ill repute in Indiana always douched with carbolic acid after their client left, believing that it would get rid of possible venereal disease and rid the area of sperm. Though they suffered serious side effects of this, they continued the practice. Upper class women, if they believed they were pregnant with an unwanted child, would sometimes go on frequent horseback rides in the belief that riding might lead to a miscarriage.

Since abortions were such a taboo subject in the nineteenth century there is no way to know the number of abortions and their outcomes. Yet, it is clear that it was common enough. When Pearl’s post-mortem found the pregnancy and the doctor who performed it told the press he was sure she had come to Cincinnati to have an “illegal operation,” there was no surprise or shock from the public. Those who are working to, once again, make abortion illegal, would be wise to consider previous circumstances.