Why I Miss the Kennedys 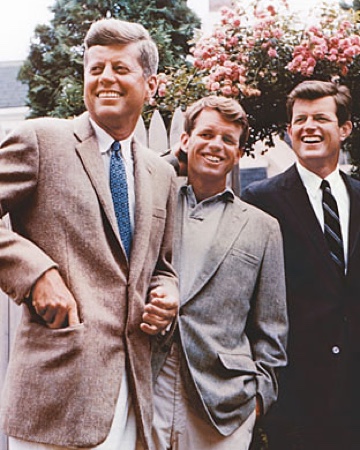 Mere anarchy is loosed upon the world,

The blood-dimmed tide is loosed, and everywhere

The ceremony of innocence is drowned;

The best lack all conviction, while the worst

Are full of passionate intensity.

I just finished reading Charles Blow’s “The End of American Idealism.” Near its end, he asks, “How long can the center hold?” That sentence and his gloomy perspective reminded me of Yeats’s poem. His column also made me nostalgic for the Kennedys. John Kennedy was the first president I voted for. I supported Robert until his 1968 campaign ended so tragically with his assassination. And I greatly admired their brother Ted’s combination of liberal idealism and ability to work productively with his Republican colleagues in the Senate.

Compare the idealism that all three brothers personified with Blow’s gloomy assessment of the present presidential political contenders and the dysfunctional state of U.S. politics. He characterizes the five leading candidates for president as “the demagogue from New York, the political arsonist from Texas or the empty suit from Florida.” He continues: “On the Democratic side, the leading candidate is a hawkish political shape shifter, too cozy with big money . . . and who most Americans don’t trust. . . . Her lone opponent is a self-described democratic socialist who seeks to cram sweeping generational changes—hinged on massive systemic disruptions and significant tax hikes—into a presidential term. And he says that he will be able to do this with the help of a political revolution, one that has yet to materialize at the polls.”

Blow’s assessment of the state of our country is no cheerier. He writes of our “gun violence and mass shootings”; our world-leading mass incarceration, where “more than 60 percent of the people in prison are now racial and ethnic minorities”; an educational system that “leaves far too many without access, underprepared or drowning in debt”; our shrinking middle class; an infrastructure (including crumbling bridges) being in shambles; our “fundamentally flawed or deeply broken institutions”; our “broken” government; “a legislative branch that increasingly sees its role as resistance rather than action”; a Supreme Court that has swung “the door wide open to allow to the ultrawealthy to have nearly unlimited influence on the electoral process”; and a government that has failed to deal adequately with immigration reform or global warming.

In dealing with foreign threats, “We are a country stuck in perpetual warfare that is now confronting the threat of the Islamic State terrorist group.”

Is it any wonder that I remember fondly a time when our problems seemed more fixable and the Kennedy brothers offered us more hope? Granted I was younger then and probably more naively idealistic and optimistic, but it was not just me. Many of the other supporters of John and Robert Kennedy in the 1960s shared my idealism—more about Ted later. A quick glance at a few books on hand on or by John and Robert—Theodore Sorensen’s Kennedy, Arthur Schlesinger’s Robert Kennedy and His Times, and RFK’s To Seek a Newer World—reminded me why their idealism was so appealing.

As one of Kennedy’s main speechwriters and advisers, Sorensen knew JFK well. He admitted that his boss was a “pragmatist,” who emphasized doing the possible, but added that “he had a strong streak of idealism and optimism as well.” On other occasions he referred to JFK’s unique “brand of energetic idealism and common sense,” his “fervent idealism,” and the creation of his most idealistic program, the Peace Corps, whose members were the “nation’s most effective ambassadors of idealism.” A good sample of President Kennedy’s mix of idealism and realism can be gained by listening to his most important “peace speech,” his 1963 Commencement Address at American University.

If JFK stoked the youthful idealism of my generation, the empathy which RFK displayed for poor white Appalachian kids, for Chicano or Mexican-American migrant farm workers, or for discriminated blacks touched many of us even more deeply (see, e.g., his words upon the death of Martin Luther King, Jr.). An earlier HNN article on RFK observed that “not since Lincoln had black Americans embraced a white politician as passionately and completely. They, as well as many whites, feared that Robert Kennedy’s assassination, like Lincoln’s, had eliminated the only leader who could heal and unify a wounded nation.” The tremendous outpouring of men, women, and children of all colors, shapes, and sizes as his funeral train moved slowly along from New York to Washington, D.C. symbolized how much he had moved so many people.

Like Sorensen, Schlesinger, a prominent historian, worked for JFK, and he later campaigned for RFK and Ted Kennedy. In a new Forward to the 2002 edition of his RFK biography, he wrote that Robert Kennedy “joined idealism in his purposes with realism in his methods. He was a man of passionate conviction. He was at the same time a tough and experienced politician who understood the uses of power and government.” In addition, Schlesinger cites RFK’s words that whoever “stands up for an ideal, or acts to improve the lot of others, or strikes out against injustice” can make a significant difference.

Schlesinger also quotes a South African newspaper referring to RFK’s impact on his trip to that country in 1966: “this younger Kennedy . . . has taken the youth of the country by storm through his message of confident, unashamed idealism.”

The title of RFK’s 1967 book, To Seek a Newer World, comes from one of his favorite poems, Tennyson’s “Ulysses.” On p. 1 he wrote: “In the Peace Corps, in the Northern Student Movement, in Appalachia, on dusty roads in Mississippi and narrow trails in the Andes, this generation of young people has shown an idealism and a devotion to country matched in few nations and excelled in none.” Later on he added: “To take up the challenge our young pose to us, we must remember that idealism and morality— in politics, and in the conduct of our lives— are not just a hope for the future, and must not be a thing of the past.”

In the last few pages of his book he quoted words he had first spoken on his 1966 South African trip at the University of Cape Town. “But if there was one thing President Kennedy stood for that touched the most profound feelings of young people around the world, it was the belief that idealism, high aspirations, and deep convictions are not incompatible with the most practical and efficient of programs—that there is no basic inconsistency between ideals and realistic possibilities, no separation between the deepest desires of heart and of mind and the rational application of human effort to human problems. It is not realistic or hardheaded to solve problems and take action unguided by ultimate moral aims and values.”

Although Ted Kennedy seemed much more of a lightweight when he first entered the Senate in 1962, he gradually developed into one of that body’s most liberal and effective senators. Shortly after his death in 2009, his good friend Republican Senator Orrin Hatch had this to say:

We did not agree on much, and more often than not, I was trying to derail whatever big government scheme he had just concocted. . . . Ted was a lion among liberals, but he was also a constructive and shrewd lawmaker. He never lost sight of the big picture and was willing to compromise on certain provisions in order to move forward on issues he believed important. . . .

We can all take a lesson from Ted’s 47 years of service and accomplishment. I hope that America’s ideological opposites in Congress, on the airwaves, in cyberspace, and in the public square will learn that being faithful to a political party or a philosophical view does not preclude civility, or even friendships, with those on the other side.

When reflecting on my dear friend’s life, my thoughts continue to turn to the future of this great nation. With the loss of such a liberal legislative powerhouse who spoke with conviction for his side of the aisle but who was always willing to look at an issue and find a way to negotiate a bipartisan deal, I fear that Washington has become too bitterly partisan.

What was admirable in the three Kennedy brothers was that proper combination of idealism and realism that each of them, in different combinations, possessed. The brothers also avoided the trap of being rigid ideologues, another necessity if a politician hopes to exercise political wisdom.

Although I agree with Blow’s negative assessment (see above) of the three present Republican presidential candidates, I also fear that his lack of enthusiasm for either Democratic candidate is justified. Neither possesses that proper combination of inspiring idealism and political skills that the three Kennedys possessed. Bernie Sanders may inspire youthful idealists, but has he displayed the political and administrative skills necessary to make a divided nation whole? And is the distrust that many feel toward Hillary Clinton completely unwarranted? Is she too hawkish for progressive liberals? Whereas Robert Kennedy opposed President Johnson’s Vietnam policies in 1968, and Ted Kennedy those of Bush justifying the Iraq invasion of 2003, Senator Hillary Clinton voted for that invasion and remains more hawkish than President Obama.

For more than a half century I have heard a plethora of criticisms of the Kennedy clan, some of them well deserved, others not; some true, and some false or unsubstantiated: Jack was a womanizer, and often a careless one at that. He did not really get much through Congress and escalated our Vietnam involvement. One of my conservative friends always told me how ruthless Bobby could be and that he was somehow implicated in Marilyn Monroe’s murder (of course, he offered no proof). And how about Teddy and the Chappaquiddick incident in 1969, which ended the life of a young woman in the car he drove off a bridge? How about his drinking problem?

In answer to all these criticisms and questions I can only say that regardless of the truth or falsity of any of them, the proper combination of idealism and realism is necessary and the Kennedys did at times display such a mix. Besides, whoever said nostalgia had to be completely rational?

Furthermore, I would not deny, as Dick Cheney claimed, that President Reagan was very idealistic, or that he could also mix realism and idealism effectively, as he did in dealing with Mikhail Gorbachev’s initiatives to end the Cold War. Although many of Reagan’s ideals and priorities were different than mine, the present top three Republican presidential candidates are making him look better and better in comparison.