It’s Time to Rethink the Way We Memorialize Terrorist Attacks

Terrorist attacks have of late become an alarming way of life. Paris and San Bernadino, California made headlines but these are just the most recent. Tomorrow there may be another one. In their wake they leave a badly shaken populace with what by now seem prescribed responses: the creation of temporary memorials at the site; reassuring words from leaders as well as talks of war; public demonstrations; and rightwing political gains fostered, it is believed, by fear. 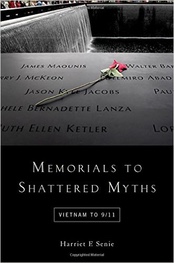 Typically terrorist attacks have targeted symbolic sites (a federal building in Oklahoma City, the World Trade Center in New York, Charlie Hebdo headquarters) or places of personal distress for the perpetrators (typically work or school). But in Paris the attacks were seen as targeting a way of life (a café, a concert venue, a sports stadium) in a diverse working class neighborhood seen by many as hip. And the San Bernadino attack appears to have been perpetrated by a married couple with a six-month-old baby who had long harbored terrorist plans, apparently working on their own.

Muslims have become criminalized (again) as they were after 9/11. Donald Trump, running for the Republican nomination for President of the United States, called for a ban on Muslim immigrants (even though the couple in San Bernadino were Americans), and in France Marine Le Pen enjoyed a brief political victory for the National Front in the first round of regional elections. So now we are talking about two kinds of victims: those killed in the attacks and, in a different sense, those belonging to the group that caused the attacks. The subject of memorials, of course, is always the former, and our strategy thus far has been to turn them into heroes.

After any unexpected sudden death (think of the death of Princess Di) the immediate response for many has been to rush to the site of death and leave flowers, candles, notes, banners with signatures and slogans, pictures of the deceased, and stuffed animals if children were involved. Often dismissewd as makeshift, these material responses seem to aid a shocked and grieving populace, creating a sense of community. And there is comfort in that. These immediate memorials are our first response, and non-perishable elements left at them (often relics of those that died) are typically preserved in local museums and historical societies. This gathering together and leaving of objects mimic cemetery rituals that are by definition private affairs for those who knew the deceased.

In developing the lasting memorials to the terrorist attacks at Oklahoma City, Columbine, and 9/11 in the U.S. there has been a valorization of the victims and by extension their families who have taken a significant role in creating the permanent memorials. This is a questionable practice at best. The sudden death of a loved one (or even an expected end) is not a time when people can take the long view. Their energies and insights might better be put to creating an intermediate memorial, something that would address their needs between the time of the event and the completion of a permanent complex.

The victims should be honored, but if they are the main (and sometimes only) focus we have conflated the purpose of cemeteries that are private with that of public memorials that should offer a broader view of the circumstances of the events that caused these deaths. Turning victims into heroes who may have done nothing more than go to work or school (as they were wont to do on any given day) ultimately does no service to their families and loved ones. It may very well distort the memory of the individual who, as one family member said to me, "was just a banker who lived in Connecticut, a regular guy." Simultaneously, displaying their images en masse, even if accompanied by personal remembrances, creates a sameness, a uniformity that is the opposite of what was intended.

Commemorating the victims of the latest Paris attacks presents a different set of circumstances because the sites attacked were both multiple and not in and of themselves iconic. Nevertheless, people flocked to an iconic site that was not a target, the Place de la Republique – presumably to assert cultural unity at a time of attack. People vowed to continue life as it was before. That, of course, may not be possible for quite some time in spite of the crowds that continue to gather in cafes and at the Bataclan theatre. But as plans for yet another permanent memorial to a terrorist attack evolves, it would make sense to take a longer view of what it means culturally, a look beyond the immediate victims, to the possibility of framing a dialogue that might lead to greater understanding and in any event different conversations. The ongoing focus on victims alone can lead only to a closed loop of mourning.

If we stop treating victims as heroes, they would not be dishonored. Their memory would be respected and their deaths mourned (publically and privately) . But their names would not be at the center of the memorial museums now routinely associated with these events. Instead, what should be at the center is a space for public conversations about the significance of the event and what might follow, with museum staff available to pose issues or questions and lead discussions, if appropriate. There should also be a website section and a take away paper (to be updated periodically as pertinent) that note key issues and possible future actions and relevant public programs. While documentation of terrorist attacks is important, civic dialogue – especially amongst those who view cause and effect differently – is the essential core of a democratic society.