Kevin M. Levin is an educator and independent historian based in Boston. His most recent publication is "'The Devil Himself Could Not Have Checked Them': Fighting With Black Soldiers at the Crater," in Gary W. Gallagher and Caroline E. Janney eds., Cold Harbor to the Crater: The End of the Overland Campaign (2015). Kevin is also the author of Remembering the Battle of the Crater: War as Murder (2012) and is currently working on a new book, tentatively titled, Searching For Black Confederate Soldiers: The Origins of Recent Myth. You can find him online at Civil War Memory. 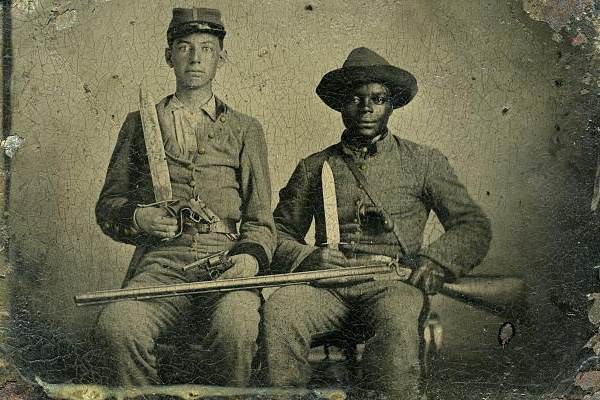 On June 1, 1864 the Richmond Daily Dispatch reprinted an item that originally appeared in the Houston Telegraph concerning reports in Northern newspapers that black men were serving as soldiers and officers in the Confederate army. The publication of the story was clearly an attempt on the part of the editors to add a little humor for their readers and to deny that the rumors had any merit. As the Civil War entered its fourth summer and as the sounds of guns grew louder, Richmonders were desperate for a little light-hearted humor. 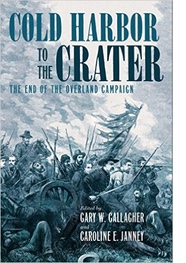 The previous month witnessed some of the most intense fighting of the entire Civil War as the Army of the Potomac, now under the command of Maj. Gen. Ulysses S. Grant, engaged Gen. Robert E. Lee's Army of Northern Virginia in continuous combat from the Rappahannock River in central Virginia to the James River near the Confederate capital of Richmond. Both armies suffered horrendous casualties, but unlike previous Union offensives, Grant remained poised and focused on destroying Lee's army. By the first of June some of Lee's men likely observed and even skirmished with the first United States Colored Troops assigned to the Union army in the East. It would be a few weeks before the first major battle would occur just outside of Petersburg, but their mere presence signaled a sharp shift in Union policy that helped to solidify for every Confederate just what was at stake in this war. Emancipation and service in the Union army threatened the very foundation of a society committed to establishing an independent slaveholding republic.

The author of the article attempted to explain away rumors of black soldiers and officers with the story of a Confederate Brigadier General in the Army of Tennessee, whose camp servant, Cuffee, was known to wear his master's "old uniform coat." "In time of battle, mounted on a spare horse of the General's, and with excitement," continued the author, "he would charge up and down the field beyond the reach of the shells." During one particular battle a sergeant approached the "sable General" with fifteen Union prisoners, "as he was careering at headlong speed over the plain." After asking where they should be taken, Cuffee replied, "Double quick the d — d rascals to the rear." Apparently, the Union prisoners "never could be convinced afterwards that Cuffee was not in the military employ of Cousin Sally Ann."

Readers could afford a brief chuckle after finishing the story owing to their shared understanding of how black men, both free and enslaved, had already been utilized by the Confederate government. Tens of thousands of slaves had been impressed by the government to work on various war-related projects such as the building of earthworks or working in foundries producing weapons as well as maintaining rail lines. The story above points to the presence of thousands of camp servants that were brought into the army by Confederate officers. These men served their masters in various capacities from cleaning to cooking and foraging for food and other supplies. On occasion, camp servants witnessed and even took part in battle, but as the account of Cuffee shows, masters were never completely comfortable with their slaves' attempt at displays of martial manhood.

Cuffee is described as riding across the field, but he does so "with excitement, which suggests that he is not completely in control and "beyond reach of the shells." Other accounts by officers suggest that white Southerners from the slaveholding class held tightly to a racialized understanding of the battlefield. White men behaved bravely on the battlefield while black men served as an extension of their master's character, but they were not expected to supersede it. To do so threatened the racial hierarchy between master and slave.

Within a few months Southerners in the army, on the home front, and in the halls of the Confederate Congress debated whether to enlist slaves as soldiers as a last ditch effort to salvage their bid for independence. For slaveowner and non-slaveowner alike, the question of whether to enlist slaves as soldiers as well as whether they could make good soldiers cut to the core of why the war was being waged.

What is important about this debate is that at no point did soldiers in the field report that blacks were already serving as soldiers. No tales of heroic acts by camp servants on the march or even on the battlefield surfaced demonstrating that slaves could make good soldiers or that they executed tactical orders within the command structure of an assault. Regardless of whether camp servants fired a weapon in the heat of battle or manned a Napoleon or assisted fallen Confederates on the battlefield this was seen by everyone engaged as a step in an entirely new direction that was fraught with danger. The Richmond Examiner spoke for many when it declared in November 1864 that, "If a negro is fit to be a soldier he is not fit to be a slave...." "The employment of negroes as soldiers in our armies, either with or without prospective emancipation," continued the editor, "would be the first step, but a step which would involve all the rest, to universal abolition."

Following a very divisive debate and with the help of Lee's endorsement, legislation was passed in March 1865 that allowed for the recruitment of slaves that had been freed by their masters. A few weeks later Lee surrendered at Appomattox Court House. Apart from a small number of men raised and briefly trained in Richmond, no black men stepped foot on a battlefield as a bona fide soldier.

One hundred and fifty years later and stories of hundreds and even tens of thousands of black Confederate soldiers can be found across the Internet on thousands of websites. In their initial statement following the violent murder of nine black Charlestonians while attending Bible study at Emmanuel AME Church in June 2015 and the publication of photographs of Dylann Roof holding the Confederate flag, the South Carolina Division, SCV offered the following reminder: “Historical fact shows there were Black Confederate soldiers. These brave men fought in the trenches beside their White brothers, all under the Confederate Battle Flag."

The SCV offered this argument not only to stem the tide of calls to lower the Confederate flag in Columbia, but to suggest that the flag has nothing at all to do with racial divisions in South Carolina. Since black men fought willingly for the Confederacy, the argument runs, the preservation of slavery and white supremacy could not have been its goal. The Confederate flag—properly understood—ought to unite black and white South Carolinians.

Such an argument would have been unrecognizable to readers of the Richmond Daily Dispatch in 1864, who enjoyed a little laugh at Cuffeey's expense. Cuffeey's story reinforced what many white Southerners understood as a natural racial hierarchy that was worth going to war to protect. The debate about whether slaves could or even should be soldiers cut to the core of how white Southerners understood themselves in relationship to their black neighbors. We would do well to remember that real Confederates never knew any black Confederate soldiers and why.