The Unknown Chinese-American Heroine of September 11, 2001 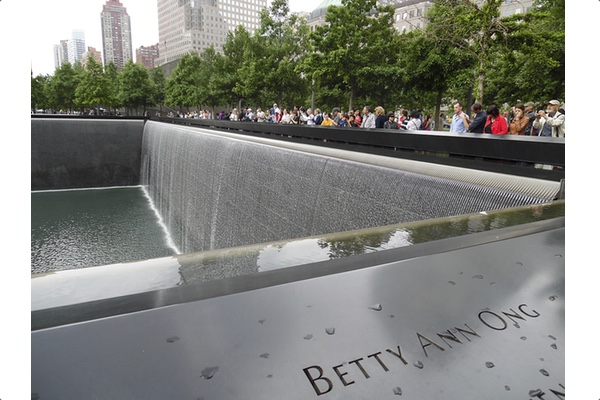 With that heartbreaking statement, spoken by a North Carolina-based American Airlines employee, one of the greatest tragedies in U.S. history began.

It was 7:59 on a radiant September morning, 14 years ago, when American Airlines Flight 11 lifted off from Boston’s Logan Airport, bound for Los Angeles, California.

On board were 81 passengers, two pilots and a cabin crew of nine. Sitting in Business Class were Mohammed Atta and four fellow terrorists. Less than an hour after take-off, Atta deliberately flew the Boeing 767 into New York's World Trade Center’s North Tower.

The Sept. 11, 2001 terrorist attacks killed nearly 3,000 people in New York and Washington, D.C. Aside from the Americans killed, citizens from more than 90 other nations were also murdered.

But for San Francisco’s Ong family the tragedy was dreadfully personal. The “her” referred to by American employee Nydia Gonzalez was Flight Attendant Betty Ann Ong—the Ong family’s beloved sister and daughter.

Ong was a victim of the terrorists. But she was also the first hero of that fateful day. Many people have heard of Todd Beamer’s courage (“Let’s roll”). But relatively few know about Betty Ong’s.

Within minutes of the hijacking, and despite the murderous mayhem on board, Ong bravely grabbed a crew phone to call colleagues on the ground.

For the next 23 minutes, she gave authorities a detailed account of what was happening. Ong calmly told ground staff there were possibly four hijackers of Middle Eastern extraction on board.

Ong also reported on the carnage taking place—the First Class galley attendant, stabbed; the purser, stabbed. The terrorists also slashed the throat of a passenger, who was bleeding profusely. The hijackers locked themselves in the cockpit.

Amid the mid-air horror, Ong remained cool. She identified the seats the terrorists had occupied, enabling the FBI to immediately learn the hijackers’ passport details.

Fifteen minutes after Ong first alerted the world to what was happening, the big Boeing suddenly lurched, tilting wildly. She said the pilots were probably no longer flying the airplane. The 767 approached Manhattan, flying ever lower.

Still on the line, Ong said in a composed voice: “Pray for us. Pray for us.”

Her ground contact asked: “What’s going on, Betty? Betty, talk to me. Are you there? Betty?”

Born in San Francisco’s Chinatown, Betty Ong enjoyed an idyllic childhood. The youngest sibling, she was doted on by elder brother Harry and sisters Cathie and Gloria. Their parents, Harry Snr, and Yee-gum Oy, owned a small grocery store where they worked long hours.

As a teenager, Ong grew to be a tall, attractive girl. Though self-conscious about her willowy 5’ 9” height, it helped her excel in basketball and volleyball.

“Everyone who knew Betty really loved her,” says Harry, a youthful-looking pharmacist in his fifties.

Sister Cathie agrees: “Bee made everybody feel like they knew her right away.”

“When we spoke to colleagues who had flown with Betty, they told us that on late night cross-country flights many flight attendants relax after serving dinner,” Harry says. “But Betty always strolled the cabin, especially mindful of older passengers, and always checked to see if there was anything they needed, an extra blanket, a glass of water, a cup of tea.”

Even on her last day, Betty Ong took time to look after an elderly person. In an e-mail to Ong’s family, Joyce Toto wrote: “I never knew Betty. However, my dad did. He works for American Airlines in Boston as a gate guard; a gate which Betty passed to go to work every day. On that awful day, Betty had kissed my 78-year-old dad on the cheek, said goodbye and asked him to wish her luck. I can’t tell you the joy she brought to this man’s life every day with her smile. You see, my mum had just passed away, and Betty cheered him up daily.”

Ong’s family always felt she was their hero. But it wasn’t till months after the attacks that they also found she was the nation’s hero. It was when they heard the tape of Ong’s urgent message played before the U.S. Government’s 9/11 Commission in New York City. Hearing her calm poised voice relating vital information about the hijacking, Commission chairman Thomas Kean declared: “Betty Ong is a true American hero.”

Making a formal statement before the 9/11 Commission, American Airlines staffer Gonzales said: “With the assistance of her fellow crew members, Betty was able to provide us with vital information that would later prove crucial to the investigation. Betty’s selfless acts of courage and determination may have saved the lives of many others. She provided important information which ultimately led to the closing of our nation’s airspace for the first time in its history.”

Discussing Ong’s courageous performance, Ms Gonzales said she showed absolutely no fear at all during the 23-minute conversation.

For Ong’s parents, the immense pain never abated. Harry often found his elderly father quietly weeping. At the thought of that, his voice, too, cracks. “It’s not easy.”

The pain will always be there, but the Ong Family can be genuinely proud that their beloved daughter, and sister, was that rare person who embodied both exceptional courage and uncommon kindness. She literally made the world a better place simply by being in it.