Benjamin Hellwege is a Ph.D. candidate in the History Program at The Graduate Center, CUNY. 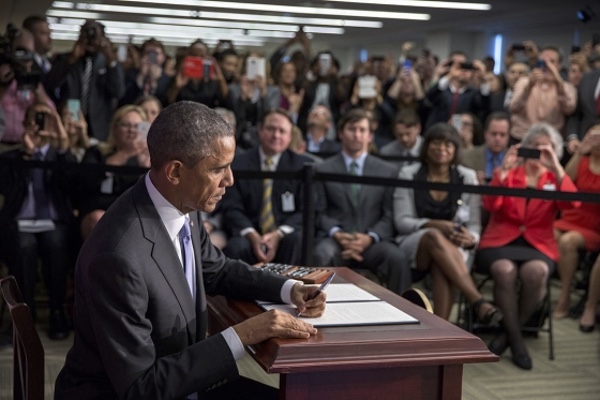 In December 2013, the New York Times reported the plight of four former administrators at Rutgers University who had all been dismissed from their positions. The four individuals – Mark Kerr, Dorothy Kerr, Chrystal McArthur, and Richard White – had been long–time university employees, and all were either approaching or past the age of 60 years old at the time of their dismissal. Despite years of positive annual reviews, all four were swiftly terminated after a personnel change in the university’s administration. Subsequently, the former administrators filed an age discrimination lawsuit against Rutgers in January 2013. (The university has denied that age discrimination played any role in the dismissal of the four administrators).

While the story of the Rutgers administrators has a familiar ring to it – the economic and social troubles of older men and women faced with limited options for continued participation in the workforce after becoming unemployed but before becoming eligible for Social Security and Medicare – it was only the latest in a long line of news stories starring older workers and hostile workplaces. Since the beginning of the economic crisis in 2008, the New York Times, along with a phalanx of other media outlets (including the Washington Post, NBC, and Forbes magazine) have documented the dilemma of older workers struggling to maintain or find steady employment. Moreover, official statistics from the U.S. Equal Employment Opportunity Commission (EEOC) confirm that age discrimination charge filings are on the upsurge. In fiscal year 1997, there were 15,785 age discrimination charges filed; by fiscal year 2013, the number of charges filed had risen to 25,957, an increase of 35%.

Less heralded, though, is the strong likelihood that the rising number of age discrimination filings is also a reflection of changing long-term demographics in the United States. According to the U.S. Census Bureau, in 2012, there were 43.1 million Americans over the age of 65, and that population is expected to double to 83.7 million by 2050. While the rising number of older people will present a myriad number of challenges for American society, this is not the first time that age discrimination has been the subject of national interest. In the late 1950s and into the 1960s, policymakers commenced a sustained series of efforts to combat age discrimination in the workplace. These efforts largely coalesced in the passage of local ordinances and state legislation banning age discrimination as well as the federal-level Age Discrimination in Employment Act (ADEA) of 1967.

Examining these past efforts may therefore offer some guidance for future attempts to address age-based discrimination, especially given the increasingly widespread view in the legal and economist communities that the ADEA has become largely ineffective in serving its stated purpose. Moreover, this ineffectiveness has been exacerbated by the U.S. Supreme Court, which in a 5-4 decision in the 2009 case Gross v. FBL Financial Services, Inc. made it significantly more difficult for plaintiffs to prove age discrimination by raising the burden of proof needed to do so. Like other recent Supreme Court decisions which have curbed the scope of legislation enacted during the 1960s, the Gross decision has done much to hollow out the ADEA.

In light of the ADEA’s weakening by the Supreme Court, it may be worth revisiting the law’s origins in search of an alternative solution. Like the related Civil Rights Act of 1964, the ADEA grew out of earlier federal attempts to directly address the problem of workplace discrimination. Just as the Civil Rights Act of 1964 built upon the legal precedents set by previous presidential executive orders, so too did the ADEA.

In order to understand the ADEA and its present-day troubles, therefore, we must first return to February 12th, 1964. On that date, President Lyndon B. Johnson issued Executive Order 11141, which asserted that

the Federal Government can and should provide maximum leadership…by adopting [the] principle [of equal employment opportunity for older persons by all sectors of the economy] as an express policy of the Federal Government not only with respect to Federal employees but also with respect to persons employed by contractors and subcontractors engaged in the performance of Federal contracts.

The order, which had been proposed by an internal Department of Labor working group headed by Secretary of Labor W. Willard Wirtz the previous year – attracted sustained objection from representatives of the Department of Defense and the U.S. General Services Administration (GSA), who vigorously contended that the inclusion of any real enforcement language would require rewriting millions of pre-existing federal contracts as well as any new contracts, a major step which neither department was willing to countenance. (The Department of Defense and the GSA were at the time responsible for a combined total of approximately eight million contracts, which constituted the overwhelming majority of federal contracts.) Eager to mollify the Defense Department and the GSA, the Department of Labor acceded to their demands to ensure that the order would have no practical effect on existing or future federal contracts. In its final form, Executive Order 11141 was stripped of any enforcement language, and was not placed under the supervision of any federal agency.

Unfortunately, because Executive Order 11141 was so deeply compromised, it attracted limited wider attention or usage after its proclamation. Unlike Executive Order 10925 (issued by President Kennedy in March 1961), which proved to be a milestone event in the long struggle for civil rights, the few attempts by older workers to make use of Executive Order 11141 ultimately came to naught. And, despite occasional and vague references to the order in subsequent years, the Johnson administration subsequently chose not to revisit or expand upon it.

Instead, within four years of the announcement of Executive Order 11141, the Johnson administration secured the enactment of the Age Discrimination in Employment Act in 1967, which fixed numerous problems leftover from the failure of Executive Order 11141. For example, the Department of Labor (later the EEOC) was charged with the responsibility of enforcing the ADEA, thus correcting one of Executive Order 11141’s major structural defects. Furthermore, as one recent study of the ADEA has observed, the law created a uniform national statute that supplemented the regulatory “patchwork of state laws” already in place, a goal which the architects of Executive Order 11141 had hoped for. While the ADEA did not end age discrimination in the workplace, it did ultimately become (in the words of a subsequent study) “the nation’s most important mechanism for protecting the employment rights of older workers.”

Yet the ADEA might never have come into being without the failure of Executive Order 11141. Because the order failed to achieve its stated purpose, a legislative solution to the problem of age discrimination in the workforce became necessary. Consequently, in the half century since its enactment, the ADEA provided a different foundation for official action to combat age discrimination, though one that has proven to be more problematic in recent years. As the ADEA and other landmark pieces of Great Society legislation continue to be assaulted by a hostile judiciary – and with attempts to update the ADEA languishing on Capitol Hill despite the repeatedly demonstrated difficulties of unemployed older workers in securing new employment – it may well be time to consider revisiting and revising Executive Order 11141.