If Obama Faces Impeachment over Immigration, Roosevelt, Truman, Eisenhower and Kennedy Should Have as Well

John Dickson was Deputy Chief of Mission in Mexico and Director of the Office of Mexican Affairs at the Department of State and is a recent graduate of the University of Massachusetts public history program. 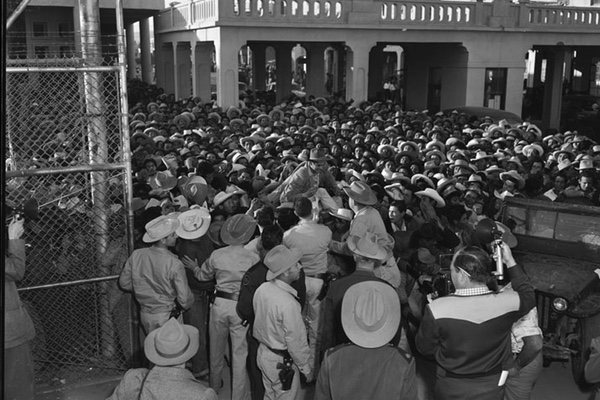 When President Obama announced last week following the mid-term elections that he would use his executive powers to make immigration changes, the incoming Senate Majority leader Mitch McConnell warned that “would be like waving a red flag in front of a bull.”  Representative Joe Barton from Texas already saw red, claiming such executive action would be grounds for impeachment.

If so, then Presidents Roosevelt, Truman, Eisenhower and Kennedy should all have been impeached.   All four skirted Congress, at times overtly flouting their administrative prerogative, to implement a guest worker program.

This was the “Bracero” agreement with the Government of Mexico to recruit workers during World War II, starting in 1942 but lasting beyond the war, all the way until 1964.  At its height in the mid 1950s, this program accounted for 450,000 Mexicans per year coming to the U.S. to work, primarily as agricultural workers.

Several aspects of the Bracero program stand out as relevant to the impasse on immigration reform over the last 15 years.  First, the program began with executive branch action, without Congressional approval.  Second, negotiations with the Mexican government occurred throughout the program’s duration, with the State Department taking the lead in those talks.  Finally, this guest worker initiative, originally conceived as a wartime emergency, evolved into a program in the 1950s that served specifically to dampen illegal migration.

Even before Pearl Harbor, growers in the southwest faced labor shortages in their fields and had lobbied Washington to allow for migrant workers, but unsuccessfully.  It took less than five months following the declaration of war to reverse U.S. government intransigence on the need for temporary workers.  Informal negotiations had been taking place between the State Department and the Mexican government, so that an agreement could be signed on April 4, 1942 between the two countries.  By the time legislation had passed authorizing the program seven months later, thousands of workers had already arrived in the U.S.

The absence of Congress was not just due to a wartime emergency.  On April 28, 1947, Congress passed Public Law 40 declaring an official end to the program by the end of January the following year.   Hearings were held in the House Agriculture Committee to deal with the closure, but its members proceeded to propose ways to keep guest workers in the country and extend the program, despite the law closing it down.  Further, without the approval of Congress, the State Department was negotiating a new agreement with Mexico, signed on February 21, 1948, weeks after Congress mandated its termination.  Another seven months later, though, Congress gave its stamp of approval on the new program and authorized the program for another year.  When the year lapsed, the program continued without Congressional approval or oversight.

The Bracero Program started out as a wartime emergency, but by the mid-1950s, its streamlined procedures made it easier for growers to hire foreign labor without having to resort to undocumented workers.  Illegal border crossings fell.

Still, there were many problems making the Bracero Program an unlikely model for the current immigration reforms.  Disregard for the treatment of the contract workers tops the list of problems and became a primary reason for shutting the program down.  However, the use of executive authority in conceiving and implementing an immigration program is undeniable.

The extent of the executive branch involvement on immigration was best captured in 1951, when a commission established by President Truman to review the status of migratory labor concluded that “The negotiation of the Mexican International Agreement is a collective bargaining situation in which the Mexican Government is the representative of the workers and the Department of State is the representative of our farm employers.”  Not only was the executive branch acting on immigration, but they were negotiating its terms and conditions, not with Congress, but with a foreign country.  Remarkable language, especially looking forward to 2014 when we are told that such action would be an impeachable offense.

Senator McConnell used the bullfighting analogy because the red flag makes the bull angry; following the analogy to its inevitable outcome is probably not what he had in mind.  The poor, but angry bull never stands a chance.  In this case, though, it won’t be those in Congress who don’t stand a chance; it will be those caught in our messy and broken immigration system.