The Era of Bad Feelings? 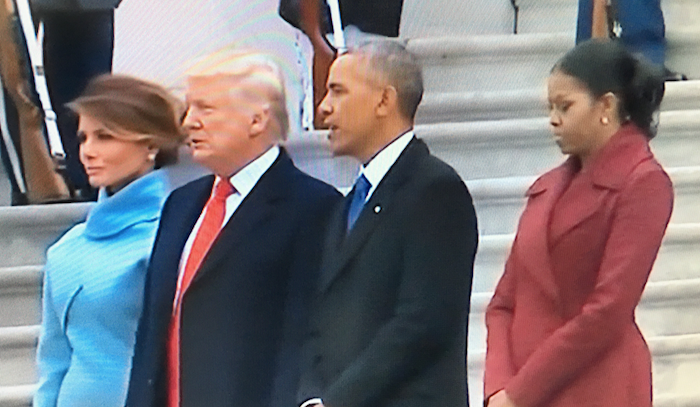 Mark S. Byrnes is professor of History at Wofford College in Spartanburg, SC.

Something remarkable in American presidential history happened on Inauguration Day.

No, not the obvious one. The nation’s focus is understandably on the fact that Donald Trump, someone with no previous political, diplomatic, or military experience, took the oath of office. Something else, that has happened only once before in our history, happened.

We saw the completion of a third consecutive two-term presidency.

The last time this happened, Thomas Jefferson and John Adams were still alive: March 1825, when James Monroe finished his second term. In the nearly 200 years since, Americans have hardly seen such relative stability in the presidency. Someone born in February 1993 has known only three presidents. By contrast, an American born in July 1974 had three presidents before reaching the age of 3. (There was one other comparable period, from 1933 to 1961, when the United States also had only three presidents. But Harry Truman was only elected once, and did not quite serve two full terms.)

It is somewhat remarkable and worth noting that after experiencing 7 presidencies in 32 years, we have had only 3 in the last 24. Part of the reason is that we are also now living through the single longest period in our history without a president having died in office. It has been over 53 years since JFK’s assassination. The previous record came at the beginning: just under 52 years between Washington’s inauguration on April 30, 1789 and William Henry Harrison’s death on April 4, 1841.

On the surface, these two eras, 1801-1825 and 1993-2017, are not terribly similar. The first was known as the Virginia Dynasty (because all three presidents were Virginians), and was dominated by a single political party, Jefferson’s Democratic-Republicans. That era saw the effective death of the opposition party, the Federalists, who failed to even field a candidate in the 1820 election—in part because the presidency of James Monroe saw a merging of the ideologies of those two founding political parties during what was called “The Era of Good Feelings.”

No one on either side of the current political divide would be likely to use that phrase to describe recent American history. These past 24 years have not only seen the presidency pass back and forth between the two major parties; it has also been a time of seemingly ever-escalating partisanship. Neither party has come close to the dominance the Democratic-Republicans achieved. While the Democrats have won the popular vote for president in 6 of the last 7 elections, they control no part of the federal government. While the Republicans have nominal control of the federal government, their president is someone who effectively engineered a hostile takeover of the party, and may well end up frequently at odds with the Republican leadership in Congress. Arguably, both parties are in serious trouble.

So “stability” might not be quite the right word to use to describe these past 24 years.

Nonetheless, it is true that the American people have not sent an incumbent president packing since 1992, and if Obama’s approval ratings (60%) as he leaves office are any indication, they might not have done so this year if not for the 22nd Amendment.

So how do we reconcile that reality with the undeniable fact that the incoming president is, in just about every imaginable way, the anti-Obama who has pledged to undo much of what Obama’s presidency accomplished? In such a close election, anything could have made a difference.

What is undeniable, however, is that 46% of the public voted for an inexperienced outsider who not only viciously derided his predecessor and opponent, but rejected mainstream politics entirely, who violated nearly every political norm, and who did not fit neatly into either political party. In that sense, his victory was a rejection of American politics as a whole, a repudiation of Washington. Many people seem to have voted for Trump precisely because they don’t like either party. They have decided American politics is broken, and Trump promised to blow up the whole “corrupt” system. They think “the system” does not work for or represent them.

That sensibility might be what connects today to the end of the Virginia Dynasty.

In 1824, “The Era of Good Feelings” rather quickly collapsed. After an uncontested election in 1820, there were four major candidates for president in the election of 1824, all of whom won at least two states and at least 11% of the popular vote. None of them, however, got either an electoral college or popular vote majority, throwing the election into the House of Representatives for the only time in American history.

American politics fell into chaos. The House voted to make Secretary of State John Quincy Adams president, despite the fact that Andrew Jackson received the single largest number of both electoral college and popular votes. Outraged Jacksonians charged that a “corrupt bargain” between Adams and Speaker of the House Henry Clay gave the former the presidency and the latter the coveted office of Secretary of State (Adams was the fourth consecutive president to have previously led the State Department). Monroe’s so-recently triumphant Democratic-Republican Party was hopelessly shattered. That splintering led to the Second Party System, with the supporters of Andrew Jackson creating the Democratic Party, and his opponents eventually forming the ideologically diverse (and never terribly robust) Whig Party.

Only eight years earlier, it appeared to James Monroe that the nation enjoyed near perfect unity. In his first inaugural address, he stated: “Equally gratifying is it to witness the increased harmony of opinion which pervades our Union. Discord does not belong to our system…. The American people ... constitute one great family with a common interest.” The events of the mid-to-late 1820s gave the lie to that wishful thinking. Monroe failed to see the sectional and economic forces that were undermining the unity he thought he saw. The stability of the Virginia Dynasty was an illusion.

Trump’s ascendance may represent a similar—yet also distinctly different—phenomenon: a product of forces building beneath the surface that mainstream political leaders could not see. In the early 1820s, the appearance of unity masked division. In our times, it may be that while the two parties saw themselves as bitterly opposed to each other, some Americans saw them as indistinguishable, as the “Democratic-Republican” party. The ideological battle that has consumed the political class was, to at least some voters, so much indistinct political noise to them. They blamed both parties for their sense that little of substance gets done in Washington (and were impatient with those who tried to point out the nihilistic and norm-destroying obstructionism of the anti-Obama forces). They saw Clinton, Bush, and Obama as belonging to an undifferentiated “Washington establishment,” and thus the prospect of another Clinton or Bush in 2016 was just more of the same. They were hardly a majority—in fact, nowhere near one—but when combined with die-hard Republicans who would vote for whatever name had an (R) after it, they put Trump just barely over the top.

With Trump taking the oath of office, more manifestly unprepared for the responsibilities he is assuming than anyone in American history, we all will get to witness what happens when someone who thinks he has a mandate to shake things up becomes the most powerful person in the world. Maybe his supporters will be right, and he will be a breath of fresh air and revive a moribund political system. Based on all we’ve seen of Trump in his campaign and through the transition, however, I fear it is more likely to produce a result of the kind that James Monroe feared 200 years ago, even as he extolled American unity in his first inaugural address:

“It is only when the people become ignorant and corrupt, when they degenerate into a populace, that they are incapable of exercising the sovereignty. Usurpation is then an easy attainment, and an usurper soon found. The people themselves become the willing instruments of their own debasement and ruin.”