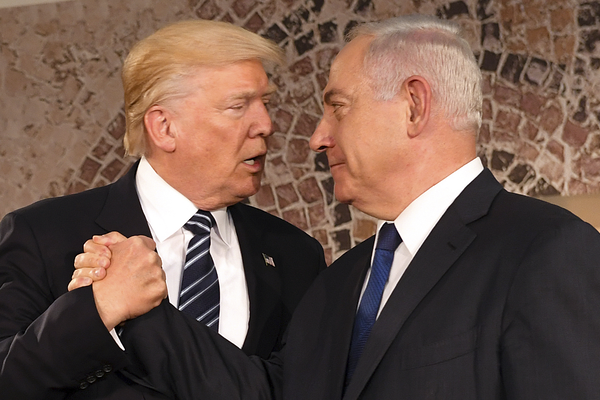 The trend in world history since the Second World War has been toward secularism and away from religious control politically, socially and culturally. With Iran as a notable exception, most nations throughout the world have shifted to some extent toward Thomas Jefferson’s axiom of “separation of church and state.”

However two highly-developed nations have recently bucked the secular trend. Israel and the United States have elected leaders, namely Trump and Netanyahu, who attempted to reinvigorate religion in their respective societies in terms of law, culture and political policies. What is it about the political systems and culture of these countries that enabled religious constituencies to gain ascendancy with a promise of fundamentalist revival? What is it about these two men, Netanyahu and Trump that enabled their rise along with this revival?

In 1948, Israel was founded as the Jewish state. However its original leaders were secular Jews led by a large socialist party under David Ben-Gurion. Israel’s declaration of independence, The Declaration of the Establishment of the State of Israel, states that Israel is the birthplace of the Jewish people and the place where Jewish spiritual, religious, and cultural identity was shaped. This document also created a secular democracy along the lines of European democratic nation-states with freedom of religion. As a Jewish state however, religious political influence was always prevalent. For example, marriages had to be performed by Orthodox rabbis and businesses were encouraged to close on Shabbat, the Jewish Sabbath.

The United States was also founded by people who belonged to a religion, mostly white Anglo-Saxon Protestants of the Anglican Church. But as in the case of Israel, these were secular people, not regular church-goers. They were deists, believing that God gave human beings the intelligence to solve their problems without prayer. Given their secular bent, the Founding Fathers drafted a Constitution in which religion was mentioned only once. Article VI Clause 3 states that there is no religious test for seeking public office. Later, the Bill of Rights was added to the Constitution with the First Amendment providing that “Congress make no law respecting an establishment of religion or prohibiting the free exercise thereof.” Separation of church and state was established.

From the founding of Israel until 1977, the secular Jews remained in power. These were people identifying as Jews with a generally low level of observance, other than the holidays of Rosh Hashanah, Yom Kippur and Passover. The ruling Labor Party, with a coalition of secular parties, held a majority in the Knesset, the Israeli parliament.

Then came the pivotal general election of May 1977, signaling a turn toward religious fundamentalism. The Likud Party under Menachem Begin appealed to Mizrahi Jews, Middle Eastern and Central Asian Jews suffering under discrimination in Israeli society. This coalition that contained religious parties won a Knesset majority. The Likud campaign attracted the economically downtrodden, the more religiously observant Jews, and those fearful of the Arab world surrounding the Jewish state. The coalition would go on to elect more prime ministers, leading up to Benjamin “Bibi” Netanyahu.

Born to a secular Jewish family in Israel, Netanyahu has been prime minister twice, between 1996-1999 and 2009-2021. Now at age 73, he is returning to that office. Netanyahu is not religiously observant, and seemingly wears kippah and recites prayers only when it’s part of his job. However, he depends on Orthodox Jewish political support for his Knesset majority. The Orthodox are a significant political force as, according to the Pew Research Center, they comprise 18 percent of the Israeli population. In the recent election, Netanyahu combined with the Religious Zionist Party and other religious parties, which stand against any concessions to the Palestinians and for an end to Israel’s independent judiciary. Religious Zionist leader Itamar Ben-Gvir, a resident of a West Bank settlement and member of the Otzma Yehudit (Jewish Power) party, is the new government’s Minister of National Security.

America made a remarkably similar increase in religious fundamentalist influence in government at approximately the same time Israel did. In 1980, religious conservatives organizing in great numbers chose Ronald Reagan as their vehicle for ascendency as abortion became their chief issue. Their choice of candidates was odd, as Reagan, the once Hollywood womanizer, was never a churchgoer in his adult life. His opponent was Jimmy Carter, who had a history of going to a Baptist church every Sunday and teaching Sunday school. With inflation as the chief issue, Reagan won the presidency and pleased his conservative religious followers with his policies and judicial appointments. Religious conservatives remained a potent force in the Republican Party electing two presidents named Bush as in Israel where the religious parties continued electing prime ministers. Then came Trump.

Never a church-goer, and with little knowledge of Christian doctrine, Trump courted the religious base as they turned out in the presidential primaries. Early in his campaign, Trump visited Jerry Falwell, Jr.’s Liberty University. In his speech, Trump referred to a biblical passage from Second Corinthians etched on university buildings, but called it “Corinthians Two.” But that didn’t matter because Trump promised to protect Christianity. The fundamentalist base turned out for him in the primaries, seeing Trump as having the best chance to appoint judges to overturn Roe v. Wade and stop what the religious right calls the war on religion.

Two countries followed remarkably similar paths in an attempt to reverse secularism. In both countries, the religious right found leaders who were not religiously observant but were eager to win power, and promised to support their religious, cultural, and political ideology in order to do so. Netanyahu has had the political skill to rise in and hold power in his party, and when he took certain political and cultural positions, the religious right joined him to achieve power. When Trump, through his celebrity status, became a major candidate for the presidential nomination and took positions favored by the evangelical, fundamentalist, or religious right, the religious fundamentalists joined him and helped elect a president.

Furthermore in both countries, the religious fundamentalists wanted to achieve power and influence so badly that they overlooked the moral failings of their political leaders. As Netanyahu led his party in a general election, he was on trial for bribery among other forms of corruption. Netanyahu, who has been married three times and divorced twice, has had a marital history riddled with sex scandals. Trump has also had his legal problems, including having both his Trump University and Trump Foundation sued and closed. Currently, Trump confronts a myriad of criminal investigations involving his business affairs and his tenure in public office. Trump too has been married three times and divorced twice. His life is riddled with sex scandals involving a porn star and numerous accusations regarding sexual assault and even rape in one case. But the devoutly religious support these two men.

Finally, religious fundamentalism gained influence in Israel and the United States through political systems with peculiarities permitting a minority to gain power. In the latest election, Netanyahu’s Likud Party, which is not overtly religious, won 32 seats in the 120 seat Knesset. The religious parties won fewer than that. It is the combination of these parties that produced a majority, providing the fundamentalist right influence over government. Trump gained power by winning the presidential primaries with only 28.5 percent voter turnout. He won the presidency with 46 percent of the total vote; only 26 percent of the vote was from the religious fundamentalists or evangelicals. In Israel the Orthodox are a growing share of the population as they have more children, but still, as in the United States, it took undemocratic mechanisms for the religious right to gain great influence to overcome secularism. In Israel it is a parliamentary system where small religious parties combine with a larger party to form a government that provides  them outsize power. In the United States, a primary system with a small voter turnout, combined with the Electoral College, can give a minority religious right ascendancy over secularism.