Bye Bye, World: Will Humanity Continue to Tolerate the Risk of Nuclear War? 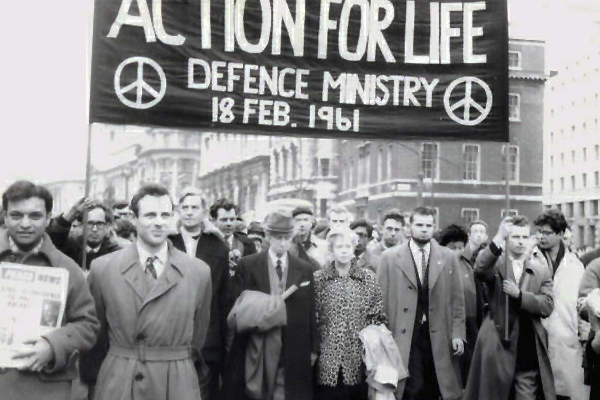 It’s been a long time since the atomic bombings of August 1945, when people around the world first realized that global civilization stood on the brink of doom.  This apocalyptic ending to the Second World War revealed to all that, with the advent of nuclear weapons, violent conflict among nations had finally reached the stage where it could terminate life on earth.  Addressing a CBS radio audience in early 1946, Robert Hutchins, chancellor of the University of Chicago, summed up the new situation with a blunt warning:  “War means atomic bombs.  And atomic bombs mean suicide.”

With millions of people jolted awake by the atomic bombings and anxious to stave off worldwide catastrophe, calls for banning nuclear weapons and for building a federation of nations strong enough to keep the peace were widespread.  Organizations among antinuclear scientists, world government advocates, and peace proponents emerged and flourished in the United States, as well as in much of the world.  Often working together in the same peace and disarmament campaigns, activists in these organizations frequently adopted a common rallying cry:  “One World or None!”

For a time, these activists had public opinion on their side.  In August 1946, a Gallup poll found 54 percent of American respondents favored (and only 24 percent opposed) turning the United Nations into “a world government with power to control the armed forces of all nations.”  Similar polls in other nations during the late 1940s reported comparable results.

In practice, the efforts of activists went toward transforming the new United Nations into an institution that had the power to rid the world of nuclear weapons and to end the ancient practice of war.  Thus, in the United States, where, by 1949, United World Federalists had some 47,000 members, it managed to get 111 members of the House of Representatives and 21 Senators to co-sponsor a resolution to turn the United Nations into “a world federation” with enough power “to preserve peace and prevent aggression.”

Even so, while giving lip service to nuclear disarmament and peace, the world’s governments―and particularly those of the “great powers”―weren’t ready for this dramatic a departure from their traditional practices.  After all, for thousands of years, competing territories, and later, nations, had been accustomed to waging wars and using the most powerful weapons available to them in these conflicts.

Yes, at times, the governments of the great powers were forced by popular pressure to curb their nuclear ambitions.  In the late 1950s and early 1960s, public protest campaigns against nuclear weapons testing led to the world’s first nuclear arms control agreement (the Partial Test Ban Treaty of 1963), to the nuclear Nonproliferation Treaty of 1970, and to the beginning of Soviet-American détente.  Similarly, public protest campaigns in the early 1980s against the revived nuclear arms race led to major nuclear disarmament agreements (the INF Treaty and the START I and II treaties) and to the end of the Cold War.

But, despite these concessions, the governments of the major powers weren’t ready to dispense with nuclear weapons or, for that matter, with war.  Consequently, as popular protest ebbed, they gradually returned to their customary behavior.  Starting about a decade ago, they ceased signing nuclear arms control and disarmament agreements.  Instead, they began scrapping them, including the INF Treaty, the Open Skies Treaty, and the Iran nuclear agreement.  Meanwhile, they commenced a race to “modernize” their nuclear arsenals with the production of new nuclear weapons possessing greater speed, maneuverability, and accuracy.  Also, to intimidate other nations, their leaders—most notably Donald Trump and Vladimir Putin, who commanded the world’s two largest nuclear arsenals―openly threatened to attack these nations with nuclear weapons.

Even before the Russian invasion of Ukraine, the editors of the Bulletin of the Atomic Scientists set the hands of their famed “Doomsday Clock” at 100 seconds to midnight, the most dangerous setting since the clock’s appearance in 1947.

Of course, the world could yet be saved by what Albert Einstein termed “a new type of thinking” and, decades later, by what Mikhail Gorbachev called “the new thinking.”  Based on the threat nuclear weapons pose to human survival, this approach entails abolishing nuclear weapons and enhancing global governance to end their motor force, war.  The UN Treaty on the Prohibition of Nuclear Weapons, snubbed by the nine nuclear powers but now signed by 91 nations and ratified by 68 of them, would, if enforced, finally lift the nightmare of nuclear destruction from the people of the world.  And a strengthening of the United Nations as the guarantor of international security would help to end the long-term practice of powerful nations waging war whenever their governments felt like it.

As things now stand, however, we’re once more enmeshed in the dire situation so starkly revealed in August 1945:  While nuclear weapons exist, any war can turn into a nuclear holocaust.  Unless the people of all nations, recognizing the peril of universal death, demand the establishment of an international organization capable of enforcing policies of disarmament and peace, then, sooner or later, the time will come to say “bye-bye world.”