Another Documentarian's Perspective on "The U.S. and the Holocaust"

Martin Ostrow has been an award-winning documentary producer, writer and director for public, commercial and cable television for more than 30 years. 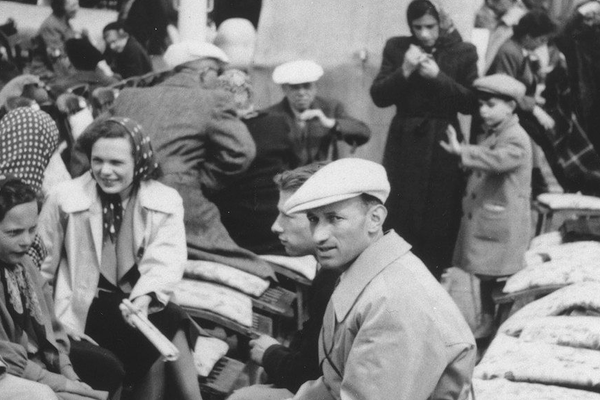 Jewish refugees from Germany aboard the St. Louis. Nearly all of the 907 passengers were denied entry first to Cuba and then to the United States and Canada in 1939. Returned to Europe, 254 would become victims of the Holocaust.

As the producer and director of a PBS film on America’s response to the Holocaust some years ago, I was at first delighted to learn that Ken Burns has now likewise made a film for broadcast on PBS about how our country responded to the Nazi genocide. But some advance publicity for the broadcast raises questions as to whether his film will accurately portray key issues such as U.S. refugee policy and the failure to bomb Auschwitz.
My film, America and the Holocaust: Deceit and Indifference, was first broadcast in 1994 as part of the PBS history series The American Experience. I have been most gratified that it has become a staple for American history and Holocaust education in many secondary schools around the country. Ensuring that young people learn about these difficult periods in our country’s history is essential to our future as a morally responsible nation.
When I set out to tell the complex and troubling story of our nation’s response to the Holocaust, I believed it would be most effective to chronicle those events through the experience of a single person.
I was fortunate to discover the moving story of Kurt Klein, a German Jew who immigrated to America in 1937 at age 17, and then spent several years struggling against a wall of Roosevelt administration obstacles that stood in the way of rescuing his parents from Nazi Germany. My film examined the profound social, political and economic factors that led the American government, along with much of American society, to turn its back on the plight of the Jews.
America and the Holocaust explored the decisions that President Roosevelt and his State Department made to block news about the growing genocide, as well as to keep Jewish immigration drastically below the legal limits that the existing quota system allowed.
That policy’s result: nearly 200,000 Jews, eligible for entry to America, such as Kurt Klein’s parents, were prevented from immigrating and were murdered in the Holocaust.
Not surprisingly, there were some viewers at the time whose fond memories of FDR—a fondness I have always shared—made it difficult for them to accept the president’s disturbing choices.
For filmmakers, one of the most important elements in the process of making a historical documentary is to have as our advisors historians who are experts in the subject material.
I was fortunate to have the late David S. Wyman as my main historical advisor. As the author of the definitive work in this field, The Abandonment of the Jews, Prof. Wyman was able to bring to our collaboration a comprehensive and nuanced appreciation of the historical issues and materials.
For The U.S. and the Holocaust, Ken has worked with writer Geoffrey Ward, his longtime collaborator. I hope they have examined the historical research published in the years since my film came out. And that they have made room in their expansive documentary for some of the uncomfortable truths about FDR, such as remarks about Jews behind closed doors. That information may help us better understand Roosevelt's decisions concerning Jewish refugees.
Inevitably, portions of The U.S. and the Holocaust will echo the social, political, economic story we told in 1994 about what America was like during the Roosevelt years and how that impacted the U.S. government’s response to events overseas. The racism, antisemitism, and isolationism of those years— found in both political camps—is by now a well-known story.
But what will merit special scrutiny in the new Ken Burns film is how he presents the key controversies:
Does he attempt to blame “American society” — as if the president was a helpless captive of public opinion?
Does he attempt to blame everything on the State Department -- as if that branch made its own foreign policy?
Does he make it seem as if the immigration quotas in themselves were the problem, instead of acknowledging how FDR’s policies kept the quotas vastly unfilled?
Does he convey the impression that bombing the railways leading to Auschwitz was too difficult to accomplish, when we know that U.S. planes bombed railroad lines throughout Europe—with multiple bombing raids on German oil factories in the vicinity of Auschwitz, some less than five miles from the gas chambers…?
Like many other Americans, I will be watching closely to see if The U.S. and the Holocaust honestly portrays these issues or fails to confront the difficult truths that need to be faced.
comments powered by Disqus